After 2 decades of sexual assault in military, no real change in message 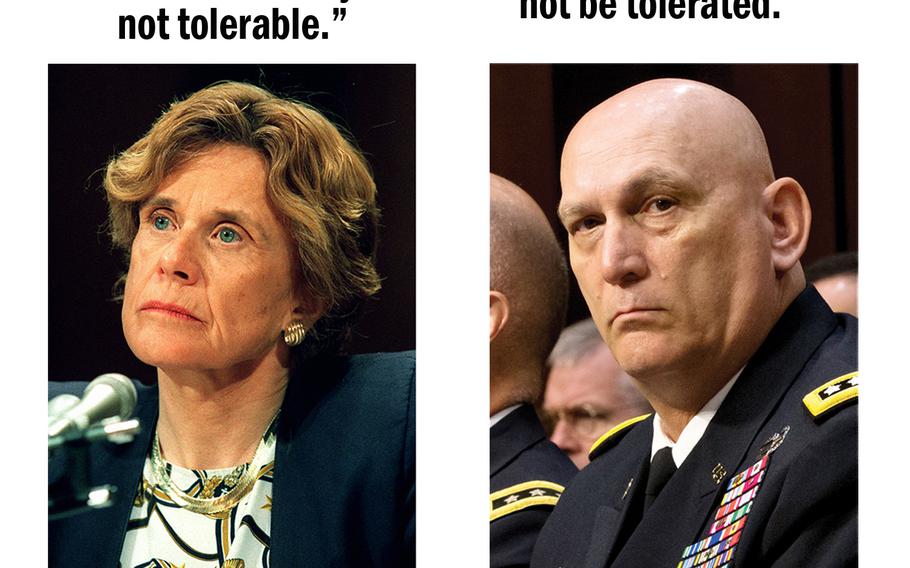 Air Force Secretary Sheila Widnall testifies before Congress in 1997 and Army Chief of Staff Ray Odierno does the same in 2013. ()

The nation’s top military officers told Congress last month that the chain of command was crucial to curbing sexual assault in the services. The message is not a new one; they have been saying the same thing for nearly two decades -- sometimes using remarkably similar language.

“The success of our missions depends in large measure on the degree of trust and understanding that exists among the people in our units,” then Air Force Secretary Sheila Widnall told the Senate Armed Services Committee in 1997 in a hearing on sexual harassment. “Anything that might erode that trust is just not tolerable. We will maintain it, and we will enforce it. We will ensure that our people are treated with the human respect and dignity that they deserve.”

Sixteen years later, Army Chief of Staff Ray Odierno seemed to be reading from the same set of notes.

“Our profession is built on the bedrock of trust — the trust that must inherently exist among soldiers, and between soldiers and their leaders to accomplish their mission,” Odierno said at a June 4 hearing on sexual assault. “These acts … will not be tolerated. This is about inculcating a culture that is in line with our values, specifically treating all with dignity and respect.”

In 1997, Widnall told the senators that commanders were key in ending sexual harassment.

“The most effective way of ensuring accountability in military organizations is to give commanders the direct responsibility …,” she said. “Commanders’ demonstrated leadership and personal commitment … must be visible and unequivocal.”

Odierno agreed in his testimony in June.

“Command authority is the most critical mechanism for ensuring discipline and accountability, cohesion and the integrity of the force,” Odierno told the committee. “It is imperative that we keep the chain of command fully engaged and at the center of any solution.”

Critics say that the current rash of military sexual assaults, following a half-dozen national scandals, shows that the military is unwilling or incapable of dealing with the issue.

“They’re stuck in denial. They still think they can fix things by themselves,” said Rep. Jackie Speier, D-Calif., who has introduced legislation for the past two years to remove sexual assault prosecutions from command purview and give it to a new office of civilian and military experts.

“They shrug it off, as they have for two and a half decades. But the chain of command is the problem. A fallen house doesn’t magically rebuild itself.”

Critics say that after each sexual abuse scandal, military officials have resisted reforms, insisted they knew best how to fix things, then done little, proclaimed victory and waited for public attention to move elsewhere.

“This epidemic has persisted for at least 20 years and probably four decades,” said Nancy Parrish, president of Protect Our Defenders, an advocacy group for military sexual assault victims. “Nothing has changed.”

Until the 1991 Tailhook Convention, there was little public awareness that military women could be at risk from their brothers in arms.

At a reunion of retired and active-duty Navy aviators at a Las Vegas hotel, scores of women were assaulted. Some victims were passed through a hallway gantlet of men who ripped off their clothes and groped them, with the Navy’s top brass doing nothing to stop them.

The initial Navy investigation blamed a few lower-ranking men, and the rear admiral in charge of the investigation said he believed that many female Navy pilots were “go-go dancers, topless dancers or hookers,” according to a Pentagon report.

He was the first of numerous high-ranking Navy officers forced to resign after the Pentagon investigation.

“We get it,” then Acting Navy Secretary Sean O’Keefe said in 1992. “We know that the larger issue is a cultural problem which has allowed demeaning behavior and attitudes towards women to exist within the Navy Department,” O’Keefe said in the Los Angeles Times. “Our senior leadership is totally committed to confronting this problem and demonstrating that sexual harassment will not be tolerated. Those who don’t get the message will be driven from our ranks.”

O’Keefe’s remarks were echoed at the SASC hearing in June.

“The Joint Chiefs and our senior enlisted leaders are committed to correcting this crisis,” said Chairman of the Joint Chiefs of Staff Gen. Martin Dempsey. “We are acting swiftly and deliberately to change a culture that has become too complacent.”

Victims’ advocates have for years called for changes in the way military sexual assault is handled. They have called for allowing victims to sue the services for damages and for changes to the Uniform Code of Military Justice, which gives commanders unfettered discretion in prosecution and sentencing, a situation that they say is rife with conflict of interest and bias. Most victims don’t report their assaults, advocates say, because they don’t trust the chain of command will believe them or hold perpetrators accountable and that they’ll be scapegoated.

The Pentagon estimates that sexual abuse throughout the services increased from 19,000 incidents in 2010 to 26,000 last year, although only a fraction were reported through the chain of command. But the disposition in the case of Air Force fighter pilot Lt. Col. James Wilkerson galvanized a number of senators, all women, to consider making changes to the Uniform Code of Military Justice.

Wilkerson was convicted in November at an Aviano Air Base court-martial of sexually assaulting a sleeping houseguest after an impromptu party.

Three months later, Third Air Force commander Lt. Gen. Craig Franklin overturned the verdict, explaining that it was “incongruent” that a family man like Wilkerson would assault a woman in his own home and that he was perplexed about why the woman had been sleeping there.

As a result of Franklin’s action, Congress is widely expected to pass legislation as part of the National Defense Authorization Act to strip commanders of discretion to overturn guilty verdicts. Such a measure has received the support of Defense Secretary Chuck Hagel and, after initial resistance, the service chiefs.

More sweeping legislation introduced by Sen. Kirsten Gillebrand, D-N.Y., to make military prosecutors the disposition authority in sexual assault cases, removing the chain of command from the process, failed to pass the committee.

Gillibrand vowed to offer her amendment again when the full Senate takes up the defense authorization act.

“I am deeply disappointed the voices of the victims of sexual assault have been drowned out by the military leaders who have failed to combat this crisis,” she said in a statement.

In 2003, six years after Widnall said that sexual abuse would not be tolerated in the Air Force -- that command climate assessments would hold accountable and weed out bad commanders -- the Air Force Academy was beset with accusations that male cadets had been assaulting female cadets.

Air Force Secretary James Roche said the service would “learn about the problem and deal with it ourselves rather than turning to some outsiders who may not understand the culture as well,” the Los Angeles Times reported.

“We still believe this is one of the finest institutions in the world. It stumbled, and now it’s got to get fixed,” Roche said.

A “deep chasm” in leadership, the 2003 report said, had “helped create an environment in which sexual assault became a part of life at the Academy.”

The panel found that sexual assaults had likely occurred and gone unpunished since the academy began admitting women in 1976. “The highest levels of Air Force leadership have known of serious sexual misconduct problems” for at least a decade, the report said, and done little about it.

Female cadets had suffered, the report said, noting that no one had been prosecuted and “sexual offenders may have been commissioned as Air Force officers.”

The academies, which educate a potential select group of future commanders, have continued to struggle with reports of sexual assault and misogyny.

Eighty cases of sexual assault were reported by cadets and midshipmen during the last academic year, up from 65 the previous year, according to a Pentagon report.

The Naval Academy is investigating a report that three members of its football team raped a fellow midshipman at a party as she lay unconscious, passed out from drinking alcohol.

The entire men’s rugby team at the U.S. Military Academy was temporarily disbanded shortly before graduation this year after cadets routinely forwarded emails that a West Point spokesman described as “locker room trash” that degraded women.

At the Senate hearing, the service chiefs said sexual assault had not been the top priority in a decade of war, but that it was now.

They were making progress, they said.

“There is more work to do, much more work, but we are seeing indicators that tell us we are on the right track,” said Gen. James Amos, Marine Corps commandant. “I believe we have momentum on our side.”