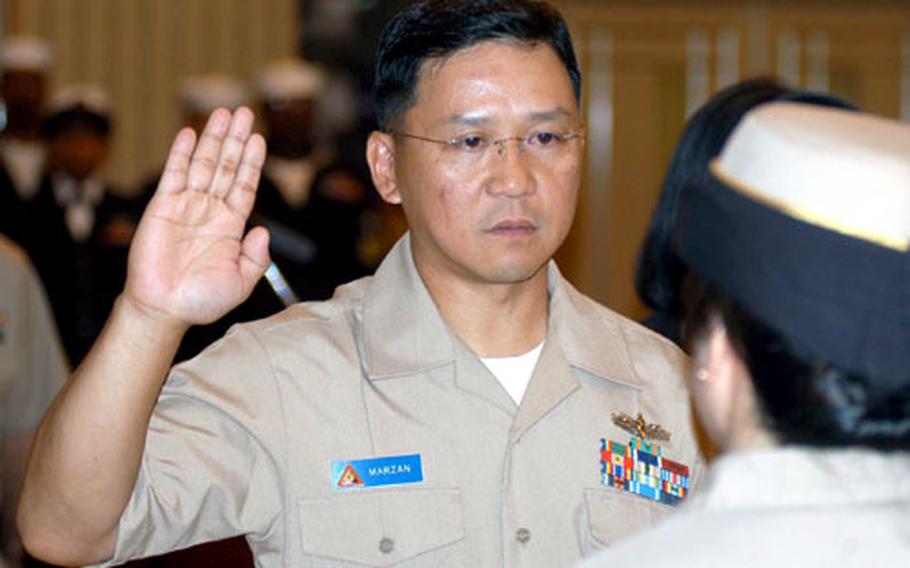 Julius Arturo C. Marzan is sworn in as a chief warrant officer during a commissioning ceremony Wednesday at Misawa Air Base, Japan. Marzan was one of two enlisted supply experts in his category to be selected to the Navy&#39;s chief warrant officer program this year. (Jennifer H. Svan / S&S)

Julius Arturo C. Marzan is sworn in as a chief warrant officer during a commissioning ceremony Wednesday at Misawa Air Base, Japan. Marzan was one of two enlisted supply experts in his category to be selected to the Navy&#39;s chief warrant officer program this year. (Jennifer H. Svan / S&S) 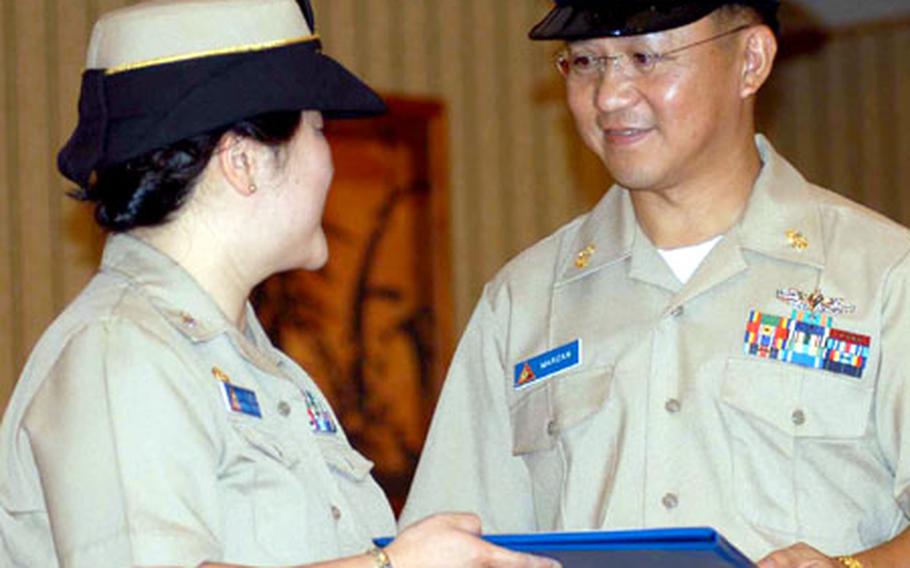 In one day, Marzan realized a dream 19 years in the making, crossing from the enlisted ranks to the officer corps during a commissioning ceremony at Misawa&#8217;s Mutsu Officers Club on Wednesday.

After being sworn in as an officer, Marzan stood at the microphone preparing to give a speech and called his son Andrew to come forward.

According to Misawa Navy officials, Marzan was one of two supply corps warrant officers selected in his specific category for fiscal 2006.

Navy senior enlisted personnel can earn an officer&#8217;s commission as either a chief warrant officer or limited duty officer. Applications are accepted once a year, usually in October. Both programs are highly selective and usually tap into only the top 1 percent of the service&#8217;s enlisted personnel, Navy officials said. This year, according to an official Navy message, &#8220;competition was extraordinarily keen.&#8221; The Navy said those selected had the following common characteristics:

Sustained superior performance in all assignments with consistent top rankings in fitness reports.Steady upward growth and increasingly challenging assignments.Successful service in challenging leadership and technical proficiency positions, such as recruiters, recruit division, commanders and instructors.Continued education and personal and professional development.Good pattern of sea, shore and overseas duty.Marzan, a native of Baguio City, Philippines, indicated persistence was key. He enlisted in the Navy in 1986 under the U.S.-Philippine Bases Agreement Recruitment Program at Subic Bay.

&#8220;The Navy afforded me the opportunity to travel around the world without cost,&#8221; he said.

In addition to numerous stateside assignments, from Brunswick, Maine, to Jacksonville, Fla., Marzan completed two Mediterranean deployments while with the USS Austin, which was permanently based in Norfolk, Va. All the while, he said, his sights were set on becoming an officer. As soon as he was eligible &#8212; the Chief Warrant Officer Program is open to chief petty officers E-7 through E-9 &#8212; Marzan applied.

He wasn&#8217;t accepted on his first try; not the second or third either. He finally made it on his eighth try this year.

As a chief warrant officer, Marzan&#8217;s life is about to change. The former chief petty officer in charge of Personnel Support Activity (PSA) Detachment at Misawa, Marzan will head to supply corps officer school in Athens, Ga., in December for five months. He&#8217;ll then most likely be assigned to a ship where he&#8217;ll live and eat with officers.

Chiefs &#8220;are technical experts just like my chiefs are but they lead divisions,&#8221; said Command Master Chief Bob Chenier, command master chief of PSA-Pacific. &#8220;They are junior officers with the same expertise as a chief.&#8221;

Marzan said he is ready for the next challenge. Officers have &#8220;more responsibility and accountability,&#8221; he said.