After 16 months, Stryker brigade getting ready to head back to Alaska 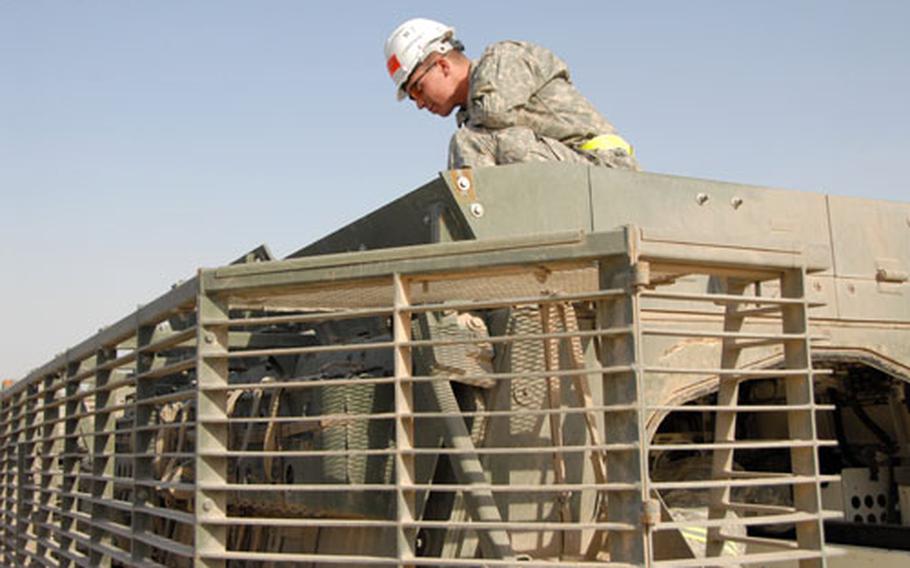 Spc. Harry Drum performs the early stages of the cleaning process for the Strykers. Before the slat armor around the Stryker is taken off, soldiers search for stray ammunition or anything else that might have fallen in the cracks during deployment. Among lots of trash, the soldiers have found knives, watches and iPods. (Megan McCloskey / S&S)

Spc. Harry Drum performs the early stages of the cleaning process for the Strykers. Before the slat armor around the Stryker is taken off, soldiers search for stray ammunition or anything else that might have fallen in the cracks during deployment. Among lots of trash, the soldiers have found knives, watches and iPods. (Megan McCloskey / S&S) 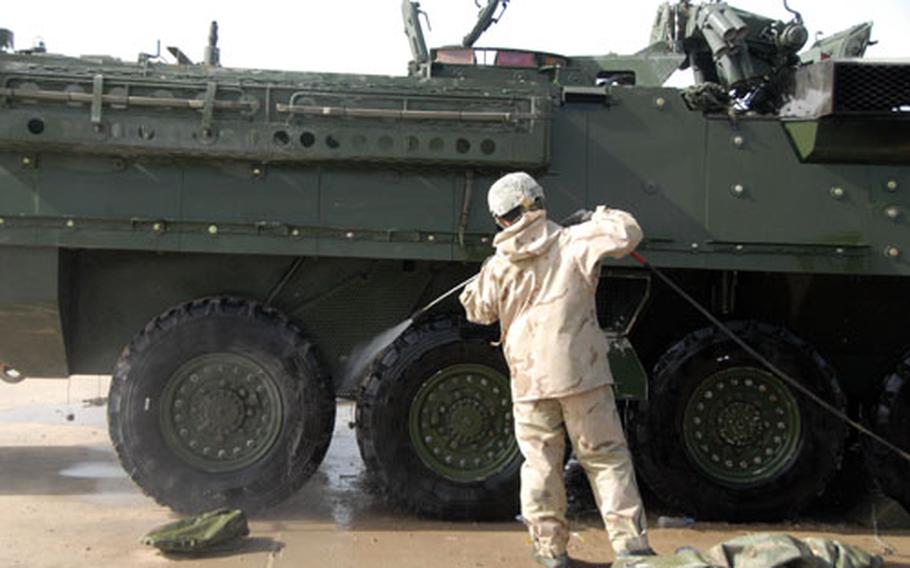 Pvt. Jordan Skinner, 20, of Cinncinati, washes one of 172nd Stryker Brigade&#39;s more than 200 Stryker vehicles Sunday afternoon. After a four-month extension of their Iraq tour in August, the brigade is heading home to Fort Wainwright, Alaska. Skinner and other soldiers are in the middle of a more than weeklong process of cleaning the vehicles before they are shipped back to Alaska. (Megan McCloskey / S&S) 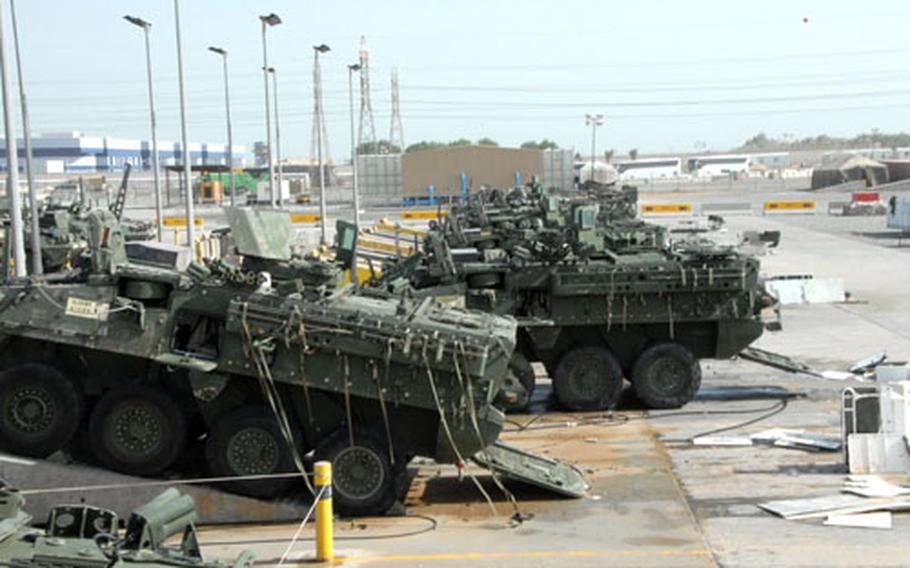 Some 172nd Strykers wait to be washed before going through customs and onto a ship back to Alaska. The vehicles have to be clean enough to pass a "pinch test," meaning a customs agent can&#39;t pinch any dirt between his fingers during inspection. (Megan McCloskey / S&S)

CAMP ARIFJAN, Kuwait &#8212; After 16 months in the scorching heat of the desert, a couple of hundred Stryker vehicles are now winterized for the deep freeze of Alaska.

The unit out of Fort Wainwright, Alaska, was in Iraq for four months longer than expected after a controversial extension of its one-year deployment. A victim of its own success in the northern part of the country, the brigade was tapped in late July to help quell the virulent sectarian fighting in Baghdad.

More than 350 soldiers from the 172nd were already home in Alaska when the extension happened &#8212; just a few days after President Bush and Iraqi Prime Minister Nouri al-Maliki announced a joint operation named Together Forward.

Most of those soldiers had to return to Iraq. The families of soldiers who never left Iraq took down welcome home signs and postponed life plans, including weddings, according to a letter to Army headquarters from Col. Robert Ball, brigade deputy commander.

In Iraq, the extension brought shock and disappointment. Soldiers said morale was low for about a week, with folks in the unit grumbling about not being able to go home.

Many soldiers were just days away from leaving Iraq, with some, like Staff Sgt. Brian James, going on to vacations. James, 23, planned to trade the sand of Iraq for the beach of Mexico.

But spirits started to pick up when a sense of pride kicked in at the realization that they had been handpicked to augment the 4th Infantry Division in Baghdad because of the 172nd&#8217;s success in Mosul and Rawaha.

The unit absorbed the news of the extension and bounced back better than Spc. Harry Drum said he thought it would.

&#8220;I like to think it pisses them off,&#8221; a smiling Drum said about 4th ID&#8217;s reaction as he worked Sunday at Camp Arifjan to get the Strykers prepared for shipping back to Alaska.

Much of the same work the brigade had done up north &#8212; securing neighborhoods and working closely with the Iraqi army and police force &#8212; was needed in Baghdad, said Maj. Mark Collins, a battalion executive officer in Iraq.

Gaining the trust and respect of the Iraqis was essential for the mission, said Collins, 42, of Phoenix.

The brigade lost 26 soldiers during the deployment and more than 300 were wounded. Seven soldiers were killed after the extension, some of whom had been home in Alaska and had redeployed to Iraq.

While the 172nd soldiers were refocusing on a new mission in Iraq after the extension, there were more pragmatic concerns for the families in Alaska.

The average winter temperature in Fairbanks, Alaska, near Fort Wainwright, is about minus 12 degrees, and temperatures of 30 to 40 below zero aren&#8217;t unusual.

Many of the families had sold the gear essential to surviving the winter at the spring sale on base in anticipation of moving in August, Maj. Mark Collins said.

To ease the burden of purchasing new gear, the Army has set up a reimbursement program for those and other expenses associated with the extension, possibly including the cost of missed flights.

Fort Wainwright also provided other services for the 172nd families, such as free, extended day care, counselors and bowling nights.