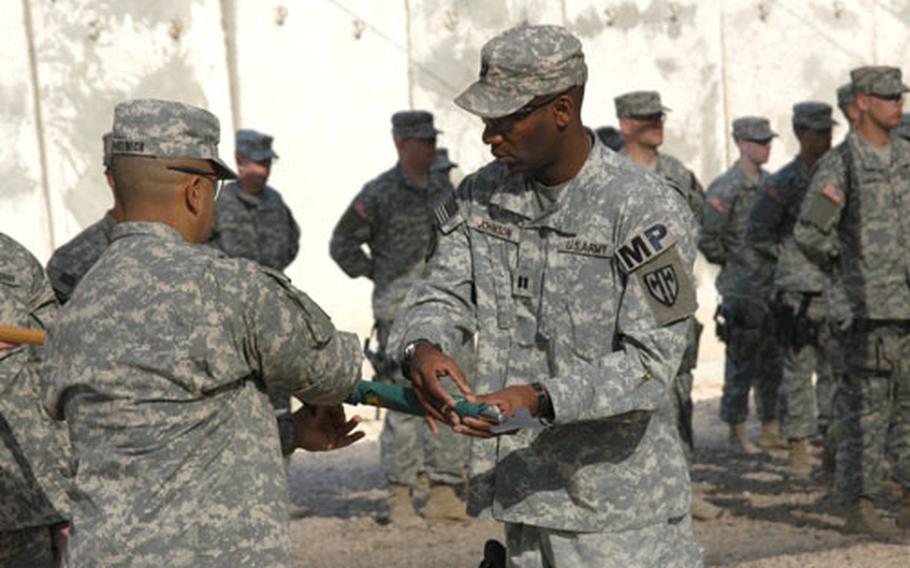 First Sgt. Ramon Domenech, 46, left, of Puerto Rico, and Capt. Darren Johnson, 37, of Tuscaloosa, Ala., case the 127th Military Police Company&#39;s guidon Saturday during a transfer of authority ceremony at Forward Operating Base, Kalsu, Iraq. Johnson is the company commander, while Domenech serves as its first sergeant. (Vince Little / S&S)

The unit ceded authority to the Kaiserslautern-based 230th Military Police Company, also known as &#8220;The Warmasters,&#8221; in a ceremony Saturday.

The 230th, which arrived earlier this month, takes over a share of responsibility for the streets and Iraqi police stations of Babil province, a sprawling area about 50 miles south of Baghdad.

Farrar, 20, of Redlands, Calif., was driving the lead truck in a convoy on May 11 in Iskandariyah when a bomb went off near his vehicle. Horner, 43, of Newport News, Va., was killed June 1 in Baghdad by small-arms fire.

Murchison, 21, of Independence, Mo., died on Aug. 4 in Baghdad when a makeshift bomb tore through his vehicle.

&#8220;You have shed blood and spilled blood in your effort to partner with the Iraqi police so that the country of Iraq can become a nation,&#8221; said Lt. Col. Frank Rangel, the 720th Military Police Battalion commander.