After 15 months in Iraq, servicemembers face an arduous process of returning to ‘normal’ Spc. Shane Byrne and his wife, Amanda, listen to a class for married couples with spouses who just returned from Iraq. Shane Byrne recently returned to Vilseck, Germany, after a 15-month deployment in Iraq. (Photos by Heath Druzin/S&S)

Spc. Shane Byrne and his wife, Amanda, listen to a class for married couples with spouses who just returned from Iraq. Shane Byrne recently returned to Vilseck, Germany, after a 15-month deployment in Iraq. (Photos by Heath Druzin/S&S) 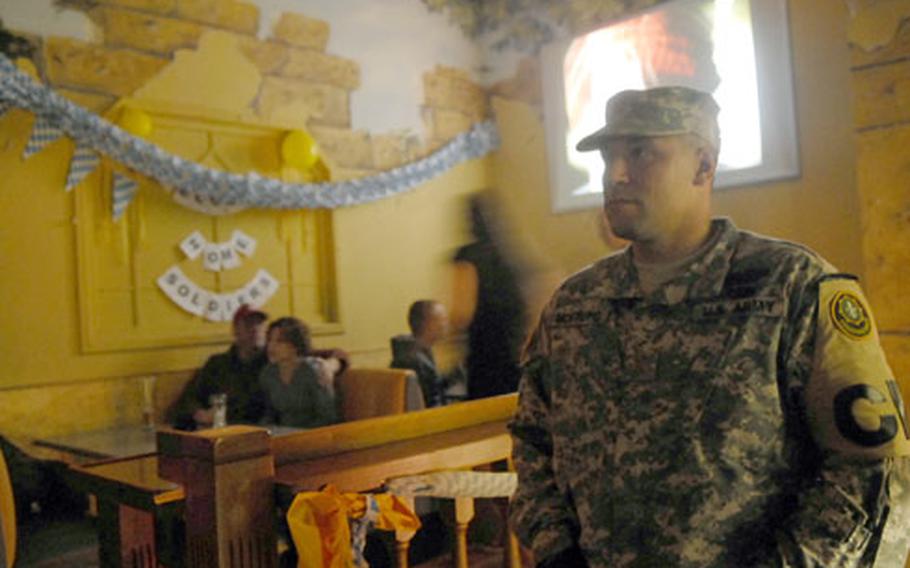 Second Lt. Chris Montoyo keeps watch at a bar in Vilseck, Germany, during a "courtesy patrol" aimed at making sure soldiers recently back from Iraq stay out of trouble. ()

ALI AL SALEM AIR BASE, Kuwait &#8212; It was midnight and home was within grasp, but after 15 months of grueling battle and fleeting sleep, the soldiers of 2nd Stryker Cavalry Regiment now faced the airport screening from hell.

After carefully packing their bulging bags with clothes, body armor and trinkets picked up in Iraq, 305 soldiers had to empty everything for security officials who picked through shirts, underwear and socks looking for contraband. The check came between two X-ray scans and two metal detectors, a process that took about three hours.

Graffiti on the wall of the screening room summed up the grumbling of many of the bleary-eyed troops.

Staff Sgt. Douglas Reynolds mulled over what he saw as a contradiction.

"People coming from India to the United States can get into the country easier than this," he said with a resigned smile.

This group of Stryker soldiers, along with most others from the regiment, are now back at their home base in Vilseck, Germany. But, as with most soldiers coming home from war, it took an arduous journey to get there.

The soldiers began their trip home at Forward Operating Base Normandy, the dusty outpost in Diyala province where many 2nd Stryker soldiers spent the last months of their tour.

There, they waited for hours next to a darkened airfield, as first sandstorms, then lightning and torrential rain forced flight after flight to be canceled. In an area gripped by a disastrous drought, the timing of the downpour was uncanny.

After two days waiting out the weather outdoors in a leaky tent, the soldiers finally got out on a pre-dawn helicopter ride to Balad, Iraq, where they stayed overnight before hopping onto a quick C-17 flight to Kuwait. Between nerves and constant movement, some soldiers hadn&#8217;t slept for two days by the time they arrived at Ali Al Salem Air Base in the wee hours of the morning.

There they stayed for a day, wobbling with bloodshot eyes to fast food joints, a luxurious respite after months of droopy chow hall fare at Normandy. Finally they were close to getting home, but not before their final ordeal that began more than 12 hours before their last flight.

The night before the flight, they loaded their gear onto a semi-truck trailer, then hopped on a bus to the security screening. There were briefings and hours of waiting in between before an 1&#189;-hour bus ride to Kuwait City&#8217;s international airport to catch a morning flight after yet another sleepless night.

"This is worse than being (in Iraq) for 15 months," Sgt. 1st Class Shawn Hodges quipped.

Six days after their first attempt to leave Normandy, the soldiers made it back to Vilseck, greeted by pandemonium at the base gym as family members mobbed the weary troops.

Once back, there was still more to do before getting a break.

After 15 months of an ascetic, tightly controlled existence in Iraq, the temptations of free-wheeling Europe can be difficult to resist, but when the soldiers returned there were strict rules to which they must adhere or risk punishment. For the first eight days back they were limited to three alcoholic drinks per day and could not venture outside a 50-mile radius of their base. Curfew was midnight.

It falls on the leaders to enforce these rules, and writing up a soldier for a misstep after a 15-month deployment is something no officer relishes. A violation of these rules can mean loss of precious leave time.

"I would go down to the bar and carry you on my shoulders myself, rather than give you an Article 15, and I mean that," Lt. Col. Rod Coffey told soldiers from 2nd Stryker&#8217;s 3rd Squadron.

At night, Stryker officers patrolled the bars and clubs of Vilseck and nearby Grafenw&#246;hr, making sure soldiers stayed in control and offering occasional rides home to those who have had a few too many. As 2nd Lt. Chris Montoyo strolled into a Vilseck bar as part of a recent patrol, heads turned and whispers filled the room.

Montoyo said he doesn&#8217;t mind the whispers, as long as it reminds his soldiers of the rules.

During the first eight days, known as the "reintegration period," soldiers must also attend classes intended to alert them to the sometimes difficult adjustments they must make when coming back from war.

The classes deal with issues scores of soldiers face, such as post traumatic stress disorder and marital problems, but many 2nd Squadron troops attending a morning class a day after their return seem to have their minds elsewhere.

During a break in a class for married couples, Spc. Shane Byrne said he and his wife Amanda appreciate the counseling but would have liked more of a break.