After 12 years, POW/MIA bracelet is returned to family 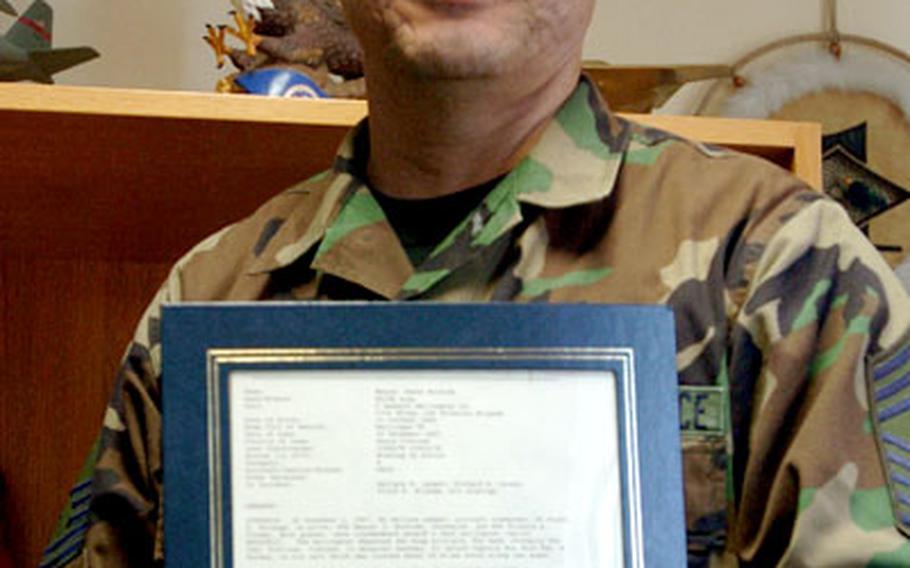 For 12 years, Rodriguez wore a stainless steel bracelet engraved with Moreida&#8217;s name, rank and the date he went missing in Vietnam. On Dec. 2, 1967, the helicopter Moreida was flying in did not return from a mission.

Rodriguez, a mission systems flight superintendent with the 52nd Communications Squadron at Spangdahlem Air Base, wore it every day until he learned Moreida&#8217;s remains were identified and buried three years ago.

Rodriguez, who joined the Air Force 25 years ago, bought the bracelet from a base exchange concession stand in England as a way to pay tribute to American servicemembers missing in action. He asked the vendor for &#8220;an enlisted person from Texas&#8221; just like him and got Moreida&#8217;s.

Rodriguez didn&#8217;t learn until February, though, when he checked a Web site noting that Moreida had been found.

He then wrote Moreida&#8217;s niece, Edith, and told her that he had her uncle&#8217;s bracelet. She was listed on a Web site for families searching for bracelets of their loved ones.

The 36-year-old from Austin, Texas, was ecstatic and couldn&#8217;t wait to tell her father and the rest of the family.

Rodriguez, a self-proclaimed history buff who likes tradition, would learn more about the name he saw daily on his wrist.

Manuel Jesus Moreida was his full name, but buddies called him Jesse or Chuey, according to his niece.

He was supposed to be stationed in Germany in the late 1960s, but switched with his brother to go to Vietnam. They swapped assignments because they figured Manuel Jesus would be at a lower risk because he was a mechanic and his brother was with an airborne unit.

Moreida volunteered for his last mission, helping return a Korean captain to his unit, his niece said. Three weeks before he was scheduled to return home, his helicopter crashed into the side of a mountain in a densely wooded area. The Army declared him and the others on board dead 11 years later.

On the day Moreida died, three men dressed in Army uniforms came to his parents&#8217; house at 5 a.m. to tell them what happened. His brother had to translate for his parents, who spoke little English.

Without the remains, it gave the family some hope.

His father died in 1991 believing his son was still alive. His mother always wondered but hinted that she felt her son was gone.

&#8220;If we had known he had died, we could grieve and go on, but the not knowing, wondering if he was a [prisoner of war] was difficult for every member of our family,&#8221; Edith Moreida wrote.

The Army notified the family that Moreida&#8217;s remains were identified on the day his mother died.

About seven years ago, his niece had put her name down on the registry of families looking for bracelets. She plans to give the bracelet worn by Rodriguez to her father, who has a flag from his brother&#8217;s funeral in a shadow box at his home, she wrote in the e-mail.

Rodriguez said it was an honor to wear the bracelet but not having it on anymore makes his wrist feel &#8220;naked.&#8221; When he wore it, a lot of people asked about it, especially younger airmen.

That&#8217;s one of the reasons he plans to get another bracelet. He will have plenty of names to choose from. There are still 1,827 Americans still missing or unaccounted for from the Vietnam War, according to the National League of Families of American Prisoners and Missing in Southeast Asia.

Hundreds of families of servicemembers who are, or were, missing in action are looking for POW/MIA bracelets with their loved one&#8217;s name on it.

A Web site helps people with the bracelets exchange them with family members.

The site &#8212; thewall-usa.com/ &#8212; has a registry of more than 1,100 family members looking for POW/MIA bracelets. It also has an equally long list of bracelet owners searching for families of the missing servicemembers. Bracelet owners and seekers can add their name to the registry and post their e-mail address.

Vietnam veterans of the 4th Battalion, 9th Infantry Regiment created the site in 1996.

The Web site says it is the first Internet site &#8220;dedicated to honoring those who died in the Vietnam War.&#8221; In addition to the bracelet exchange, every servicemember who is on the Vietnam Veterans Memorial in Washington is listed. There also is a search function for those who want to find a name on the wall and its location.

Americans began wearing the POW/MIA bracelets in the early 1970s to remember those being held in captivity or those missing in action in Vietnam. They continue to be popular and various companies sell them.