After 12 long months in the desert, soldiers just 'glad to be home’ 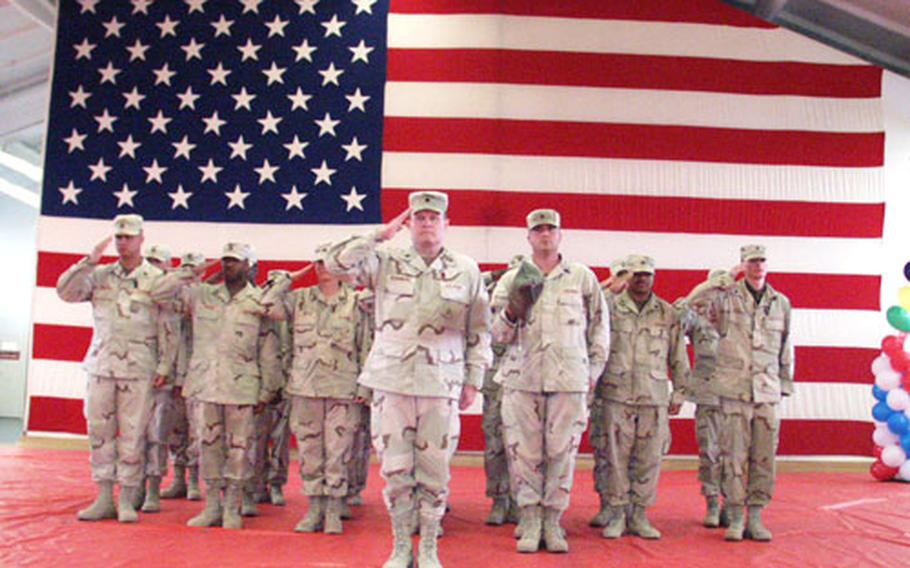 KAISERSLAUTERN, Germany &#8212; After a year in Afghanistan, soldiers of the 39th Transportation Battalion didn&#8217;t want to hear a long speech or a droning recap of their deployment.

They just wanted to embrace their loved ones.

So when their commander, Lt. Col. Randy Rosenberg stepped to the microphone on Tuesday, he delivered one of the shortest speeches in the history of the Army.

With that command, the homecoming inside the Kleber Casern gymnasium began.

Soldiers standing in front of a two-story-tall American flag broke from formation and rushed to waiting spouses, children and friends. Members of the 39th spent a year at Bagram Air Base, the main operating base in Afghanistan, helping move troops and cargo to forward operating bases spread across the country.

Reuniting with his wife was sweet relief for Spc. Erik Parsons, 22. The deployment went a lot smoother than he thought it would, but it was difficult being away from his soul mate.

The 39th is one of the first units to complete a 12-month rotation into Afghanistan. Previous units did six- and nine-month deployments.

Capt. Randall Newman, 35, commander of the battalion&#8217;s 618th Movement Control Team, greeted his three daughters and his wife. His group worked out of the base&#8217;s air terminal. He said coming home felt almost like a dream.

He said one of the biggest challenges of the deployment was getting cargo from Pakistan to Afghanistan and dealing with Afghanistan&#8217;s cool, wet winters and hot, dusty summers.

The 39th helped support operations leading up to the country&#8217;s presidential elections in October. Nobody got seriously injured during the deployment.