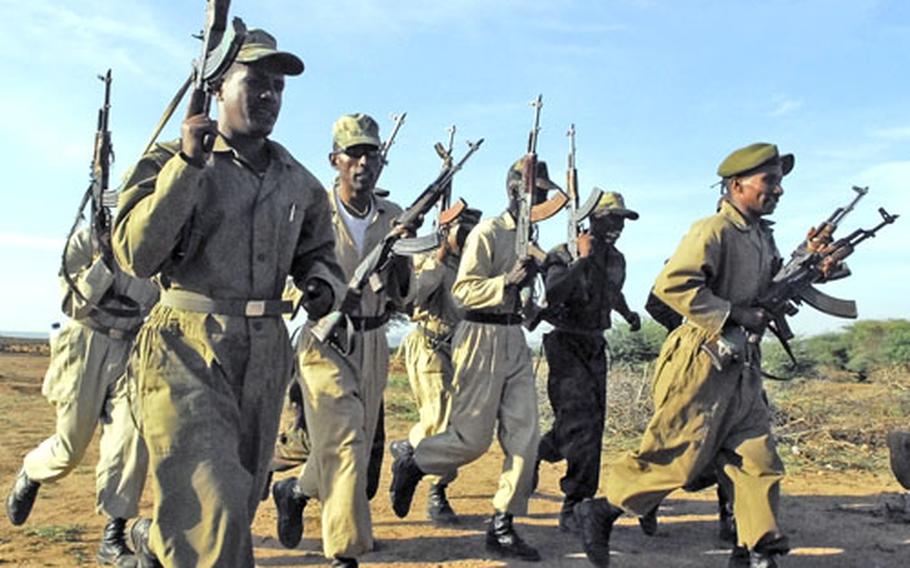 Ethiopian soldiers chant and pump their Kalashnikov rifles following a day of training in the field with U.S. military instructors in December. Defense Secretary Robert Gates said Tuesday the Pentagon will set up a new command, to be known as Africa Command, to oversee its operations there. (Monte Morin / S&S)

U.S. and African troops train together, medics treat sick people and engineers dig wells for fresh water. But while trying to win friends and influence people, the threat of terrorism also is being targeted by the military and its latest endeavor, the establishment of an African Command.

&#8220;The groups we are most worried about &#8230; are the ones who have the ability to influence nations, plural,&#8221; said Rear Adm. Richard K. Gallagher, director of the U.S. European Command&#8217;s Plans and Operations Center.

Groups like the Salafist Group for Preaching and Combat, or GSPC, Gallagher said, has sworn allegiance to al-Qaida and wishes to create an Islamist state in Algeria and across northern Africa, much like the Islamic caliphate of centuries past.

The GSPC is thought to have kidnapped 32 European hostages in the Saharan desert in 2003, and held them for months demanding a multimillion-dollar ransom.

Another group, the Armed Islamic Group, or GIA, killed thousands of civilians in Algeria in the 1990s.

The groups might be small for now, Gallagher said, but can be deadly.

&#8220;These are not local groups that are unhappy with the local situation in a particular country,&#8221; Gallagher said. &#8220;When I&#8217;m talking about transnational characters, these are groups that freely flow their people across the spectrum.&#8221;

The terrorism climate in the northern half of Africa, which is highly Muslim, is different from that in pre-9/11 Afghanistan, according to Nick Pratt, a retired Marine colonel who worked for the CIA, and who teaches about terrorism at the George C. Marshall European Center for Security Studies in Garmisch, Germany.

Factors that make Africa ripe for terrorist activity, Gallagher said, include huge, ungoverned spaces where people can roam freely, and large numbers of restless young people who are vulnerable to anti-Western propaganda.

The fight against terrorist organizations will be a long one, Gallagher said. The military, he said, is trying to make African nations more able to crack down on transnational extremists.