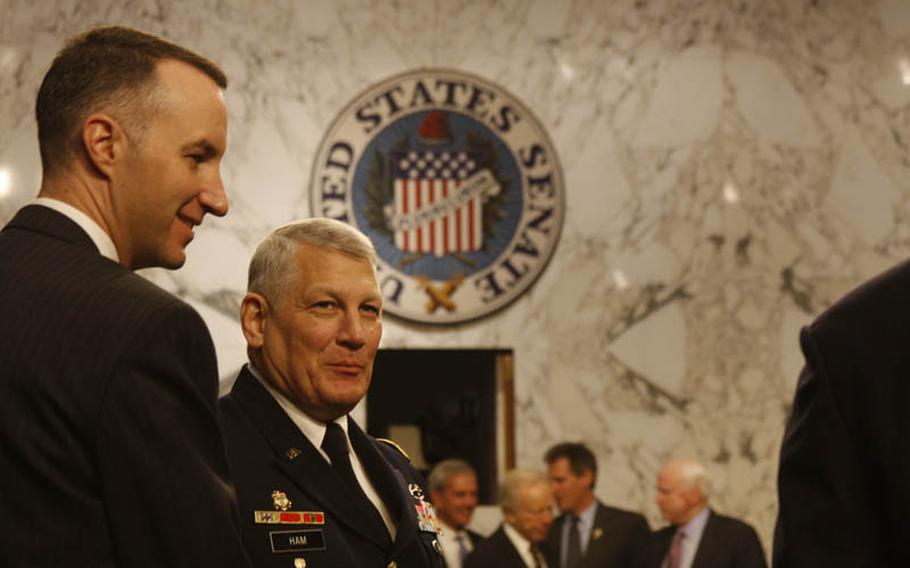 WASHINGTON &mdash; The incoming head of U.S. Africa Command called the reported relationship between terrorist groups al-Qaida and al-Shabab a serious national security threat for America and the top priority for the command in the near future.

Army Gen. Carter Ham, who currently serves as commander of U.S. Army Europe, told senators at his confirmation hearing on Thursday that the extent of the relationship between the groups is unclear, but the claim by al-Shabab leadership &ldquo;signals the type of terrorist activity they want to engage in.&rdquo;

The militant Islamist group, based in Somalia, has generally been confined to regional attacks, but this summer claimed responsibility for bombings in Uganda, which killed more than 70 people. AFRICOM officials have been working for years to help support Somalia&rsquo;s fragile Transitional Federal Government and their fight against the group.

Ham called their wider area of attack &ldquo;a disturbing interest&rdquo; for the broader international community, and promised to direct more resources to research and counter the threat.

&ldquo;This reminds us that the war on terrorism is a worldwide war,&rdquo; said Sen. Joe Lieberman, I-Conn. &ldquo;This will be a test of whether we can contain them before these areas become something like Afghanistan before 2001,&rdquo; a staging ground for attacks against America.

But lawmakers also questioned whether the military has allotted enough personnel and funding to the 2-year-old command. Sen. James Inhofe, R-Okla., said current officials have done &ldquo;an incredible job with limited, and I would say inadequate, resources.&rdquo;

Ham would replace Gen. William &ldquo;Kip&rdquo; Ward, who was appointed AFRICOM&rsquo;s first commander when the command stood up in October of 2008.

Currently the command includes a staff of about 1,500 personnel, about half of whom are civilians. Ham said, if confirmed, he would report back to Congress quickly on the command&rsquo;s budget and personnel, to see what changes or additions are needed.

He also said he will review where the command should be based, with an eye towards possibly moving out of its current headquarters in Stuttgart, Germany. Ham said locations in Europe, Africa and the United States would be considered.

Ham is expected to be confirmed to the post in coming weeks. All military nominations have been on hold since last month, but on Tuesday, Sen. Jim Webb, D-Va., said he would lift his block on the confirmations after the Defense Department this week provided him with overdue data related to the closing of Joint Forces Command.