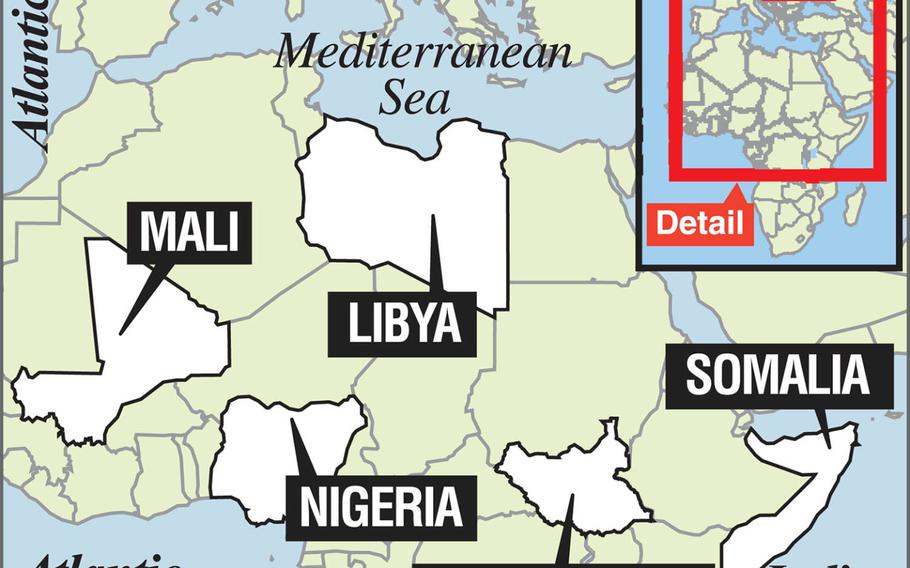 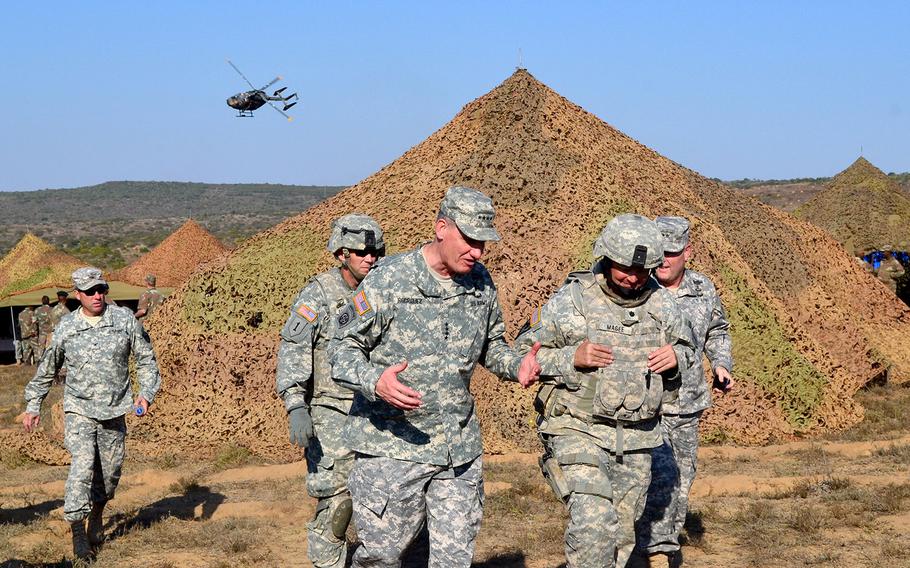 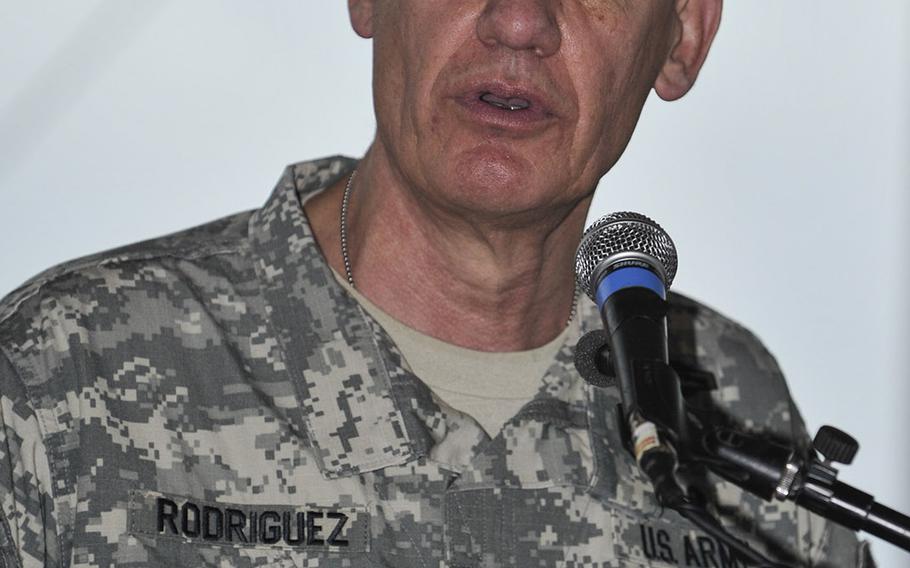 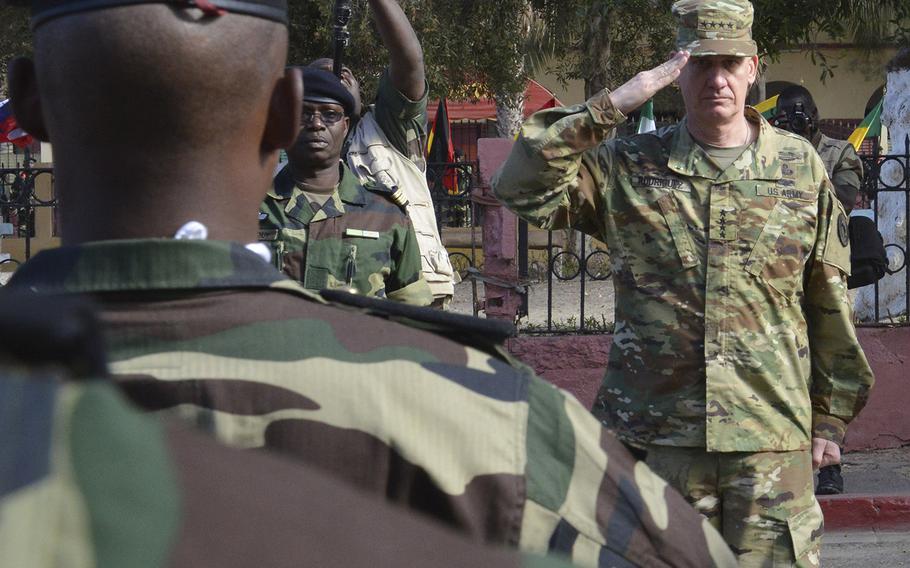 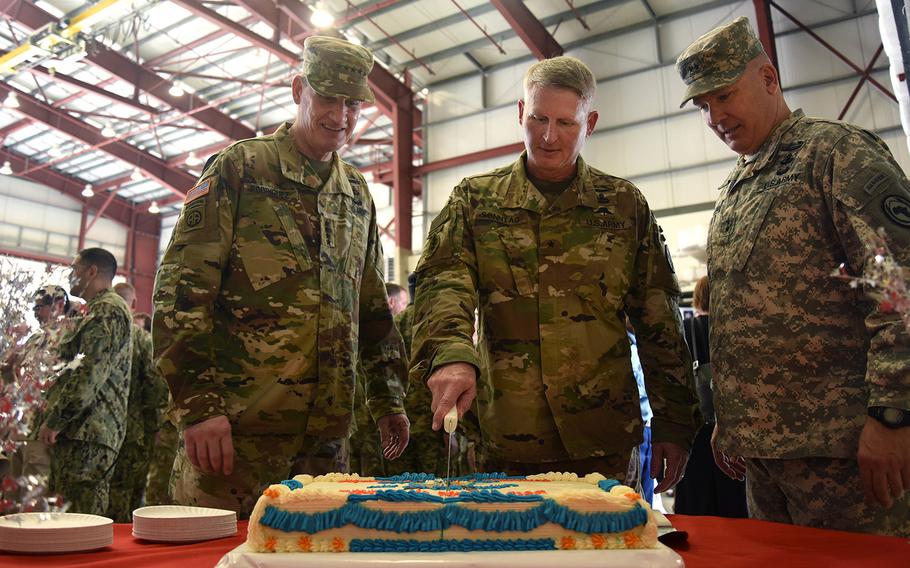 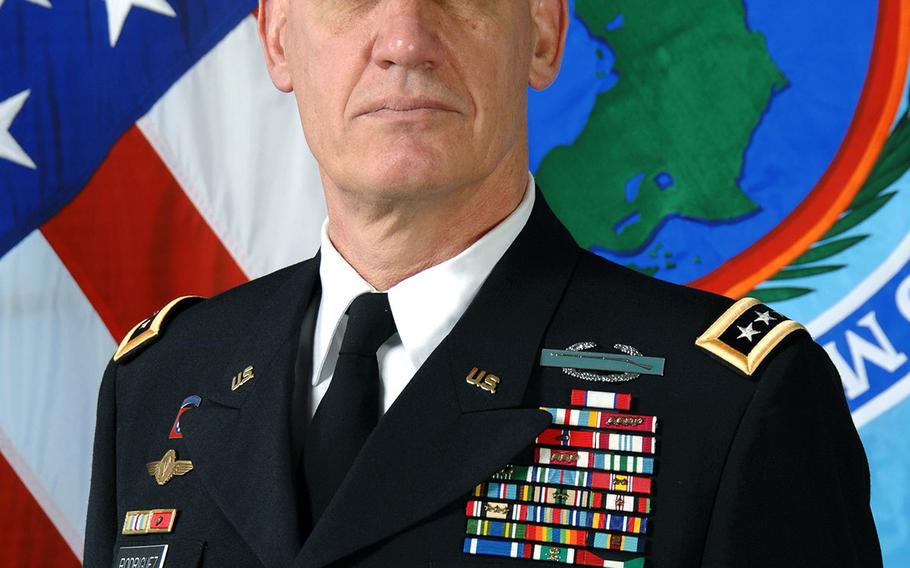 STUTTGART, Germany — In the early days of U.S. Africa Command, airstrikes against militants in Somalia were guarded secrets, the kind of operations at odds with an image that AFRICOM was a kinder, gentler version of its sister combatant commands.

Today, the Pentagon issues press releases when enemy targets are taken out in Somalia or Libya.

For AFRICOM’s spotlight-averse commander, U.S. Army Gen. David Rodriguez, the emerging image of AFRICOM as a hard-charging hunter-killer force is a source of frustration, and one he says is at odds with reality.

Unilateral strikes are “a very tiny sliver” of what AFRICOM does, which is building up local forces so they can take fight their own battles at home. But the U.S. strikes against insurgents “colors your perception that this is a combatant command that is doing a lot of kinetic activities,” he said during an exit interview at his Stuttgart headquarters.

“We have been taking the precise strikes in Somalia for the whole time AFRICOM’s been here,” he said, playing down their significance.

This summer, Rodriguez will hand over leadership to Marine Lt. Gen. Thomas D. Waldhauser, a combat-tested commander who, if confirmed, must confront a tangle of security problems in Africa.

While Rodriguez stopped short of saying the military should be more secretive about certain operations, his ambivalence about the command’s new-found attention underlines one of the challenges AFRICOM’s new commander will face: balancing a need for lethal, attention-grabbing U.S. strikes on enemies with the long-term grind of building indigenous forces to do the bulk of the dirty work.

More than carrying out airstrikes, Rodriguez said, the command devotes most of its energy on its roughly 430 annual “theater security cooperation” activities, which range from large-scale multinational exercises to smaller, unit-level training missions across the continent.

“The operations (air strikes) that we do that everybody focuses on is really temporary fixes and buying the time to get them to get their capacities built up so they can do that themselves,” Rodriguez said.

He points to the growing share of African troops taking part in U.N. peacekeeping missions as a sign that training efforts are making a difference. A decade ago, Africans represented about 25 percent of U.N. peacekeeping forces in Africa, compared with nearly 50 percent today, he said.

Still, the U.S. must confront the threats in Africa and AFRICOM has had to adapt to effectively meet those challenges.

Waldhauser will arrive as AFRICOM faces an arc of instability spanning from Somalia in the east to Libya in the north, where Islamic State fighters are trying to gain a stronger foothold. In Nigeria, Boko Haram continues to pose a regional threat, carrying out large-scale attacks on civilians and threatening the government of Africa’s largest country.

In between are scores of other fragile states, such as Mali, which in 2012 was nearly overrun by Islamic militants.

“There are other places that could go south quickly,” Rodriguez said. “They are fragile countries to begin with, so when things go wrong they could go quickly wrong.”

What is the next Mali? Maybe South Sudan, Rodriguez said. “You’ve got to watch those things very closely.”

Established in 2007, AFRICOM was initially conceived as a different sort of combatant command, heavy on feel-good training missions and humanitarian projects and light on combat operations. That changed in 2011, when AFRICOM commanded the first wave of strikes in Libya to support rebels seeking to overthrow Moammar Gadhafi.

The Sept. 11, 2012, terrorist attack on a U.S. diplomatic compound in that country, which killed Ambassador Christopher Stevens and three other Americans, revealed a gap in AFRICOM’s crisis-response capabilities.

Since then, the command has worked to sharpen its focus on threats from groups such as al-Shabab in Somalia and now the Islamic State in Libya. In a sign of the Pentagon’s increased focus on the region, Rodriguez recently received approval for more surveillance over Libya. On Thursday, Gen. Joseph Dunford, chairman of the joint chiefs of staff, said U.S. military advisors could be sent to Libya at the request of the U.N.-backed government, The Washington Post reported.

In the interview, Rodriguez said raids by special operations units or airstrikes remain the exception rather than the rule. But AFRICOM has evolved as security conditions have changed.

During his tenure, Rodriguez has helped establish a network of small staging bases, bare-bones facilities designed to help AFRICOM surge forces when needed in a crisis. Drone bases also have popped up in places such as Cameroon, helping AFRICOM to get a better eye on the region.

Now, the key for AFRICOM will be better coordinating intelligence gathered from the air with personnel on the ground, Rodriguez said.

“You’ve got to remember that (drone surveillance) is just a soda straw,” he said. “You don’t understand feelings. It’s got to be a broader array of intelligence to really have a good situational understanding.”

Closer coordination with local forces on the ground, who have the best grasp of the human terrain, will be key, he said.

“Bringing all that stuff together is the wave of the future and the way that we will get the best situational understanding,” he said.

Rodriguez, a 6-foot-5-inch former paratrooper perhaps best known for being the key architect of the military’s 2010 surge in Afghanistan, will soon head off to retirement in northern Virginia. The plan: Rest a couple months and “see what comes next.”

Before he goes, he will hand off leadership of AFRICOM at a change-of-command ceremony that will be full of military pomp. For Rodriguez, that means stepping into the spotlight, a place he’s generally tried to avoid during his 40-year military career.

While many four-star leaders relish the spotlight, Rodriguez, has long kept a low profile, reluctantly granting interviews and preferring the company of soldiers to the public glare.

When asked why, Rodriguez chuckled.

“I think that the job, the jobs I’ve had, they’ve challenged me,” he said with a little smile. “So I have focused a lot of energy on that, and I think that is where you should put your focus. I just tried to do that the best I could.”