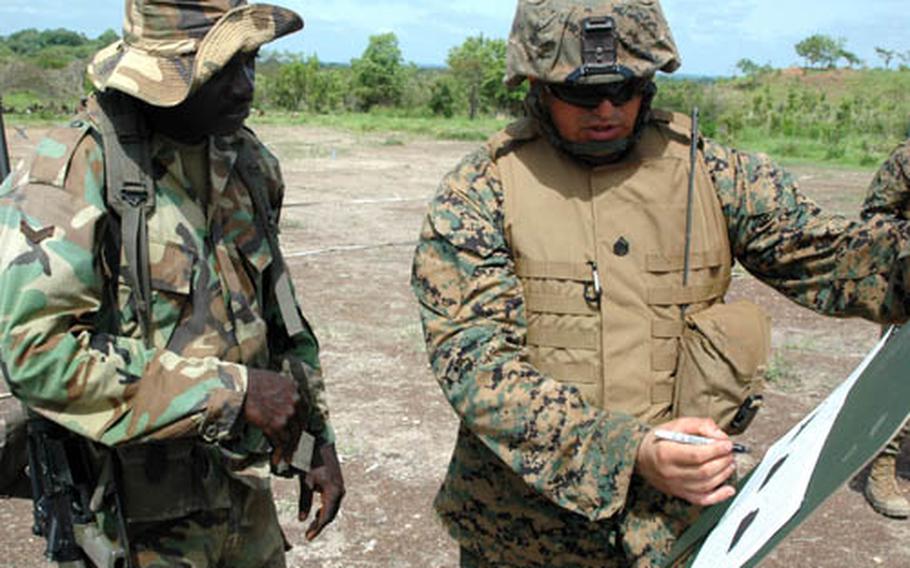 DABOYA, Ghana: Marine Staff Sergeant Andres E. Garza, right, reviews a marksmanship target with Lance Corporal Mensah Evans, a Ghanaian infantry soldier in Tomale, Ghana, during exercise Shared Accord in June. The House Appropriations defense subcommittee is recommending that $80.6 million be spent on Africa Command in the next fiscal year, instead of the $389 million that the Pentagon requested. (Donald E. Preston/U.S. Marine Corps)

Just weeks away from standing up as the Defense Department&#8217;s newest combatant command, Africa Command is facing a serious budget shortfall.

For fiscal 2009, President Bush had requested $389 million for AFRICOM, which is expected to become fully operational on Oct. 1 at its Stuttgart, Germany, headquarters. But last week, the House Appropriations Subcommittee on defense recommended providing only $80.6 million in funding &#8212; 80 percent less than was requested, according to Matthew Mazonkey, communications director for Rep. John Murtha, D-Pa., the subcommittee chairman.

"The subcommittee has provided $80.6 million to allow AFRICOM to continue to operate at current levels for another year," Mazonkey wrote in an e-mail to Stars and Stripes.

The subcommittee gave Secretary of Defense Robert Gates 90 days to report on how the command can be "overhauled to create an organization better equipped to meet the full-range of challenges facing Africa," Mazonkey said. It also called on the Pentagon to address AFRICOM&#8217;s current presence in Africa and to discuss plans on a permanent location of the command on the continent.

Attempts to reach Africa Command officials on Saturday were unsuccessful. In a July 30 report from Murtha&#8217;s office, the subcommittee suggested slashing the budget because of the lack of a suitable location for the command&#8217;s headquarters.

n $5 million for ongoing joint training exercises in the Horn of Africa.

According to InsideDefense, a trade publication covering the Pentagon, the subcommittee&#8217;s report questions the role the new command will play on the continent.

"The committee believes that traditional U.S. military operations are not an appropriate response to most or many of the challenges facing Africa, which include: ending armed conflict, calming political unrest, consolidating democratic achievements, fighting terrorism, expanding economic growth, and preventing the spread of HIV/AIDS and caring for its victims," the report states, according to InsideDefense.