AFRICOM expo attracts businesses eager to get in on the development 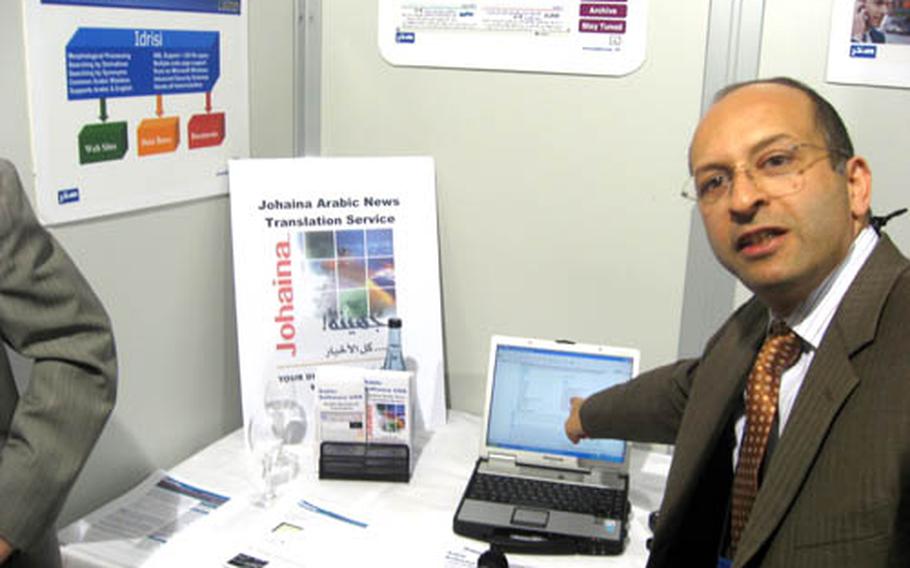 Rami Safadi, chief technical officer for Sakhr Software USA, gestures to his laptop computer where words he has spoken in Arabic have been translated into English on the computer screen and audibly through speakers. Safadi was one of the vendors on Wednesday attending the AFRICOM/Business Transformation Agency expo in Stuttgart, Germany. (Charlie Coon / S&S)

So was Michael Levett of Citizens Development Corps.

The Citizens Development Corps was one of about 80 businesses pitching away Wednesday at the AFRICOM/Business Transformation Agency exposition at the SI Centrum complex. All were hoping to do business with U.S. Africa Command and other agencies once the new military command gets up to full speed.

The Stuttgart-based AFRICOM plans to be receptive to the potential partners, according to Brig. Gen. Michael A. Snodgrass, the command&#8217;s chief of staff.

&#8220;If you have a proposal where you think you can do something better than the government, then we encourage you to bring forward a proposal,&#8221; Snodgrass told the exhibitors.

After hearing a three-hour presentation about the new command, attendees migrated from a theater to the expo hall where 83 booths were set up.

But the expo was not the time nor place to pursue big-money military contracts.

Businesses have been knocking at AFRICOM&#8217;s door since the command was announced in February 2007, but the command has been deliberate in its buildup. When AFRICOM initially stood up on Oct. 1, it had hoped to have nearly 500 staffers on board, but instead had only 183. The staff has since grown to about 550 on its way to a final target of 1,300.

To date, only 24 of 182 missions have been transferred to AFRICOM from the European, Central and Pacific commands, which split U.S. military responsibilities on the continent. As the command slowly took shape, the capitalists were made to wait at the gate.

Ed Atchley of Aspen Water Inc. said he already does business with the Ugandan and Burundian militaries on behalf of the State Department.

&#8220;We can provide low-energy, low-cost water purification systems throughout Africa,&#8221; said Atchley, who confided that he had set up a Friday meeting with AFRICOM staff to discuss his product line.

Then Atchley eyed a Lockheed-Martin booth across the aisle.