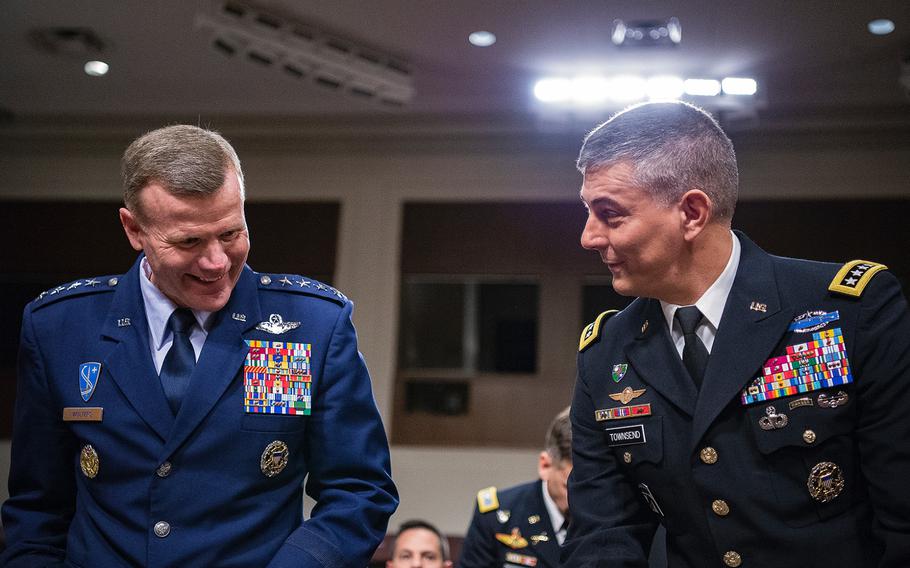 Buy Photo
Gen. Tod D. Wolters, left, and Gen. Stephen J. Townsend share a laugh as they prepare to testify Tuesday, April 2, 2019, during a Senate Armed Services Committee hearing on Capitol Hill in Washington. Wolters has been nominated to head the European Command and Townsend to head the Africa Command. (Carlos Bongioanni/Stars and Stripes)

Buy Photo
Gen. Tod D. Wolters, left, and Gen. Stephen J. Townsend share a laugh as they prepare to testify Tuesday, April 2, 2019, during a Senate Armed Services Committee hearing on Capitol Hill in Washington. Wolters has been nominated to head the European Command and Townsend to head the Africa Command. (Carlos Bongioanni/Stars and Stripes) 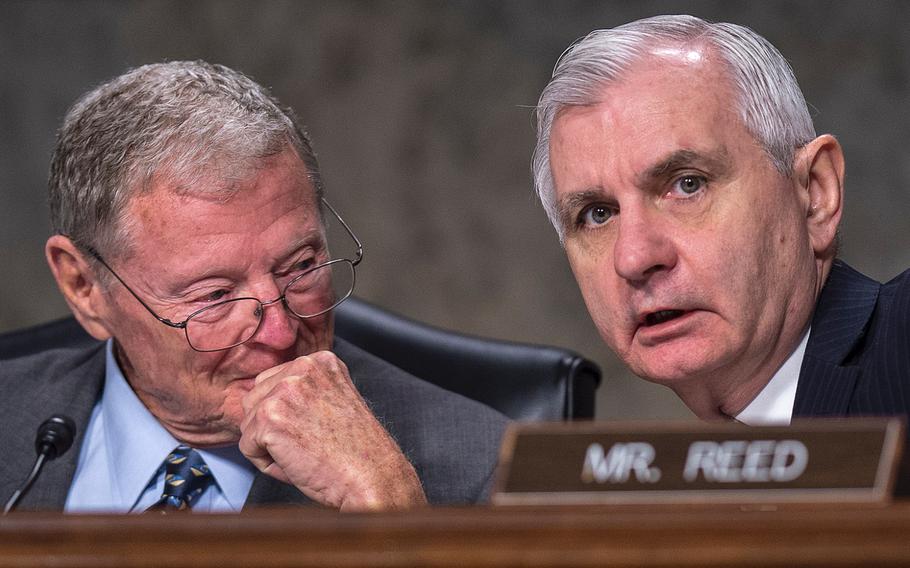 The nominee to serve as the next head of U.S. European Command said Tuesday he wants more troops on the continent as well as two additional Navy destroyers in the theater and an upgraded logistics network to speed forces east in the event of a conflict with Russia.

Another top priority will be to continue improving infrastructure in Eastern Europe, such as rail lines, to “ensure we can close on the enemy at a faster pace,” Gen. Tod Wolters said during Senate testimony.

If confirmed by the Senate, Wolters, who leads the Air Force in Europe and Africa, would replace retiring Gen. Curtis M. Scaparrotti in the dual role of EUCOM boss and NATO supreme allied commander in Europe. Wolters testified alongside Gen. Stephen J. Townsend, who is nominated to serve as the next U.S. Africa Command chief.

Both generals, whose prospective headquarters will be in Stuttgart, Germany, highlighted Russia as a top concern, along with China. While China has been active in Africa for years, Russia also is expanding efforts with military advisers operating in places like the Central African Republic.

“I think (the Russians) are after access and influence to our detriment,” said Townsend, who currently serves as the head of the U.S. Army Training and Doctrine Command.

Russia’s main motives are “exploitative,” Townsend said, with a focus on mineral extraction and arms sales.

In the case of China, lawmakers expressed concern about its first overseas base in Djibouti, a small East African country where the U.S. also has its main military hub. Sen. James Inhofe, R-Okla., the chairman of the Senate Armed Services Committee, said he was worried China was involved in secretive underground work at its base. “You have to wonder what they are up to in Djibouti,” Inhofe said.

“I don’t know what is beneath their base, but I will make it a point to find out,” Townsend said in response.

The challenge for AFRICOM will be to balance efforts to counter Russia’s and China’s growing influence with a need to remain focused on counterterrorism efforts, Townsend said.

The military is in the process of scaling back the overall size of its special operations force in Africa, but pressure must continue to be applied, he said.

“We can’t let off the gas on these violent extremists,” Townsend said.

In Somalia, the U.S. steadily has intensified military operations, including airstrikes against militants there. When asked whether the U.S. involvement meant it was at war in Somalia, Townsend said no.

“Make no mistake, we are at war in Somalia,” said Warren, who called for a new strategy in the country.

Meanwhile, Wolters said he had concerns beyond just Russia in Europe.

China has stepped up its investments in ports across the continent and Beijing has its eye on investing in an airfield in Greenland.

“This gives us great pause,” Wolters said. “We must remain concerned.”

Wolters concurred with Scaparrotti’s position that if NATO ally Turkey moves forward with a Russian missile defense system, it should not be allowed to acquire U.S. F-35s.

Wolters said the two additional destroyers, which would join naval assets in Spain, Italy and elsewhere in the theater, would help the Navy cover more area at a time when Russia has increased its operations, particularly in the Mediterranean Sea.

While Wolters said the U.S. military advantage in Europe had eroded, an increase in spending is beginning to reverse that trend.

If EUCOM’s plan to enhance combat readiness continues, Wolters said it will have regained much of its advantage over Russia by the mid-2020s.

“We will be in a place we are comfortable with,” he said.