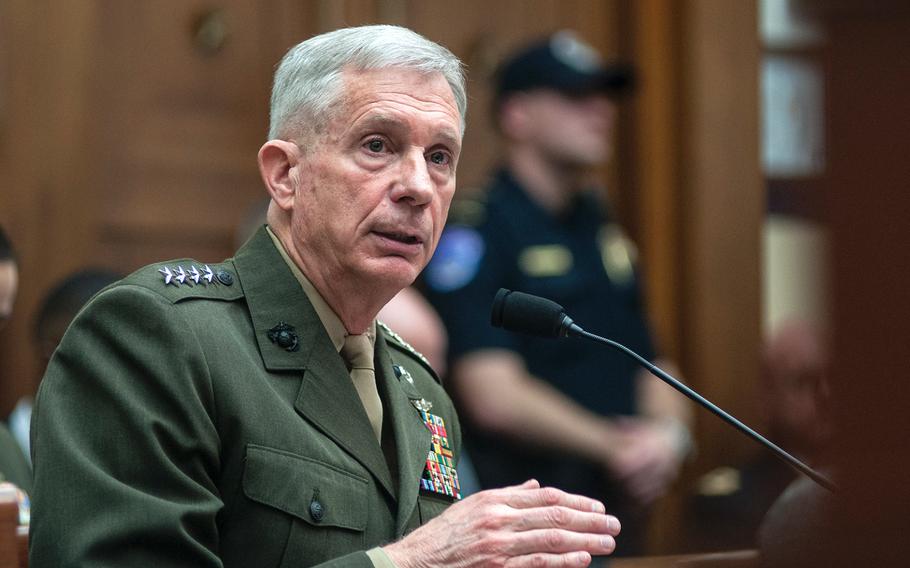 Buy Photo
Gen. Thomas Waldhauser, commander of the U.S. Africa Command, testifies before the House Committee on Armed Services during a hearing Tuesday, March 6, 2018, on Capitol Hill in Washington, D.C. Waldhauser told lawmakers that he predicts China will expand beyond Djibouti, where it now operates just “outside our gate.” (Carlos Bongioanni/Stars and Stripes)

The top general overseeing U.S. operations in Africa said Tuesday that he expects China’s military to build more bases on the continent as it seeks to extend its influence.

Gen. Thomas Waldhauser predicted Tuesday that China will expand beyond Djibouti, where it now operates just “outside our gate.”

“Djibouti happens to be the first. There will be more,” Waldhauser told members of the House Armed Services Committee.

For more than a decade, China has been a major presence in Africa, funding massive public works projects in places such as the Democratic Republic of Congo while also investing in mineral extraction and other business ventures.

In Djibouti, China operates a naval base, but concerns have emerged that Beijing also seeks to take control of Djibouti’s commercial port. Last month, Djibouti cancelled a contract with a Dubai firm that now runs the facility. During testimony Tuesday, lawmakers said the concern is Djibouti might “gift” the port to the Chinese.

Waldhauser said the United States has received assurances from Djibouti that this is not the case. However, the general acknowledged China has influence and a degree of leverage as it pours millions of dollars into public works projects, such as building a new soccer stadium and a shopping mall.

“If the Chinese took over that port, the concern could be significant if there are restrictions on our ability to use it,” Waldhauser said.

The United States has a 30-year lease to conduct operations at Camp Lemonnier in Djibouti, which borders Somalia and serves as a logistics launching pad for eastern Africa.

AFRICOM’s strategy in Africa is now taking a larger accounting of China as “the strategic environment becomes more crowded and competitive,” Waldhauser said.

“We will never outspend the Chinese on the continent,” he said.

However, one method of gaining influence in the region is through humanitarian and development efforts, the general added.