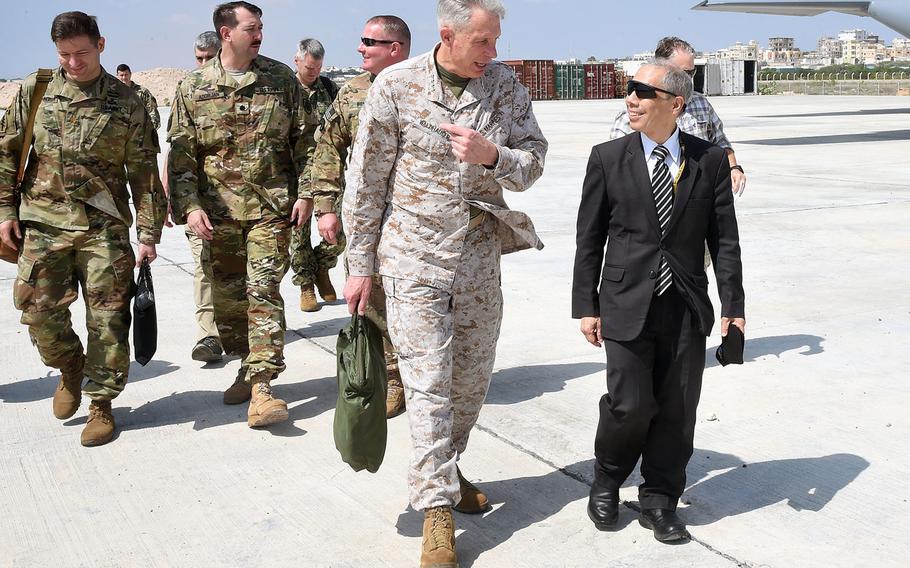 STUTTGART, Germany — America’s top commander for Africa made a rare visit to war-torn Somalia, meeting with local leaders to discuss security in a country where U.S. forces quietly serve in a fight against militants.

A decade ago, such high-level talks inside Somalia involving top American officials were virtually unthinkable. U.S. military operations in the country were still a closely guarded secret and diplomatic efforts were minimal, given the widespread chaos in the country and the lack of a central government.

However, Somalia has emerged as AFRICOM’s main effort during the past three years as the military carries out regular airstrikes against Islamic militants in the country. U.S. special operations troops also serve on the front lines as advisers to government forces.

“AFRICOM and the Department of State are working as part of a substantial international security assistance effort in support of our Somali partners,” Waldhauser said in a statement.

The anticipated departure in 2020 of a multinational African force, which has led the decadelong battle in Somalia against the insurgent Al-Shabab group, has added a sense of urgency to the American mission. The U.S. campaign in Somalia is part of a push to ready government forces to lead the fight once the African Union ends its deployment.

Waldhauser, whose last public visit to Somalia was in May 2017, met with President Mohamed Abdullahi Mohamed, who is a dual U.S. citizen, and Somali defense officials, AFRICOM said.

In Somalia, government corruption is widespread and clan rivalries have long confounded attempts to impose order. But while the nation routinely ranks as one of the most corrupt on earth, Waldhauser said the government has been making “measurable progress and it’s clear they are dedicated to reaching the goal of a safe, stable and prosperous Somalia.”

In Africa, the U.S. will be reducing its force by 10 percent during the next three years as the military focuses more on countering Russia and China. However, the mission in Somalia will remain unchanged, the Pentagon said earlier this month.