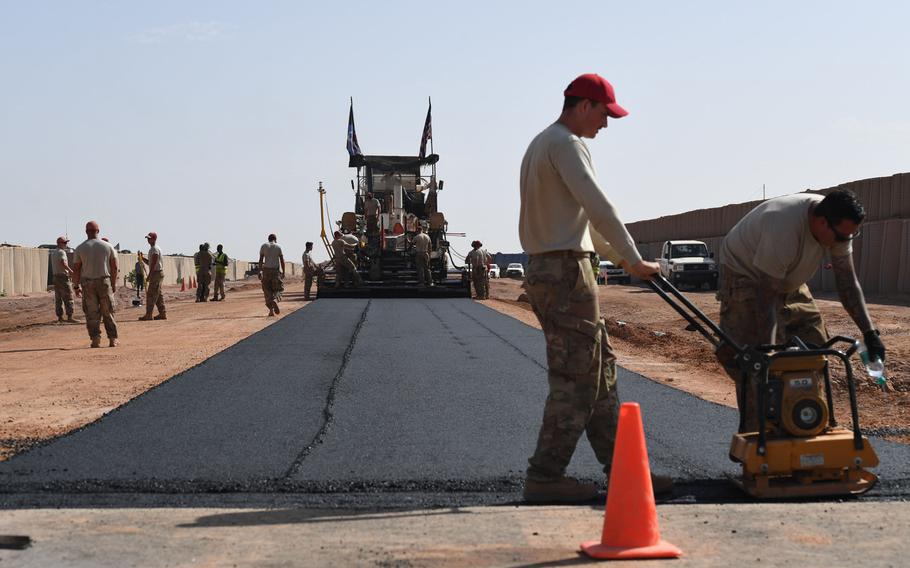 Airmen prepare a flight line test strip on Air Base 201 in Agadez, Niger, Oct. 19, 2018. The Pentagon's Inspector General said in a report Thursday said that the military mismanaged the construction of the base and may have violated the law. (Rachelle Coleman/U.S. Air Force)

Airmen prepare a flight line test strip on Air Base 201 in Agadez, Niger, Oct. 19, 2018. The Pentagon's Inspector General said in a report Thursday said that the military mismanaged the construction of the base and may have violated the law. (Rachelle Coleman/U.S. Air Force) 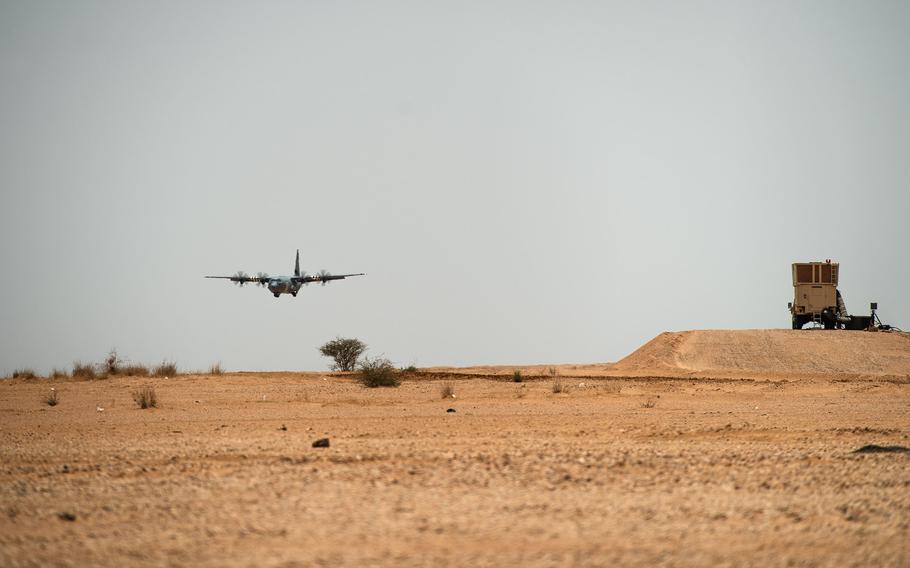 A U.S. Air Force C-130J Super Hercules lands at Air Base 201, Agadez, Niger, Aug. 3, 2019. The Pentagon?s Inspector General said in a report issued Thursday that the military ineffectively planned, designed and built the $100 million base, and may have broken the law while doing so. (Devin Boyer/U.S. Air Force)

STUTTGART, Germany — The U.S. military may have broken the law when it mismanaged funds and ineffectively planned the construction of a $100 million drone base in Niger, the Pentagon’s Inspector General said in a report issued Thursday.

Now, the IG is calling upon the Pentagon and Air Force to launch a formal probe into how the project was handled and determine if laws and regulations were broken.

Last year, U.S. Africa Command began operating out of Air Base 201 in Agadez after years of delays due to construction problems.

The IG said the reason for the delays was that the military “did not effectively plan, design, and construct” the base and went outside the bounds of what Congress had approved for the site when it excluded runway shoulders in the project scope.

“Additionally, the Air Force bypassed congressional notification when it split the construction requirement for intelligence, surveillance, and reconnaissance operations into six operations and maintenance projects totaling $5.4 million,” the IG said.

The Air Force, which was in charge of the project, also potentially violated the Antideficiency Act when it acquired 12 permanent guard towers using procurement funds instead of military construction funds, the IG said. Moreover, the Air Force did not construct Air Base 201 infrastructure to meet Defense Department safety requirements, the report said.

AFRICOM on Thursday rejected the IG's allegations that laws were potentially violated.

"A few procedural missteps occurred in an effort to build a functional air base in a very remote area under very austere conditions," AFRICOM spokesman Col. Chris Karns said in a statement. "There was absolutely no malicious intent, minor missteps occurred in what was a herculean effort that is foundational to helping Niger counter a growing terrorist threat in the region."

Karns said procedures for such projects will be tightened up going forward.

The base in Agadez had been in the works for years but ran into repeated delays. During the construction project, the military blamed the desert work environment’s austerity as one of the complicating factors. The Air Force also noted in the past that the project was the largest construction effort in the service’s history, costing upward of $100 million.

But while bad weather was a reason cited by the military for a nearly three-year delay in opening the base, the IG said the main issue was a failure of oversight, planning and design.

The leadership at AFRICOM and U.S. Air Forces Africa both disagreed with the IG’s findings, saying that the construction effort was completed in an operationally challenging environment.