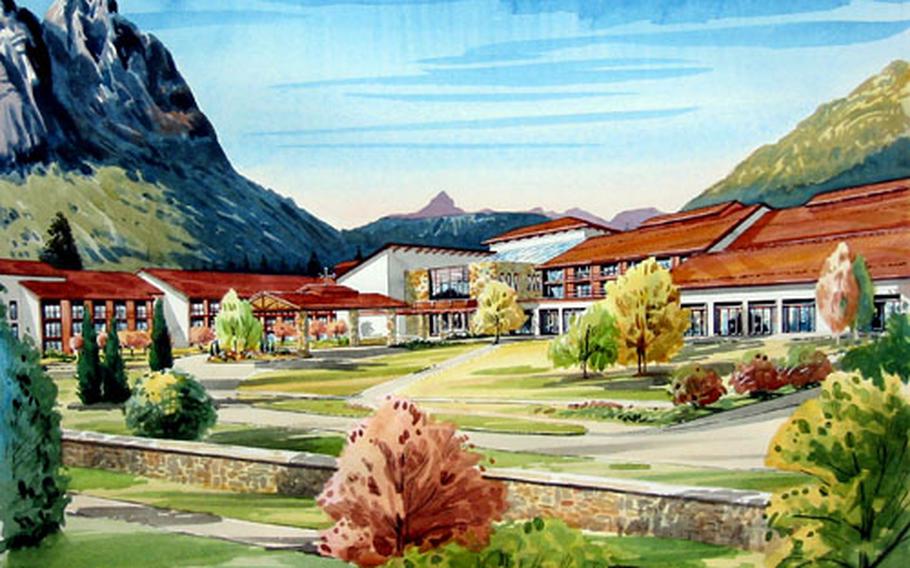 An artist’s rendering of the Edelweiss Lodge and Resort to be built by the Armed Forces Recreation Center in Garmisch, Germany. (Photo courtesy of AFRC)

HEIDELBERG, Germany &#8212; The new Armed Forces Recreation Center resort hotel in Garmisch will be named after a small white flower commonly found in the Alps.

Brig. Gen. Robert L. Decker, commander of the Community and Family Support Center, announced the name of the Edelweiss Lodge and Resort on Tuesday at the Morale, Welfare and Recreation Expo here.

The Army also released an artist&#8217;s rendering of what the resort will look like upon completion in the fall of 2004. The resort will have 330 guest rooms, a full-service conference facility, pool and wellness center and three restaurants with Alpine views.

For centuries, edelweiss has been a symbol of prestige for Austria, Switzerland and Germany. Since 1878, the high-altitude grown perennial has been a protected species in the Alps.

The flower entered popular culture when, in the film &#8220;The Sound of Music,&#8221; actor Christopher Plummer sang to the von Trapp children about the flower that represented the Austrian homeland.

Many Europeans living in the Alps still wear the flower or its likeness on their clothing as a soldier might wear a medal of honor.

Also, the flower is revered for its medicinal healing abilities, symbolizing the role the resort plays in providing rest and relaxation to servicemembers and their families, according to AFRC officials.