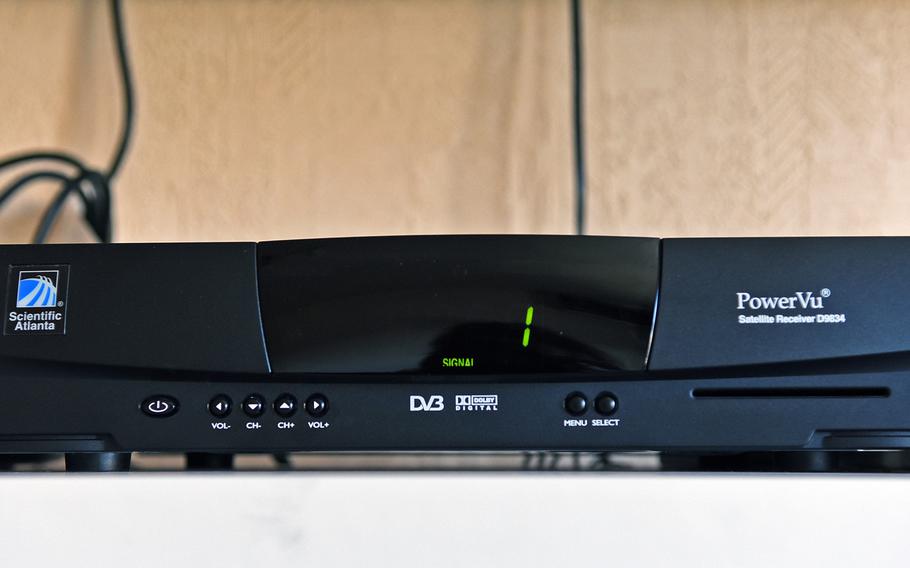 This Scientific Atlanta decoder is one of the older AFN receivers that will have to be replaced when AFN upgrades its broadcast signal to a digital format. Off-base residents with old decoders will have to purchase or lease a new one in order to continue watching AFN after the network switches to high-definition television, slated to begin in late summer and early fall. ()

KAISERSLAUTERN, Germany — After years of delay, American Forces Network is poised to go completely digital, a change that will require thousands of off-base AFN viewers to purchase new decoders to keep the service.

The American Forces Radio and Television Service, AFN’s parent organization, plans to convert all of AFN’s programming to high definition by the end of the year, said Col. Dave Honchul, AFRTS director.

“We’re fulfilling the promise that we made,” he said. “We’ve been hearing from the viewers and we’ve been working this for a while.”

The switch to high definition was originally planned for fiscal 2012, but full conversion was delayed by budget constraints, contracting problems and other issues.

In anticipation of the conversion, many overseas viewers purchased a more expensive HD decoder — the Cisco D9865.

The Cisco decoder at the Exchange on Ramstein Air Base can be purchased for $369 or leased for $18 a month. The new devices are expected to be at least $100 less than the current decoders, Honchul said.

About two-thirds of the 70,000 AFN decoders in use are the Cisco D9865 and are HD compatible; when AFN upgrades its satellite signal, those decoders will still work with some setting changes, Honchul said. But an estimated 20,000 older decoders are still in use, and those will have to be replaced or “you will not get anything,” once the signal is upgraded, he said.

The new decoders are in the contracting and production phase and will be available for purchase online and at Exchange stores in the coming months.

“Our goal is to make sure that the decoders have been out and available for at least a month or two before we start forcing the switch,” Honchul said.

The upgrade involves switching the network’s broadcast signal to a digital format that can transmit high-definition audio and video, improving the picture and sound quality of AFN’s current eight-channel lineup.

The conversion will be implemented in phases, tentatively slated to begin in early August in the Pacific region for Navy ships using AFN’s Direct-to-Sailor service. AFN at sea still won’t be high-definition, but the picture quality, which currently is below standard-definition, will be better, Honchul said.

The signal to ships in Europe will be converted next along with contingency sites downrange, followed by the off-base Direct-to-Home and on-base service in Europe, then the Pacific. The conversion should be complete by the end of the year, Honchul said.

“It has taken a lot longer than any of us ever anticipated,” he said. “We acknowledge we’ve been saying this for a while. I’m just happy that ... that we are going to go high-def.”

The switch to high definition was originally planned for fiscal 2012. But after AFN launched an HD sports channel in 2011, full conversion to digital was delayed by budget constraints, contracting problems and other issues.

The new decoder will have some added features, including a Digital Video Recorder that will enable viewers to record television programs, as well as a better viewing guide.

For those just moving into off-base housing, Honchul suggested leasing or borrowing a decoder until the new ones are available.

The new encoding contract costs about $5.3 million. It encodes the signal from the AFN Broadcast Center in California out to the regions, protecting it from piracy.

Still undetermined is which installations overseas will be able to broadcast AFN in high definition. If a base cable provider is not able to show the programming in HD, it will still be able to provide AFN in standard definition, Honchul said.

AFN viewers can get more information about the transition to high definition at myafn.net; a 24-hour call center will also be stood up later this year to support the effort.