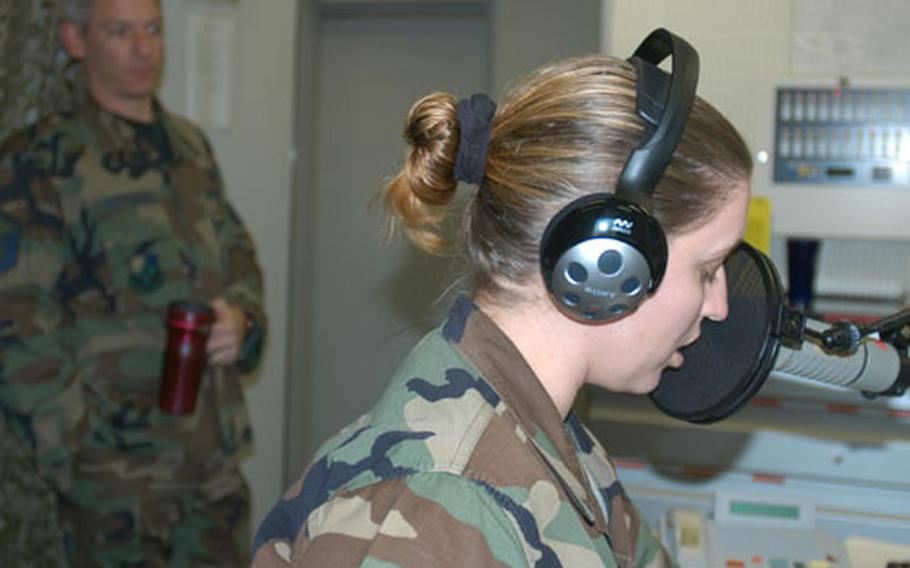 There is a trade-off, however: Disc jockeys will play callers&#8217; favorite music &#8212; as long as the lyrics meet common decency standards &#8212; but they&#8217;re also dishing out command information every time they pick up the mike.

It&#8217;s called Readiness Radio, a unique radio format that comes to life when the 35th Fighter Wing conducts its quarterly exercises or in the event of a real-life crisis.

&#8220;The intent is to deliver targeted command information to the wing that is in sync with their contingency needs,&#8221; said Master Sgt. Ron Przysucha, AFN Misawa detachment chief.

This week&#8217;s contingency, scheduled to end Friday, is staged. It&#8217;s an Initial Response Readiness Exercise, or IRRE, testing airmen&#8217;s ability to quickly deploy to a fictional location. All 15 military members on the Edge radio staff work 12-hour shifts, taking turns as DJs and producing commercials and announcements exclusively geared toward the ongoing exercise.

DJs, in a studio draped with camouflage netting, talk about living wills, immunizations, self-aid buddy care, what to pack in a mobility bag, paying off bills before a deployment and other topics on which airmen may be tested during an IRRE. Their material comes straight from the Airman&#8217;s Manual, reinforcing information airmen should know but may not remember or have to time to read.

The broadcasters try to keep listeners interested by giving away prizes for requesting songs, correctly answering readiness trivia or spicing up dry topics with some humor.

&#8220;Ladies, having your man stolen from you does not count,&#8221; said Staff Sgt. Stephanie Csornok, the detachment&#8217;s noncommissioned officer in charge of radio, while explaining the definition of &#8220;deadly force&#8221; over the airwaves Tuesday.

The Readiness Radio concept is unique to Pacific Air Forces, if not the Air Force, officials say.

The service, he said, is especially helpful for airmen working in isolated locations or shifts during the exercise, who might otherwise be bored.

Przysucha brought Readiness Radio to Misawa about a year ago. Outside the purview of the wing, AFN is not required to take part in wing exercises, Przysucha said. But Przysucha, a veteran broadcaster with stints in Afghanistan, Bosnia and Iraq, has seen firsthand the vital role AFN can play during contingencies.

Readiness Radio not only trains military journalists for deployment, but it also contributes to the wing mission during an exercise, Przysucha added.

On a lighter note, Csornok reminded Edge radio listeners that the station has 45,000 songs in its library.

Przysucha, who&#8217;s staffing the airwaves from 2 a.m. to 4 a.m. this week, said the phones at certain hours ring nonstop for requests.

Not all phone calls, however, are to request a song.