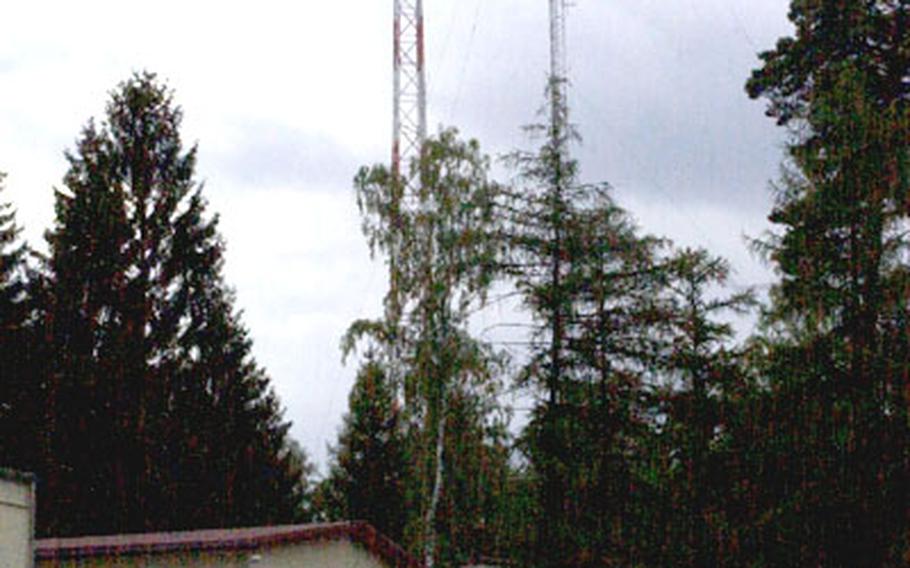 The Pentagon’s over-the-air TV signals for American Forces Network programming broadcasts in Europe are scheduled to go off air by 2010. In Kaiserslautern, Germany, an old tower, right, is currently interfering with reception from the new tower next to it. The old tower will be torn down this month. (Scott Schonauer / S&S)

The Pentagon&#8217;s over-the-air TV signals throughout Europe are scheduled to go off air by 2010. The change will force some Americans living off base to buy, borrow or lease, a satellite dish and receiver to get American Forces Network programming.

Bases in Italy will lose the signal first, when the free AFN channel broadcast is shut down by the end of the year, said Andy Friedrich, deputy for the American Forces Radio and Television Service headquarters in Washington.

Signals in Germany and Belgium will go down four years later.

The broadcasts in Europe are signing off because of the European Union&#8217;s switch from an analog to a digital signal for better picture quality and because of the high cost of keeping the transmitters.

The military is issuing free decoders and satellite dishes to Americans living near Aviano Air Base in Italy, so they can receive the programming at no cost.

The Army hopes to finish a similar program in the next two months in Vicenza, Italy, loaning decoders and dishes to off-base residents for free.

Americans stationed at Navy bases in Italy, however, will have to fork over $565 out of their own pocket to get the decoders. There are about 4,000 off-base households in Naples, Sigonella, and La Maddalena, Italy.

The Navy is running out of time to come up with a plan to get decoders to those who live off base. Friedrich said the loss of AFN viewers off base in Italy is a &#8220;morale blow&#8221; to families.

The over-the-air signal broadcast in Kaiserslautern will be around until 2010, but some viewers have complained about the poor reception.

Capt. Jeff Clark, a spokesman for AFN in Mannheim, said the signal is weaker because an old tower at Pulaski Barracks is causing interference with a new tower. The old tower will be demolished this month.

&#8220;Once that happens, the TV signal will be actually better than before all of this,&#8221; Clark said, referring to the new tower.

AFRTS, which provides command information, entertainment, news and sports to military members and their families through television and radio programming, broadcasts a single channel to 21 locations, from the Marshall Islands to Uzbekistan.

To receive the signal, viewers need an antenna to capture the picture on their tube at home, much like people did before cable and satellite. Most of the TV transmitters are in the NTSC format used in the United States and are low-powered, so they serve only the local U.S. military community, according to the AFRTS Web site.

People living on base can typically receive AFN programming through cable.

Many Americans who live out of the range of the broadcast must buy a satellite and receiver to pick up the signal. The receivers cost between $535 and $565 each but offer more channels and services. They also can be rented for $25 a month.

Stephen Malone, a Defense Department civilian who lives and works in the Kaiserslautern area, said spending that much on AFN programming is too much.