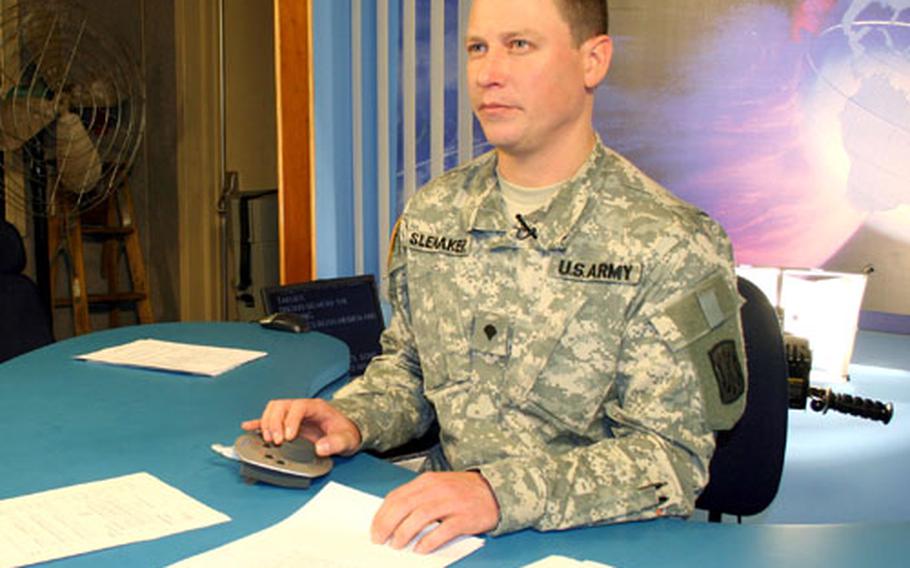 PYEONGTAEK, South Korea &#8212; On any given night, American Forces Network-Korea viewers see the flagship Nightly News program anchored from the the network&#8217;s headquarters studios in Seoul.

But if AFN-Korea had to evacuate Seoul, it would be up to the network&#8217;s Daegu detachment at Camp Walker to keep the network on the air, transmitting live information of importance to the U.S. military communities on the peninsula.

That&#8217;s why the staff at the AFN Daegu broadcast detachment see it as &#8220;huge&#8221; that the station, after months of training and equipment upgrades, made its first-ever live news broadcast on Friday .

The newscast was produced, directed, anchored and aired by the Daegu detachment from 6:45 p.m. to 7 p.m. and was rebroadcast from tape at 10:15 p.m. that night.

The only glitch lasted about &#8220;a half-second,&#8221; when a video dissolved black, leaving viewers with audio but no picture for that instant, said Williams.

It plans to produce the Nightly News at least once a month, and some of those newscasts may be live, Bell said.

Last week&#8217;s newscast followed months of training and other preparation, Bell said. All hands from camera operator, director, anchor and others were involved.

&#8220;He actually watched the newscast being produced and he actually anchored&#8221; at least one news broadcast while there, Bell said.

As a warmup for Friday, the detachment produced the Feb. 28 edition of the news. Although they taped that newscast, they did so &#8220;live-to-tape,&#8221; a method that simulated live-broadcast conditions, Bell said. The tape then was aired from Seoul.

The live and almost-live newscasts were &#8220;the culmination of probably about eight months of technical upgrades and training that finally came together,&#8221; Bell said.

The Daegu detachment&#8217;s existing TV studio recently was fitted with the equipment needed for live broadcasts, part of a $1 million upgrade still under way at the station.