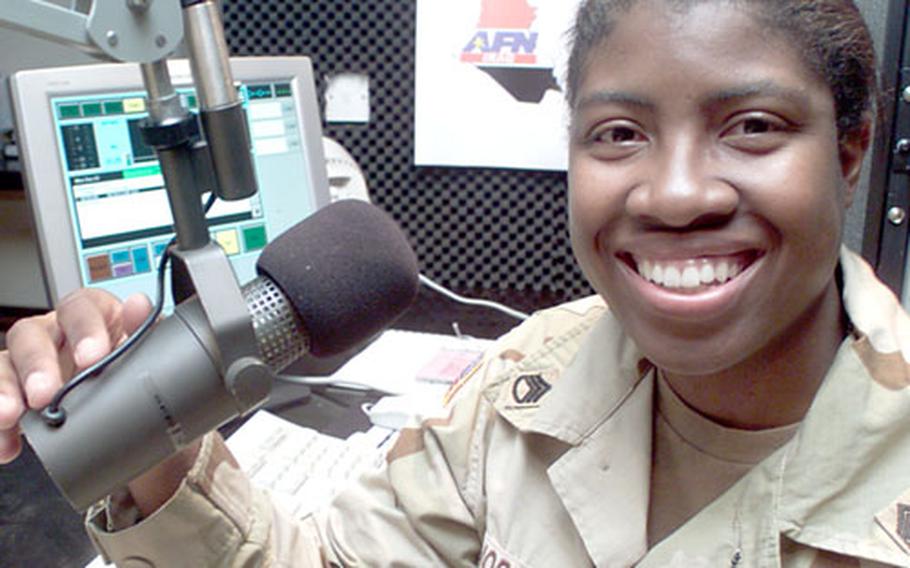 Army Staff Sgt. Kim Almodovar, a member of the 222nd Broadcast Operations Detachment that has deployed to Iraq with the American Forces Radio and Television Service, is one of the broadcasters for AFN-Iraq. (Courtesy of AFRTS)

BAGHDAD, Iraq &#8212; American Forces Network-Iraq will begin live radio broadcasts from Baghdad this week, featuring news, weather, music, tips on Iraq&#8217;s culture and language, and other content tailored to troops in that country.

It will begin broadcasts to the Baghdad area on Wednesday, and hopes to extend them to other parts of Iraq by Christmas.

The shows will originate at newly built studios in the Convention Center in Baghdad.

AFN-Iraq is wrapping up contract negotiations to have a satellite uplink in place so its radio broadcasts can reach other areas of Iraq with major troop concentrations, including Mosul, Tikrit, Balad, Ar Ramadi, Kirkuk and Tallil Air Base, Nouis said.

Before starting those broadcasts, AFN-Iraq will announce where on the radio dial troops can tune them in, Nouis said.

Since October, AFN-Iraq news crews in Iraq have done radio and TV spots about U.S. forces in the country.

But the recorded TV material has been broadcast from Los Angeles as part of American Forces Radio and Television Service programming, Nouis said.

Troops in Iraq have been able to catch the TV segments on sets in unit day rooms or chow halls.

The recorded radio segments have been broadcast from within Iraq over transmitters the U.S. military maintains at various points around the country.