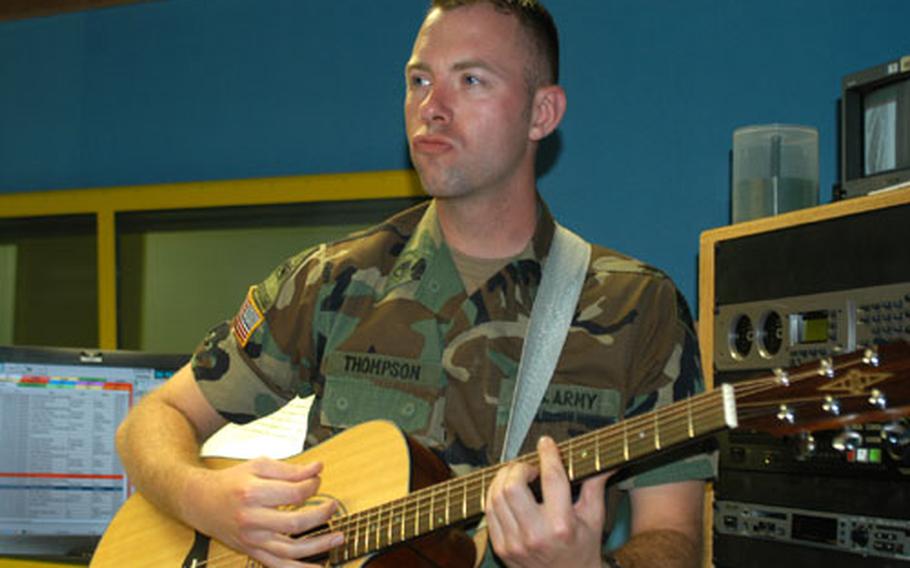 Staff Sgt. Joe Thompson, AFN Hessen noncommissioned officer in charge, jams out on his guitar in the radio studio Thursday in Wiesbaden, Germany. GI Joe, as he&#39;s known on the air, has been playing guitar for over ten years and is regular entertainment at a German pub near Frankfurt. (Jessica Inigo / S&S)

Staff Sgt. Joe Thompson, AFN Hessen noncommissioned officer in charge, jams out on his guitar in the radio studio Thursday in Wiesbaden, Germany. GI Joe, as he&#39;s known on the air, has been playing guitar for over ten years and is regular entertainment at a German pub near Frankfurt. (Jessica Inigo / S&S) 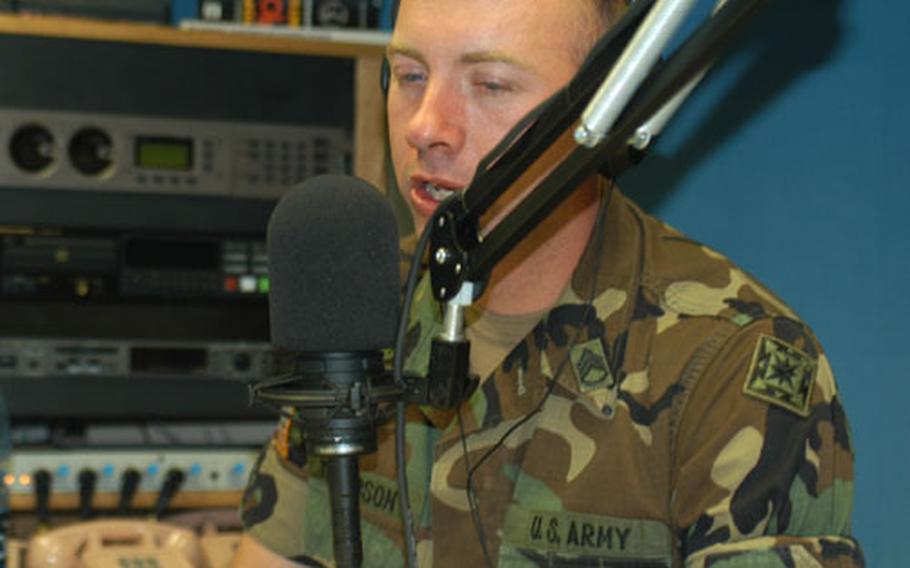 As the station NCOIC, Thompson manages all aspects of AFN radio and television in the six-man shop at the Wiesbaden Army Airfield. (Jessica Inigo / S&S)

As a regular player at the Klamotte pub in Dreieich, near Frankfurt, Thompson said he jams just for fun and to get the crowd into a better rhythm.

Now, at 27, Thompson said he has finally built up enough confidence to break out of his shell and take his music to the masses.

Thompson made his public debut during the Basic Noncommissioned Officer Course at Fort Meade, Md. He said he was itching for something to do after class and on the weekends, so he bought a guitar and was given the opportunity to show off his talent.

In a dark corner of Hard Times Cafe, a bar and chili dive in Laurel, Md., Thompson brought out his guitar and saw for the first time an atmosphere change because of his music.

In a sing-along type show, Thompson made strangers friends and the shy confident with his songs.

When he got back to Germany from the six-week course with his newfound confidence, Thompson took an offer from some friends at a barbecue to start playing at the German pub every couple of weeks.

Thompson looks like the typical cigarette-smoking, laid-back, guitar-playing frontman found in many of his favorite bands, but he&#8217;s as comfortable holding an M16 as he is his acoustic guitar.

With his battle dress uniform on, Thompson morphs into as much a soldier as he does a rock star while on stage.

In both aspects Thompson could be called a natural, since soldiering comes just as easy.

Thompson, who never took guitar lessons and doesn&#8217;t read music, usually plays songs by ear. He admits, though, that sometimes it takes a little more work to get his songs down.

Thompson was drawn to the guitar because his father, David, used to play. His father also played by ear, though never broke out into playing for a public audience as Thompson did.

However, Thompson said playing at the Klamotte feels as if he&#8217;s just playing for friends because of the &#8220;Cheers&#8221; type atmosphere there.

The fairly regular audience puts the soldier at ease while playing, he said.