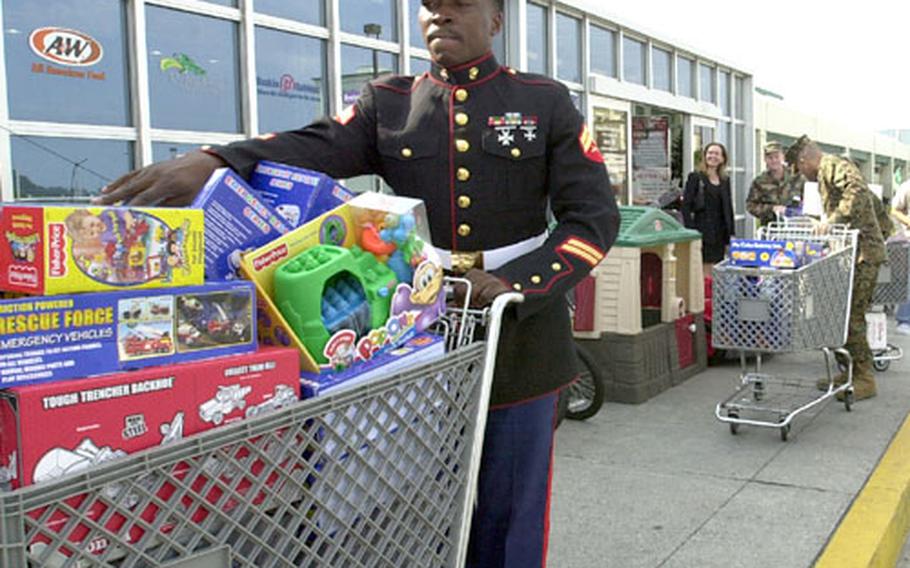 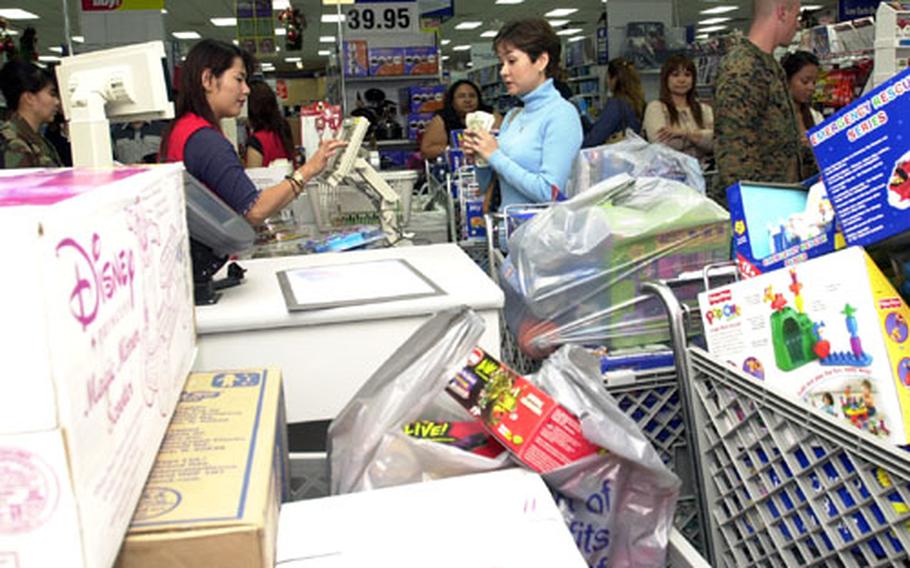 Sheryl Kohatsu, Commander Fleet Activities Okinawa Public Affairs, hands over $900 for toys her command purchased for the Toys for Tots program Friday at the Camp Foster Exchange. The command had collected $250, but the Army challenged them to raise the stakes, and after Kohatsu sent out an e-mail the donation grew to $1,700 in just 90 minutes. She spent the other $800 at the Kadena Air Base Exchange. (Fred Zimmerman / S&S) 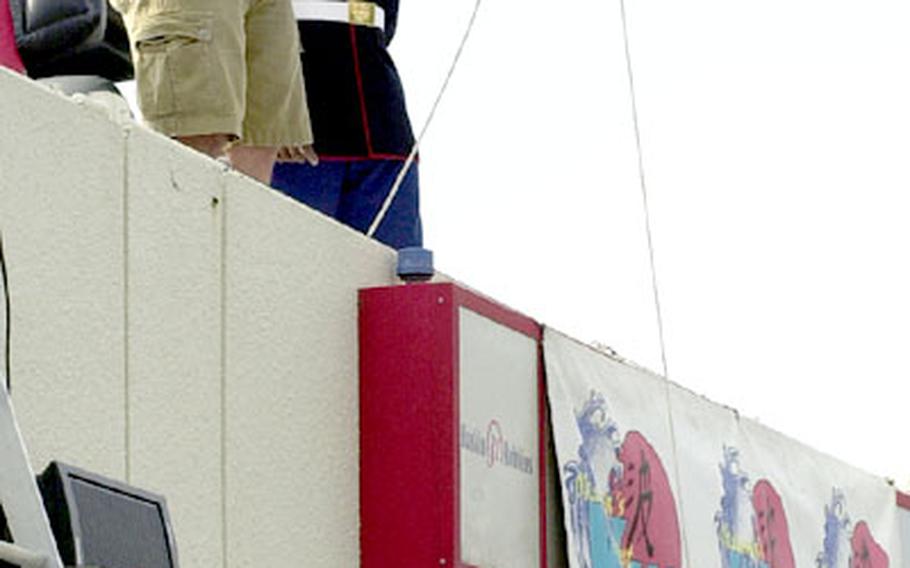 Marine Staff Sgt. Troy Ruby, American Forces Network disc jockey, uses a bucket to get bottled water while on the roof of the Camp Foster Exchange on Friday. Ruby is staying on the roof until a 60-passenger Green Line bus is filled with toys for the annual Toys for Tots drive. (Fred Zimmerman / S&S)

CAMP FOSTER, Okinawa &#8212; An American Forces Network disc jockey perched himself on the roof of the exchange here today and has vowed not to leave until a 60-passenger Green Line bus is filled with toys for the Toys for Tots drive on Okinawa.

Marine Staff Sgt. Troy Ruby laid down the challenge to his listeners to help the annual toy collection, which, so far, has struggled to meet this year&#8217;s goal.

The bus was scheduled to make three trips, one on Friday and two on Saturday, to various bases throughout the island &#8212; from Camp Foster to Kadena Air Base, then to camps Courtney and Kinser, Futenma Marine Corps Air Station, and back to Foster. Santa Claus was slated to ride on the bus and lend a hand for the cause.

Ruby said he came up with the idea after seeing how the program was hurting for donations, and thinking about it on a personal level.

His chances were looking good Friday when, during his morning show, units began calling in and challenging one another to raise money for toys. One of the first units to phone in was the Army&#8217;s 58th Signal Battalion, who said they had collected $600.

Sheryl Kohatsu, with Navy Public Affairs at Commander Fleet Activities Okinawa, said the Army called the show and threw out the challenge to the Navy. At that point, she had collected only $250, but once she sent out an e-mail and CFAO members heard the radio challenge, her donation grew to $1,700 in 1&#189; hours. She bought toys at Kadena and Foster and delivered them to the bus sitting outside the Camp Foster store.

The Navy Federal Credit Union also got in on the fun, collecting more than $1,200.

For his stay on the exchange roof, Ruby brought a sleeping bag, a change of clothes, music and magazines. He said he would have to step off the roof occasionally for restroom breaks, but otherwise, &#8220;Rain or shine, I&#8217;m up here,&#8221; he said. He said he hoped, however, for no rain as he didn&#8217;t take a raincoat.

While Ruby wasn&#8217;t confident about getting off the roof before the weekend, Cpl. Andrew O. Vanhorne, Toys for Tots coordinator, was sure Ruby would come down Friday.

Vanhorne said that Ruby&#8217;s stunt would greatly help because this year&#8217;s drive was slowed by fewer toy-gathering events and fewer servicemembers on the island because of deployments.

Ruby said it&#8217;s a win-win situation for everyone.