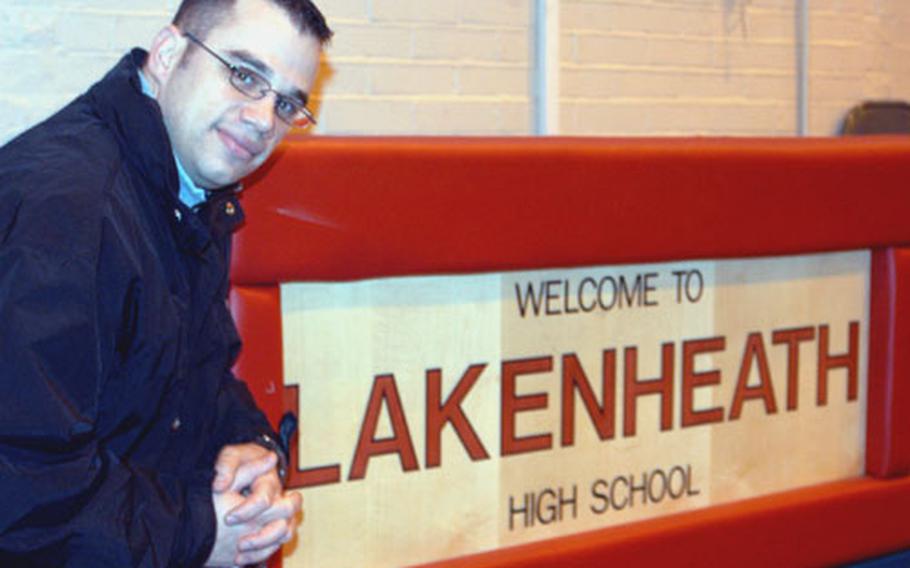 Staff Sgt. Michael Falvo kneels next to the scorer’s table at Lakenheath High School. After three years as the play-by-play announcer for the Lancers, Falvo is leaving to work for the American Forces Network in Portugal. (Bryan Mitchell / S&S)

Falvo is a 28-year-old New York native who wants to be a professional sports announcer.

&#8220;I would like to work for ABC, NBC, ESPN or any one of the networks,&#8221; said Falvo, with the 48th Munitions Squadron at RAF Lakenheath. &#8220;My dream job is to work for the New York Yankees or Pittsburgh Steelers. I moved to Pennsylvania when I was in high school and just fell in love with the team.&#8221;

Working toward that goal, he has been the play-by-play announcer at Lakenheath High School sporting events for several seasons. Falvo has been calling the action from the sideline for roughly 10 years, including a few years at his high school.

He recently was accepted to work for American Forces Network.

Soon he and his wife, Heather, who works at Lakenheath Middle School, will depart for Maryland, where Falvo will attend school at Fort Meade. There, he will be trained in directing, producing, editing and camera operation.

Then they will head to the Azores, an island owned by Portugal in the Atlantic Ocean where the U.S. Air Force maintains a base.

It&#8217;s an island paradise, but Falvo said he and his wife prefer living in England.

For now, however, Falvo is content to continue his career in the Air Force until he earns a bachelor&#8217;s degree.