Afghans vote for a second day in election marred by challenges, over 100 centers remained closed 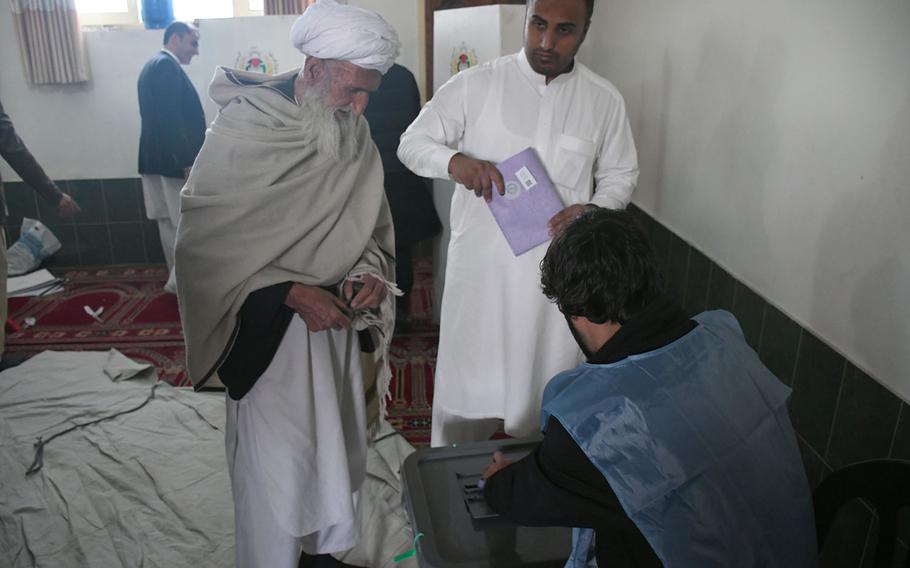 Buy Photo
An election official helps a man cast his ballot for Afghanistan's parliamentary elections on Sunday, Oct. 21, 2018. Voting at the polling station was extended for a second day because of various complications. (Phillip Walter Wellman/Stars and Stripes)

Buy Photo
An election official helps a man cast his ballot for Afghanistan's parliamentary elections on Sunday, Oct. 21, 2018. Voting at the polling station was extended for a second day because of various complications. (Phillip Walter Wellman/Stars and Stripes) Buy Photo
A man scans a ballot for parliamentary candidates in Kabul on Sunday, Oct. 21, 2018. ( Phillip Walter Wellman/Stars and Stripes ) 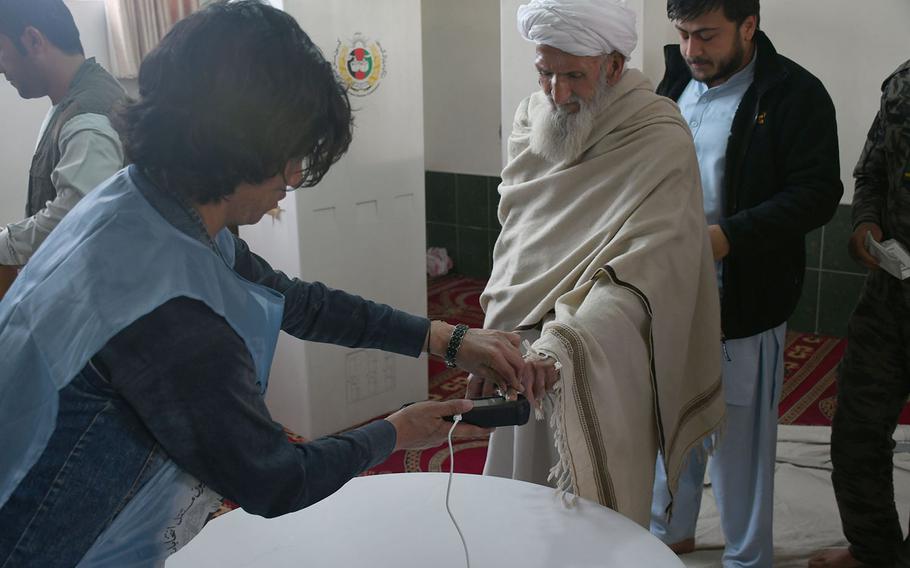 Buy Photo
A man places his finger on a biometric machine at a voting center in Kabul before casting his ballot in the country's parliamentary elections on Sunday, Oct. 21, 2018. Voting at the center was extended from Election Day on Saturday, partly because of problems with the machines. (Phillip Walter Wellman/Stars and Stripes ) Buy Photo
Afghans prevented from voting on Election Day because of technical and organizational problems at their polling center in Kabul vote a day later on Sunday, Oct. 21, 2018. (Phillip Walter Wellman/Stars and Stripes)

KABUL, Afghanistan — Voting in Afghanistan’s parliamentary elections extended into Sunday after the ballot’s initial day was plagued by violence and various technical and organizational problems. However, more than100 polling centers were still unable to open because of security threats, officials said.

Nationwide, 401 polling centers were due to operate on Sunday after running into problems the day before. The Independent Election Commission said only 253 were able to, and that voters registered at the remaining 148 centers would not be able to cast their ballots in the election.

Delayed opening times, absent election officials, confusion over biometric voter registration and missing registration lists led to scenes of chaos at many of the roughly 5,000 polling centers that were supposed to be functioning on Election Day.

The setbacks, however, did not deter voters — many of whom see the elections as a way to improve the dire economic and security situations in the country — from returning to the polls Sunday.

“Yesterday, I was really disappointed that I couldn’t vote, but I’m very happy I was able to vote today and that they gave us the chance to exercise our right,” Kabul resident Ahmad Samir said at a polling center in the capital’s Taimani neighborhood.

The center, inside a mosque, was open Saturday. But frequent glitches with biometric machines — that arrived just a month before the elections and were aimed at stemming fraud — contributed to a backup, which meant voting had to resume Sunday.

Eight boxes filled with ballots from the first day of voting were kept in a corner overnight.

Samir said while he trusted no one tampered with the ballots, he could understand how the situation — repeated at hundreds of polling centers in all corners of Afghanistan — could raise doubts over the election’s legitimacy.

“Maybe some people will start thinking someone stuffed the ballots and that there was some fraud,” he said.

Ahmad Rasouli, an election observer, was one of a dozen men who spent the night inside the mosque and, “only slept for about one or two hours,” to ensure there was no wrongdoing.

More than three million Afghans risked militant attacks and voted Saturday, out of 8.8 million who were registered to vote, the election commission said. It said around 4 million cast their ballots over both days.

Voting was postponed in the southern provinces of Ghazni and Kandahar. Ghazni faced complications, including security concerns, according to the commission. Kandahar delayed its ballot after a deadly attack earlier in the week that killed the provincial police chief.

The United Nations Assistance Mission in Afghanistan said it was encouraged by the number of Afghans who turned out to vote.

“Millions of Afghan citizens braved security threats and, due to technical electoral management issues, waited long hours to cast their votes today for a better future,” UNAMA said in a statement Saturday evening.

“Those eligible voters who were not able to cast their vote, due to technical issues, deserve the right to vote,” the statement added.

Jahed Qayoumi, a master’s student in the capital who voted Sunday, agreed with UNAMA, but was wary about the situation.

“I believe it is my responsibility to vote, so I came today,” Qayoumi said. “But I don’t believe the government will count the votes accurately. In the past we have had bad elections. We have reason to believe it will be the same.”