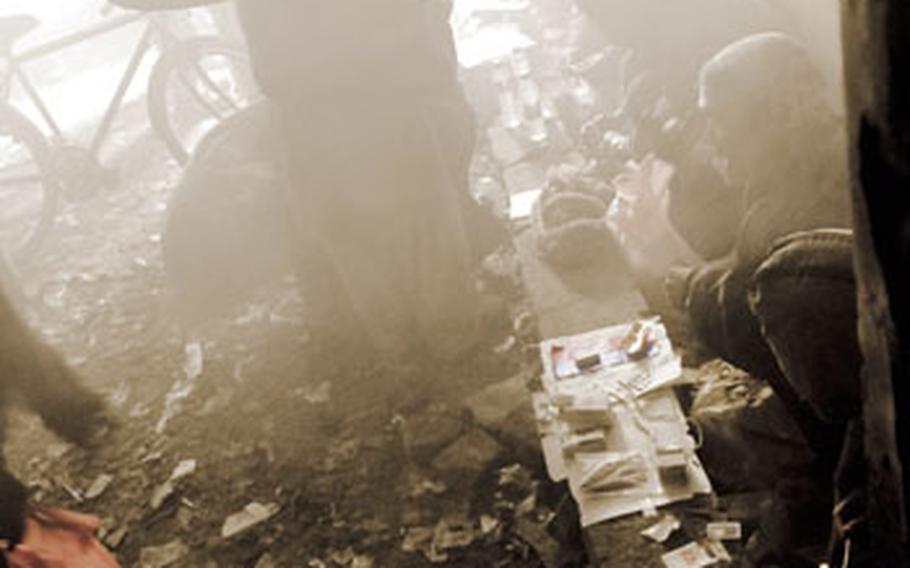 Dozens of men sit inside a smoke-filled room while using drugs in Kabul. Addicts said it costs about 120 Afghanis, or roughly $2.50, to buy a fix. (Michael Gisick/Stars and Stripes)

Dozens of men sit inside a smoke-filled room while using drugs in Kabul. Addicts said it costs about 120 Afghanis, or roughly $2.50, to buy a fix. (Michael Gisick/Stars and Stripes) 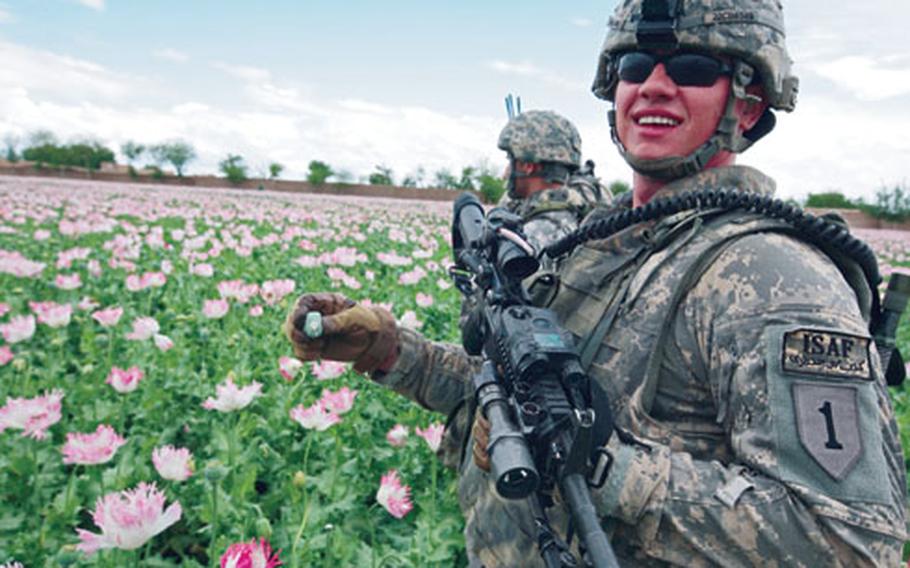 Casey Barlow, 23, of Salem, Ore., squeezes an opium poppy bulb during a 2009 patrol in Kandahar, Afghanistan. (Photo by Drew Brown/Stars and Stripes) 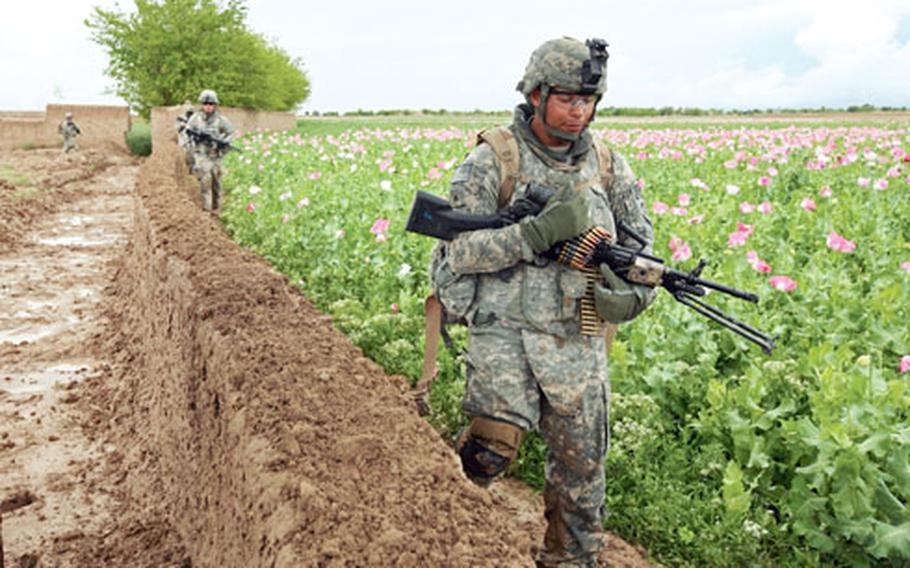 Ronny Hunt, 27, of St. Pauls, N.C., and other soldiers from 3rd Platoon, Commanche Company, 2nd Battalion, 2nd Infantry Regiment patrol Sunday through an opium poppy field in the village of Mazar’eh in Maiwand district, Kandahar province, Afghanistan. The Taliban is estimated to skim at least $100 million a year from the opium trade. (Photo by Drew Brown/Stars and Stripes)

HUTAL, Afghanistan &#8212; At the end of a recent patrol in the nearby village of Mowshaq, soldiers from Company B, 2nd Battalion, 2nd Infantry Regiment were headed back to their trucks when they passed an Afghan man and two boys drying mud bricks in the sun.

The soldiers were nearing the farmer&#8217;s poppy field, when suddenly the man called out to them. The patrol&#8217;s leader, 2nd Lt. Jason Schlachter, asked his translator what the man said.

The man did not protest. But the importance that Afghan farmers place on their opium fields cannot be underestimated. Although growing poppy is illegal, it&#8217;s how most people in rural southern Afghanistan, including here in Maiwand district, about 45 miles north of Kandahar, make a living.

The farmer&#8217;s warning to the soldiers could be interpreted as a warning to anyone who tries to interfere with Afghanistan&#8217;s biggest cash crop. Now U.S. troops in Maiwand could be facing their biggest security challenge yet because of the drug.

"I talked to the governor yesterday," said Akhund, also known as Mullah Masood, during a meeting with officers from 2nd Battalion, 2nd Infantry Regiment, which oversees security for the area. "He said to destroy the poppies in Maiwand district."

According to Akhund, the government of Afghan President Hamid Karzai issued the directive to Tooryalai Wesa, the Kandahar governor, and other provincial leaders last week.

Much about the plan remains unclear. Akhund said he would meet with tribal elders from around Maiwand in the coming days to persuade them to cooperate.

"I think they will accept this," he said. "The government doesn&#8217;t want to destroy all of the areas."

Still, he cautioned that any eradication effort would probably take weeks to implement, since further coordination must occur between Afghan government officials and NATO military authorities.

"Whatever we do has to be the same across the province," Hurlbut said. He suggested that if eradication went forward, U.S. troops would provide outer security for Afghan forces that would actually handle destruction of the fields.

Afghanistan produces more than 90 percent of the world&#8217;s opium, the base ingredient for heroin. The United Nations estimates the drug is worth $3 billion a year to the Afghan economy. The Taliban is believed to skim at least $100 million off the trade, most by taxing production and transport.

No one knows for sure how much opium is under cultivation in Maiwand. But there are dozens of villages spread across the district, and immense poppy fields dot the landscape. Many of the bulbs have already flowered into vibrant shades of white, pink and purple, signaling that the crop is just about ready to harvest.

Local villagers in Maiwand have told U.S. troops that they expect to start the monthlong harvest in about two to three weeks.

Some officers have expressed unease and skepticism about plans to eradicate the crop.

"Maiwand is not ready for eradication," said Capt. Trevor Voelkel, commander of the battalion&#8217;s Company C, whose troops oversee security in the center of the district. "We don&#8217;t have anything else to help the farmers with in terms of providing alternatives."

"We want to stop opium and substitute other crops," he said. "But there are still a lot of systems that need to be set up in place first."

"If you take away their opium, it gives them no choice but to turn to the Taliban," he said.

Both Voelkel and Brooke were interviewed before the eradication plan was an nounced Friday.

Akhund said that the provincial government had promised 120 tons of wheat seed as a substitute for poppy. But how that will alleviate the loss of income from this year&#8217;s crop or possible hunger in the coming months is also unclear.

Skepticism over eradication has been voiced by U.S. policymakers at the highest levels. The United States spends about $800 million a year to eliminate opium and other drugs in Afghanistan, an effort which Richard Holbrooke, the U.S. special envoy for Afghanistan and Pakistan, described recently as "the most wasteful and ineffective program I have seen in 40 years."

"Targeting those who grow the poppy will continue, but focus will shift to higher-level drug lords," the White House said in a strategy paper released last month.

The United Nations says that half of the provinces in Afghanistan are now free of opium, but five provinces in the south &#8212; Helmand, Kandahar, Uruzgan, Nimruz and Farah &#8212; still account for 98 percent of percent of all production.

Akhund, the district leader, said he believes the amount of land under poppy cultivation in Maiwand is down by 40 percent from last year.

The Afghan government announced last week that eradication had begun with the backing of NATO forces in neighboring Helmand province, which alone accounts for more than half of opium production in the country.

But fighting in the province has also flared. The Associated Press reported Friday that five people were killed and 17 wounded after a Taliban suicide bomber struck a counternarcotics police unit in Lashkar Gah.

Corruption was also a problem. Both Akhund&#8217;s predecessor and the previous police chief for Maiwand were fired for taking payoffs to spare certain fields, according to several U.S. officers.

Akhund said he intended to involve tribal elders in the process of selecting which fields would be destroyed. He said he had warned them in a meeting earlier this week not to attack Afghan or NATO units involved in the effort.

But the Taliban have reportedly been demanding money from villagers in Maiwand to protect the poppy fields.

"It&#8217;s going to get very interesting over the next couple of weeks," said Hurlbut.