Afghans say they have retaken key district from Taliban 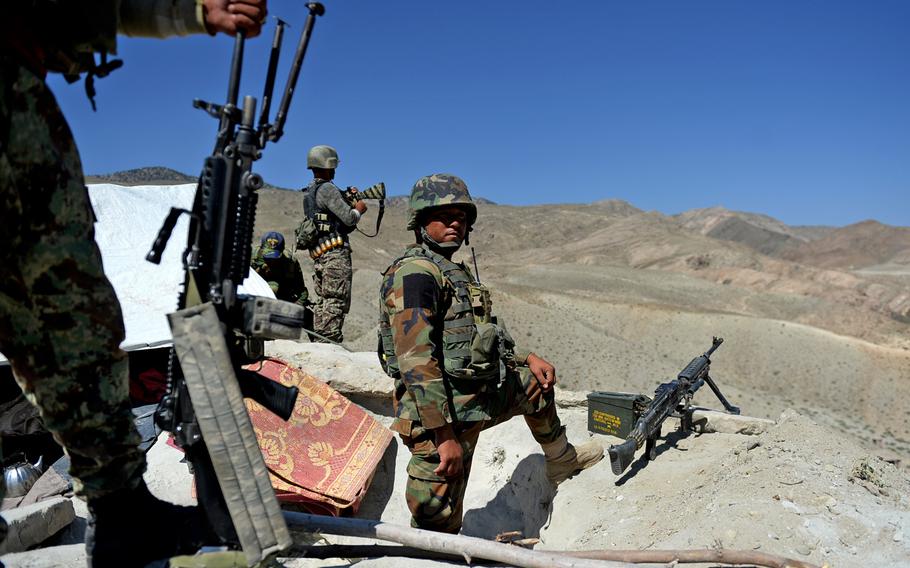 Buy Photo
Afghan troops occupy former Taliban fighting positions captured during Operation Iron Triangle in eastern Afghanistan in August 2015. The operation aimed to drive Taliban forces from areas that had not seen government troops in more than a decade. (Josh Smith/Stars and Stripes)

The government sent reinforcements to the district on Wednesday, a day after insurgents took control of the district center and police headquarters following days of intense fighting. The counterattack began Thursday. The ministry said the operation was led by its chief of staff.

Helmand Gov. Mirza Khan Rahimi said 220 insurgents were killed in the fighting, but the Defense Ministry said 220 were dead and wounded. The ministry said government forces had confiscated "a large number" of weapons and ammunition and that hundreds of mines were defused. Rahimi said 33 members of the military and police had been killed since Tuesday.

American aircraft carried out 18 airstrikesover the past week in support of the counteroffensive "against individuals threatening the force," Col. Brian Tribus, spokesman for the NATO-led coalition, said.

Some fighting continued, Rahimi said, as security forces cleared remaining insurgents in and around the district center. Then, he said, government forces would press further into Taliban-controlled territory.

"Other areas of Helmand will be cleared of the presence of insurgents very soon," he said.

The Taliban have long had a grip on the opium-growing area, profiting from its lucrative drug trade.

The rapid fall and recapture of Musa Qala has played out in similar scenarios in remote districts across Afghanistan this year. Insurgents have repeatedly demonstrated their ability to launch quick, coordinated strikes, taking control of district centers and police headquarters, only to be pushed out again days later by government reinforcements.

Taliban fighters carried out a similar attack in Musa Qala in June, wresting control of several military and police checkpoints before being pushed out.