Hundreds of trucks wait to enter Pakistan at the the border crossing at Torkham Gate in Afghanistan. Pakistani and Afghan forces exchanged fire on Sunday, June 12, 2016, over construction on the Pakistani side of the border. (Josh Smith/Stars and Stripes)

Hundreds of trucks wait to enter Pakistan at the the border crossing at Torkham Gate in Afghanistan. Pakistani and Afghan forces exchanged fire on Sunday, June 12, 2016, over construction on the Pakistani side of the border. (Josh Smith/Stars and Stripes) 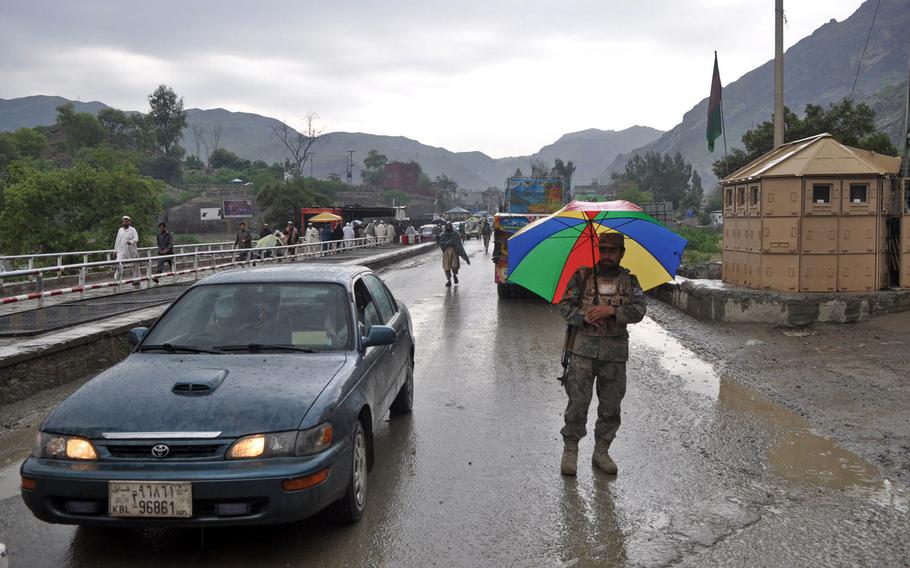 An Afghan Border Police officer shelters himself from the rain while guiding traffic at Torkham Gate, Afghanistan's busiest border crossing. Pakistani and Afghan forces exchanged fire on Sunday, June 12, 2016, over construction on the Pakistani side of the border. (Josh Smith/Stars and Stripes)

KABUL, Afghanistan — A border dispute between Afghanistan and Pakistan that escalated in recent days has led thousands of Afghans to say they would take up arms on behalf of the government to fight long-time rival Pakistan, officials said.

Clashes erupted Sunday amid growing anger over Pakistan’s moves to tighten border controls, building a gate at the well-trafficked Torkham crossing and requiring Afghans to have a valid passport and visa to enter the country, rather than just an identification card.

Authorities in Kabul have opposed the gate, which is being constructed on land claimed by both countries along the strategically important Khyber Pass, about 120 miles east of Kabul.

Pakistani officials said the new measures were needed to help keep militants out.

A cease-fire appeared to be holding Thursday after days of sporadic cross-border fire that, according to local officials, left three Afghan border guards dead and killed a Pakistani army officer. Dozens of others were reported injured on both sides.

“Thousands of people contacted our office from different provinces of Afghanistan saying they are ready to come over and help out and even go to the front line to fight,” said Attaullah Khogyani, spokesman for the governor of Nangarhar province, where the Torkham crossing is located.

The clashes at the Torkham crossing mark the latest setback for Afghan President Ashraf Ghani’s efforts to improve relations with Pakistan in the hope Islamabad could help bring the Taliban to the negotiating table for peace talks aimed at ending the 15-year war.

However, the Taliban have refused to join even exploratory talks and have stepped up attacks across the country, leading to increased criticism of Pakistan by Ghani.

Border disputes are not uncommon and in the past Islamabad has closed the Torkham crossing — key to commerce and transport. But the fatal exchange of fire over the past few days was the first in recent memory and sparked a desire by some Afghans to join the fight.

Torkham is located on the 1,500-mile-long border known as the Durand Line, which is largely unrecognized in Afghanistan.

British colonialists imposed the line on the Amir of Afghanistan in the 1890s in an attempt to strengthen British control over parts of northern India, of which Pakistan was then still a part. It cuts through Pashtun tribal areas, dividing speakers of the Pashto language. Pakistan inherited the border when it became a state in 1947, but there has never been a formal agreement on it with the Afghan government. Thus the location of the gate has angered many Afghans.

“We are not going to give an inch of our soil to them,” said Zikeria Muneeb, 28, a college student in Kabul who told Stars and Stripes that he and more than 20 classmates, have agreed to join the Afghan army if heavier fighting with Pakistan breaks out. “We know how important this occasion is; it’s an issue of do or die.”

In a video posted on Facebook, Haji Naeem from Baghlan province said he and 200 acquaintances were also ready to take up arms against Pakistan, “We want to fight, we can use our own guns if the government can’t provide us with weapons and ammunition,” he said in the video.

Meanwhile, in the fight against the Taliban, the Afghan military struggles with desertions and in some cases reluctance to go after the insurgents.

Emily Winterbotham, a research fellow at the Royal United Services Institute, said the outpouring was interesting, but unlikely to result in large numbers joining the Afghan security forces.

“I think a lot of times people get very excited and it turns into this nationalist fervor that we see,” Winterbotham said.

But Khogyani, from the Nangarhar governor’s office, said the sentiment was worrying too.

“We want to try to solve such issues via diplomatic channels,” he said, “but if people are determined to fight, how can you stop them?”

Shakeib Noorani, 37, a civil engineer in Logar province, said he is ready to join the army because he, like other Afghans, is fed up.

“The bloodshed that is going on in our country right now is all because of the Pakistanis,” he said. “Our patience has run out with Pakistan.”