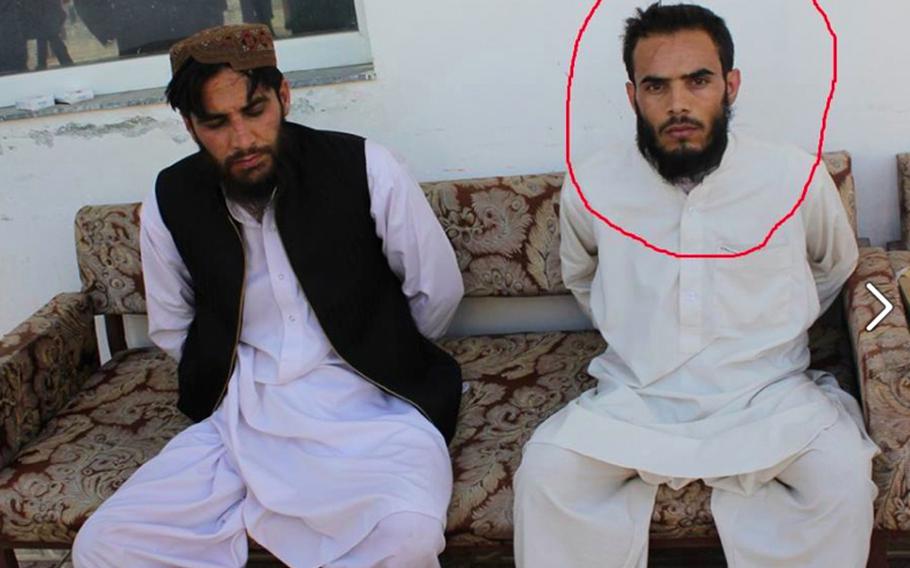 Midlevel Taliban commander Qari Haleem, right, is detained with a man referred to as his deputy in this Facebook photo posted by the Kunduz provincial police in Afghanistan. A spokesman for the police said it will resist a request for Haleem's release by the local representative of Afghanistan's High Peace Council, who claims Qari has disavowed the militant organization. Security officials across Afghanistan say former detainees are behind some of the current violence in the country and have criticized release policies. ()

Midlevel Taliban commander Qari Haleem, right, is detained with a man referred to as his deputy in this Facebook photo posted by the Kunduz provincial police in Afghanistan. A spokesman for the police said it will resist a request for Haleem's release by the local representative of Afghanistan's High Peace Council, who claims Qari has disavowed the militant organization. Security officials across Afghanistan say former detainees are behind some of the current violence in the country and have criticized release policies. () 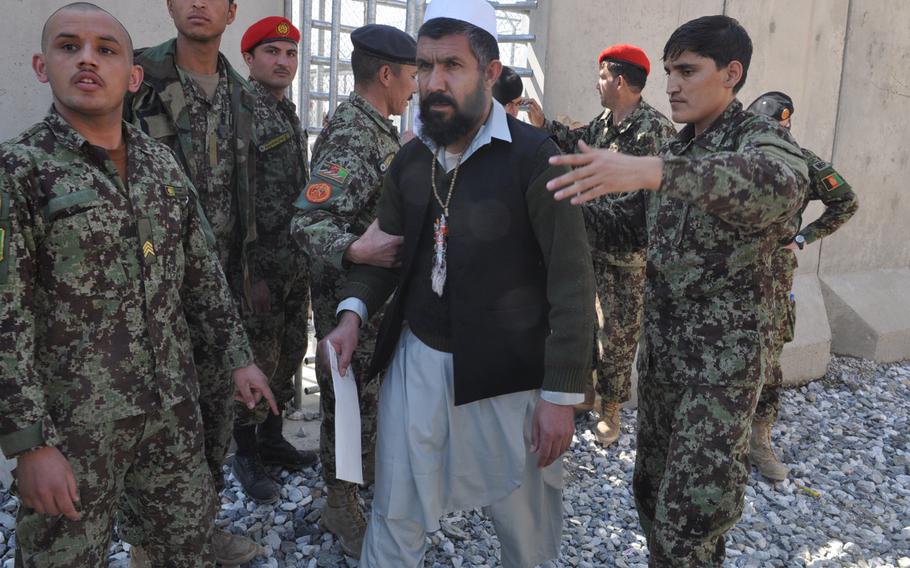 A prisoner is led away after being released on March 25, 2013, as part of a ceremony to mark the handover of Parwan Prison from U.S. to Afghan control. Delays in the handover raised tensions between Washington and Kabul. (Heath Druzin/Stars and Stripes)

KABUL, Afghanistan — Depending on whom you believe, Qari Haleem was arrested while returning from Pakistan after a doctor’s visit or while carrying orders to commit attacks against police in northern Afghanistan.

Now jailed in Kunduz, the midlevel Taliban commander is part of a debate over detainee releases in Afghanistan and their role in the fighting in the country. A government peace council is urging Haleem’s release, but Kunduz police have vowed to keep him in custody.

They say former detainees are behind much of the violence flaring in Kunduz province, including a onetime commander released by local officials and a former shadow governor for the province freed last year.

“The release of these men is a big problem for us because all are involved in attacks and have been caught with great sacrifice,” said Sayed Sarwar Hussaini, a spokesman for the Kunduz police.

Their claims echo growing complaints from security officials across the country. They come as Afghan forces are being challenged by strong militant offensives in several provinces while receiving less support from the NATO-led military coalition.

Much of the criticism has been aimed at President Hamid Karzai, whose government has pushed for releases of former Taliban in Afghanistan and Pakistan as a step toward reconciliation. Another aspect of the problem is hardly new — the corruption of the judicial system across Afghanistan.

“There are ways to release people if you’ve got money or influence. That’s always been the case,” said Kate Clark, a researcher with the Afghanistan Analysts Network. “I think what’s different this year is Afghans are also in charge of fighting the insurgency. When the international forces were in charge of the fighting, no one was too much concerned, but now it’s become much more urgent, much more important.”

Others say the prominence of the issue is merely an effort by police forces to deflect blame from their own failures.

“They’re trying to distract from the fact they can’t secure the province,” said Asadullah Omarkhail, the Kunduz representative of the High Peace Council, who was working with Haleem.

In July, the Kabul police chief blamed a series of attacks in the city on detainees released from Parwan Detention Center at Bagram Air Field. In the same month, the slaying of 15 travelers in Ghor province, a traditionally quiet region of central Afghanistan, was pinned on former Taliban detainees in the province who had been freed several months earlier.

Those claims have put pressure on Karzai, whose most controversial releases included the 65 high-level detainees released from Parwan earlier this year. Karzai contended prisoners at Parwan were being radicalized through mistreatment, calling the prison a “Taliban-producing factory” while it was under U.S. control.

The U.S. strongly opposed the releases, claiming the men had committed serious attacks and were a danger to return to the fighting. Yet the move was widely supported by Afghan media at the time with often sympathetic portrayals of the detainees.

Karzai, now at the end of his term as president, faces more open criticism on the issue. His defense minister, Bismillah Khan Mohammadi, told parliament in June that as many as 80 percent of those set free returned to the fighting. In July, his ardently anti-Taliban first vice president, Mohammad Younus Qanooni, claimed that those former prisoners “have carried out more crimes than before.”

A spokeswoman for Karzai called such claims “baseless” and blamed them on foreigners who want to continue detaining Afghans.

“This foreign designed narrative is purposely given to some local Afghan officials in different parts of the country, and later being aired by media outlets,” the spokeswoman, Adela Raz, wrote in an email. “We strongly reject such irresponsible remarks by some Afghan officials.”

Independently verifying the connections between former detainees at Parwan and current violence is difficult, however. The names of those released were not made public, and neither the Afghan Ministry of Defense nor the U.S. Department of Defense have spoken about the issue.

“We do not have statistics that reflect recidivism rates for the transferred Afghan detainees. The few former detainees who choose to return to the fight do so at their own potential peril,” said Lt. Col. Myles B. Caggins III, Defense Department spokesman for detainee policy.

The issue is complicated by a judicial system rife with corruption, where bribes and influence play a regular role in case outcomes. According to a 2010 United Nations report, prosecutors and judges were the most commonly bribed government officials in Afghanistan, more than customs officials and municipal authorities. Police were fourth on the list.

As a result, legitimate suspects with connections often win early release while the innocent who lack resources languish, Clark said.

“If you’ve got money, if you’ve got influence, whether or not you’re innocent, you can usually find your way out,” she said.

Police in Ghor say a local parliament member intervened on behalf of the suspects in the killings there, allowing for their release. Kunduz police say two Taliban commanders now leading the fighting there were freed recently by the local judiciary for unknown reasons.

One, Qari Bilal, was arrested by ISAF in 2011. Hussaini, the Kunduz police spokesman, said he was released after being handed over to local officials, then arrested and set free again. The other, former Taliban shadow governor Maulawi Abdul Salam, was also released last year for unknown reasons, Hussaini said. He claimed both men are now leading attacks against government forces in Kunduz.

Haleem, now in Kunduz police custody, was arrested last month in Baghlan province on his way from Pakistan. In a letter sent to Kunduz police through the provincial governor’s office, later posted to Facebook by the police, members of the High Peace Council in Kunduz said Haleem had been in touch with them before his arrest.

The council, part of the Karzai government’s effort to reintegrate Taliban members, regularly works with former and current high-level commanders and political members to guide their departure from the organization without going through the criminal justice system.

Omarkhail, the council’s Kunduz representative, said the letter was merely a confirmation that Haleem had expressed interest in the reconciliation process before his arrest. Omarkhail said he told Haleem at the time that because preparations for the country’s presidential runoff in July were draining many of the office’s resources, Haleem would need to wait until after the vote to formally begin the process, he said.

The Kunduz judiciary will decide whether Haleem deserves to be released, he said.

Kunduz police say Haleem leads 500 fighters and had staged recent attacks against Afghan police and soldiers. Omarkhail disputed this, saying Haleem was a former Taliban education minister with little, if any, involvement in recent attacks.

“Qari Haleem is not a very important figure of the Taliban,” he said.