Afghans planning to migrate to Europe fear fallout from attacks Buy Photo
A billboard placed by the German Embassy in Kabul, Afghanistan on Nov. 15, 2015, asks Afghans to think twice before trying to migrate to Europe. Waves of Afghans have fled to Europe trying to flee violence and economic problems. (Stars and Stripes)

Buy Photo
A billboard placed by the German Embassy in Kabul, Afghanistan on Nov. 15, 2015, asks Afghans to think twice before trying to migrate to Europe. Waves of Afghans have fled to Europe trying to flee violence and economic problems. (Stars and Stripes) 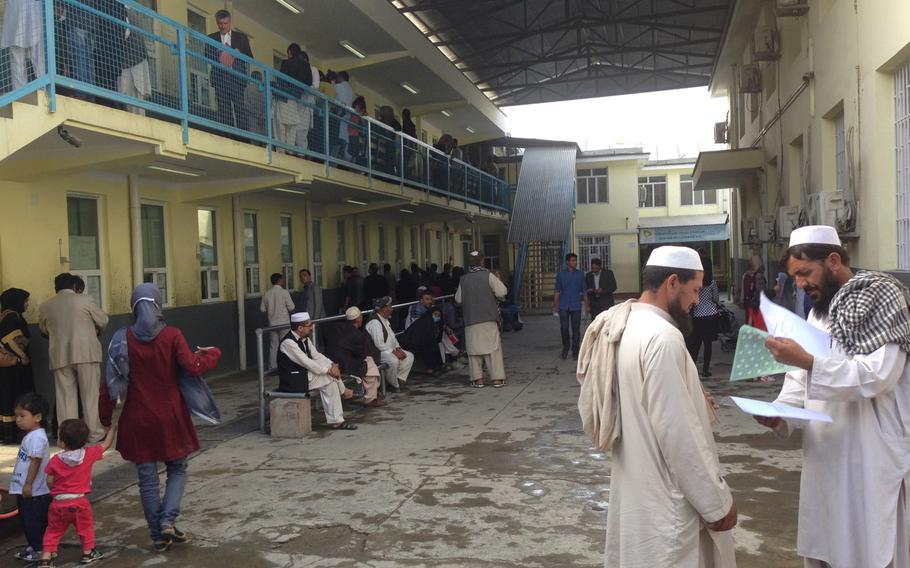 Buy Photo
Hundreds of people arrive at the passport office in Kabul, Afghanistan on Sept. 16, 2015, to apply for new travel documents. Many of them will join the thousands of Afghans, Syrians, Iraqis and other migrants seeking a new life in Germany and other European nations. (Slobodan Lekic/Stars and Stripes)

KABUL, Afghanistan — A number of Afghans hoping to seek asylum in Europe are worried that recent attacks in the West carried out by people of Afghan origin will hurt their chances of being welcomed abroad.

On Monday, an alleged 17-year-old Afghan refugee attacked passengers on a train in Germany with an ax, leaving four seriously injured. The incident came after a 29-year-old Afghan-American shot 49 people dead in a gay nightclub in Orlando, Fla., last month.

Authorities have recently said that the person responsible for the train attack may have been from Pakistan rather than Afghanistan.

“This is going to put Afghans and other migrants in danger of deportation,” said Kabul resident Abdul Sabour Amani, 32, who is planning to migrate to Germany in the near future. “If they kill innocent people there, that will make it harder for us.”

Despite earning a degree in literature from Kabul University in 2011, Amani has been unable to find a job in his home country. He said the situation had forced him to contact illegal smugglers, who could help him travel to Germany. He said he was nervous about going, especially after the recent attacks.

German media reported Monday’s attacker registered as a refugee in Germany last year as 17-year-old Riaz Khan Ahmadzai. He allegedly pledged allegiance to the Islamic State before attacking passengers on a regional train in Bavaria. At least four on board were injured, together with one person whom he attacked while fleeing the train. He was later shot dead by police.

Experts who viewed a video of Ahmadzai later released by the Islamic State group said the attacker appeared older than 17 and spoke with a Pakistani accent. It has been suggested he may have pretended to be Afghan in order to have a better chance of getting asylum.

Regardless of the Ahmadzai’s nationality, Asif Ahmadzai of Kabul (no relation to Riaz Khan Ahmadzai) said he and his family were worried that such violence would have repercussions for Afghan migrants.

Ahmadzai has a brother in Germany and another in France. Two of his cousins left for Europe last week via Iran, and five other relatives and friends are planning to make the journey soon, he said.

“Neither of my brothers, in Germany or France, has been accepted yet, so I hope this violence in Germany does not harm their asylum-seeking processes,” Ahmadzai said, though he said he feared it would.

According to the German newspaper Der Tagesspiegel, in Germany alone, more than 90,000 Afghans who applied for asylum in 2015 and 2016 are waiting for their applications to be fully processed. They are the second-largest nationality applying for asylum after Syrians. More than half will be rejected, the paper reported.

The rejected applicants in Germany and other European countries could be deported back to Afghanistan after spending large sums of money and often risking their lives to reach the Continent. Yet many in Afghanistan are still planning to migrate despite the odds, saying the economic and security situation in their country gives them little choice.

Critics of the U.S. intervention in Afghanistan say continued migration is one of the biggest indicators that U.S.-led state building efforts — which have spanned 15 years and cost U.S. taxpayers more than $113 billion — have failed.

“When life is tough for you, the insecurity, the joblessness, social problems — when the circle of nightmare is getting smaller and smaller around you — that is when you decide to take the risk and go to Europe,” said Mohammad Ayoub, whose 26-year-old son is stuck in Turkey after leaving Afghanistan for Germany eight months ago.

After hearing of Monday’s attack, Ayoub said his son was now seeking to go to another country instead of Germany.

“This is attack is more bad news for Afghans waiting to get asylum or accepted into Germany and other countries,” Ayoub said. “But I ask the European countries to help these people by still accepting them.”