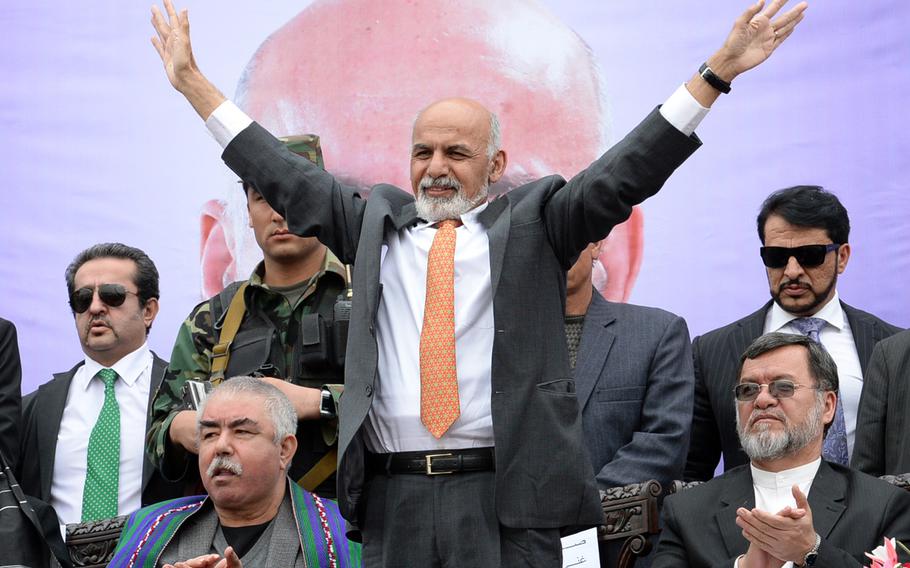 Then-presidential candidate Ashraf Ghani waves to the crowd at a campaign rally in Kabul on April 1, 2014. Ghani assumed Afghanistan's presidency in September 2014. (Josh Smith/Stars and Stripes)

KABUL, Afghanistan — Afghan President Ashraf Ghani is making a renewed effort to find a political solution to the war with Taliban insurgents.

A previous effort was scuttled after the announcement in July that the insurgent group’s spiritual leader and founder, Mullah Mohammad Omar, had died two years earlier.

Pakistan will host representatives from Afghanistan, the United States and China for a meeting Jan. 11 in the capital, Islamabad, to work out a framework for peace negotiations, Ghani said in a televised speech Thursday.

“The aim is to make a framework for a sustainable peace as soon as possible,” he said.

Ghani has made securing a peace agreement with the Taliban his foremost goal as president. He has made overtures to Pakistan, which many see as the insurgent group’s primary supporter. Pakistan hosted some exploratory talks earlier this year aimed at establishing a framework for more formal peace talks between the Afghan government and the Taliban. But that effort ended abruptly with the news of Mullah Omar’s death and dissatisfaction among some Taliban with his successor, Mullah Akhtar Mansoor. That has led to worries that a fractured movement will complicate any negotiations.

Reports earlier this month that Mansoor was either killed or badly wounded in a shootout in Pakistan with a rival Taliban faction were denied in an audio recording purported to be from Mansoor. In that recording, he also said the Taliban would continue fighting and resist pressure to reach a political settlement.

Ghani alluded to a possible split in his address Thursday.

Maulavi Shahzada Shahid, a spokesman for Afghanistan’s High Peace Council, said that outside countries must defer to Afghans if the talks are to bring different insurgent factions together.

“The primary players in the peace talks need to be Afghans on both sides,” he said.

The U.S. welcomed news of the four-nation talks, which are an extension of discussions that started at the Heart of Asia conference in Islamabad in early December.

“The United States continues to support an Afghan-led and Afghan-owned peace process as the surest way to end violence and ensure lasting stability in Afghanistan and the region,” said Selim Ariturk, a spokesman for the U.S. Embassy in Kabul, in an email.

“We look forward to continued consultations in January, and indeed continued partnership throughout the new year, with Afghanistan, Pakistan, and China, as agreed to at the recent Heart of Asia ministerial.”

Taliban spokesman Zabiullah Mujahid declined to comment on the meetings.

For years, U.S. and Afghan leaders have said that a negotiated peace was the only way out of the war, but negotiations have never gotten past the preliminary stage.

Efforts to launch talks in 2013 quickly fizzled after the Taliban opened a political office in Doha, Qatar. Then-Afghan President Hamid Karzai was furious that the group had raised its white flag and had acted like a government in waiting rather than a group ready to make a deal.