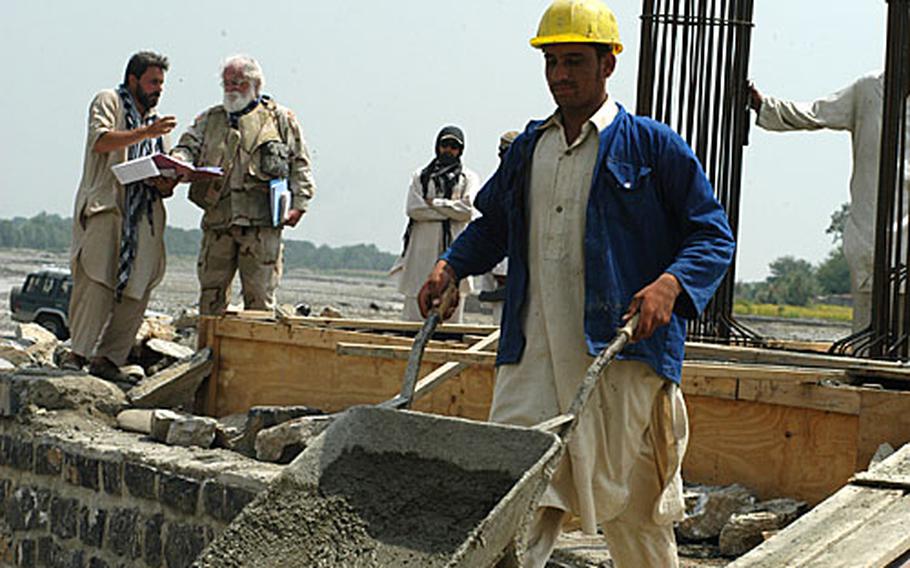 An Afghan worker pushes a wheelbarrow away from the Dadwal Bridge in Khost province while U.S. Army Corps of Engineer liaison Michael Butler discusses progress on the bridge with the Turkish contractor supervising the project. (Bryan Mitchell/ / S&S)

An Afghan worker pushes a wheelbarrow away from the Dadwal Bridge in Khost province while U.S. Army Corps of Engineer liaison Michael Butler discusses progress on the bridge with the Turkish contractor supervising the project. (Bryan Mitchell/ / S&S) 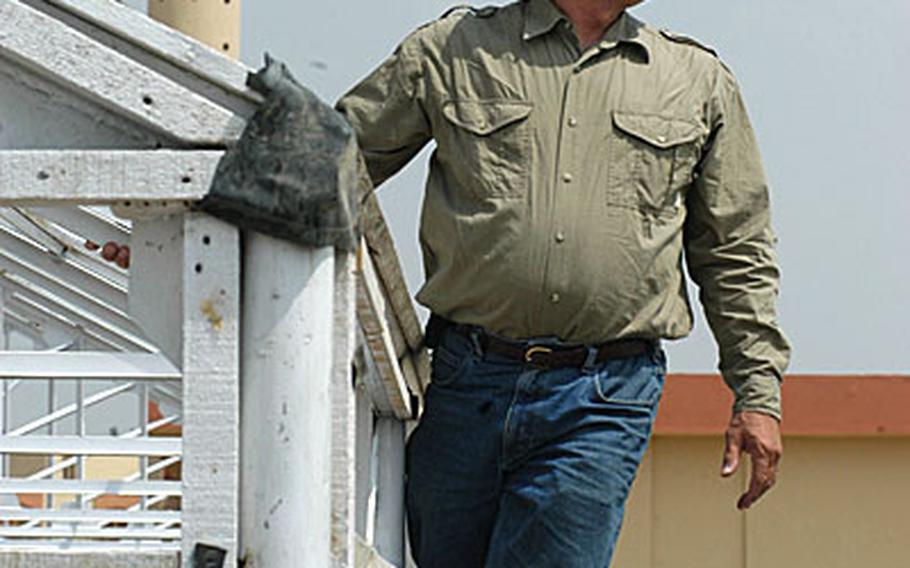 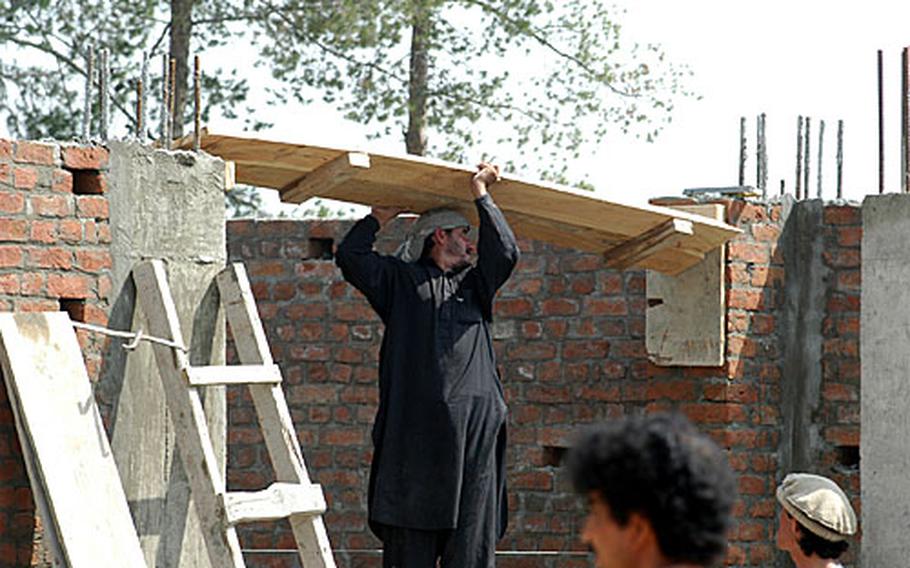 An Afghan laborer puts a roofing plank in place at the Mandozayi community center in eastern Afghanistan. (Bryan Mitchell/ / S&S)

FORWARD OPERATING BASE SALERNO, Afghanistan &#8212; The only sound more frequent than the echo of helicopter blades across this forward operating base is the banging of hammers.

As choppers come and go, ferrying wounded troops and combat boots across southeastern Afghanistan, scores of indigenous laborers sweat under the relentless sun converting this once-spartan base into an enduring compound for coalition forces and, some day, the Afghan National Army.

The most significant project under way is construction of a new hospital to replace the makeshift tent complex now home to the 396th Combat Support Hospital. U.S. contracting company KBR is overseeing a crew of several dozen Afghans working to finish the $1.4 million, 23,000-square-foot hospital by December.

The hospital&#8217;s commander said the new complex will provide a safer and more sterile environment, boosting both security and hygiene for physicians and patients.

Located approximately 10 miles from the Pakistan border in a region teetering between volatility and relative calm, FOB Salerno is in a spot where militants can fire rockets and mortar rounds toward the base, and then flee into the often-lawless border region.

Lately, the hospital has been busier than in the recent past, tending to 300 percent more patients than at this time last summer. While the military and the media focus on the &#8220;surge&#8221; in Iraq, insurgents in this country have boosted their attacks, increasingly with more potent Iraq-style tactics such as car bombs, suicide vests and roadside explosions.

Last week, the 396th Combat Support Hospital cared for a cadre of children caught in two vicious suicide attacks in Khost province, including one that killed three U.S. troops working on a reconstruction project. If the trend continues, the hospital under construction will be well received.

Phillips, 45, of Sioux Falls, S.D., said the hospital will be divided into two parts: a trauma wing for emergency care; and a primary care section to deal with traditional aches, pains, illnesses and ailments.

Like its nylon predecessor, the hospital also will play host to the occasional Afghan health clinic, providing surgeries and treatments unavailable in the rest of the poverty-stricken Khost province.

KBR has a handful of engineers on hand to supervise, but the majority of labor is conducted by Afghans. They earn roughly $8 to $11 per day for work that includes plastering, framing and roofing.

KBR supervisor Randy Gustafson, 49, of Bellingham, Wash., said the Afghans are eager to work and quick to learn.

Afghans also are developing skills to build a new mosque in the heart of the base.

On Thursday, Sgt. Dane Seydler, 26, an Army reservist from Amarillo, Texas, was supervising a team of locals sanding the mosque before its next coat of paint.

Phillips said the hospital, as well as other smaller projects on FOB Salerno like the mosque, are vital to the image that America is here to help, but not here to stay.

&#8220;It&#8217;s not just a slogan anymore, Afghans are doing the work, Afghans are learning the work. We want to send a clear message that we are not here forever. This is your base, and you have to decide how to run it.&#8221;