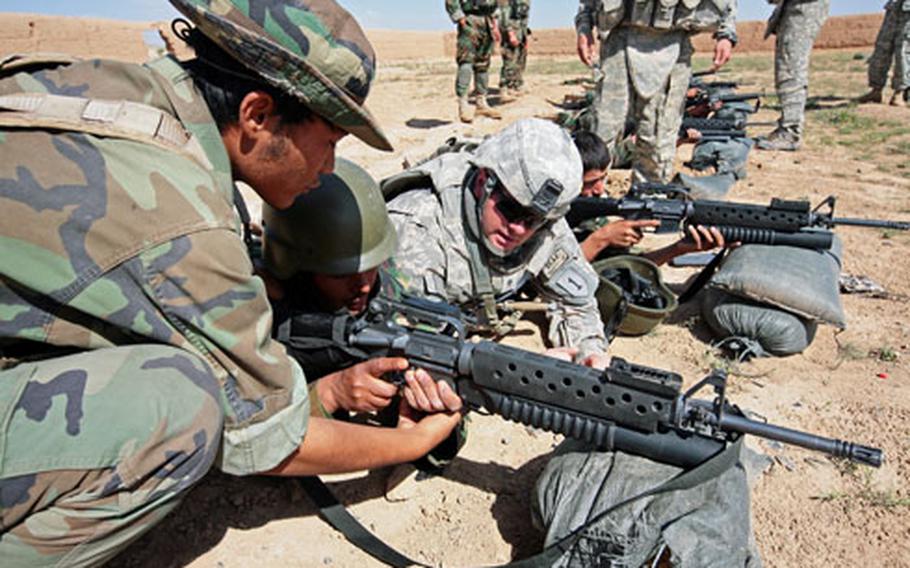 Spc. Michael Alfassa, 25, corrects an Afghan soldier’s grip during the training in Maiwand district, Kandahar province, Afghanistan. The U.S. soldiers are from Company D, 2nd Battalion, 2nd Infantry Regiment and are helping the Afghan army make the transition from Soviet-era weaponry to the rifles used by the U.S. Army. (Photos by Drew Brown/Stars and Stripes)

Spc. Michael Alfassa, 25, corrects an Afghan soldier’s grip during the training in Maiwand district, Kandahar province, Afghanistan. The U.S. soldiers are from Company D, 2nd Battalion, 2nd Infantry Regiment and are helping the Afghan army make the transition from Soviet-era weaponry to the rifles used by the U.S. Army. (Photos by Drew Brown/Stars and Stripes) 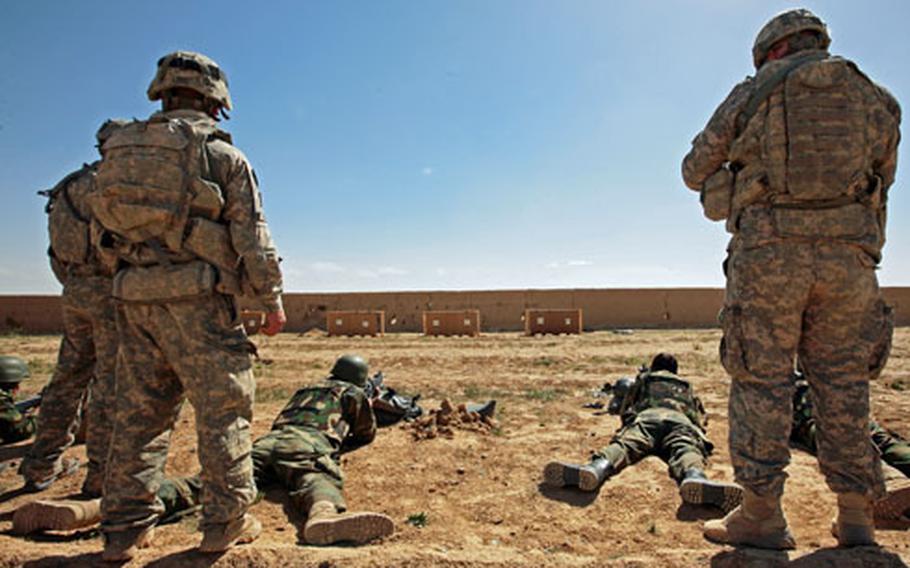 MAIWAND DISTRICT, Afghanistan &#8212; The Afghan troops stood haphazardly abreast, listening as Sgt. Tyler Bradley tried to explain to them the basics of shooting an M-16 rifle.

Another American soldier lay on the ground, his weapon resting on a sandbag, as Bradley lectured on the finer points of how the Afghans should position their bodies to keep their weapon steady.

A translator named Wafa rendered Bradley&#8217;s instructions into Dari, the lingua franca of the Afghan army, telling the troops to rest the barrel of the rifle on the sandbag, place their bodies in a straight line behind the weapon, and keep their feet spread and flat on the ground.

"Remember, when you breathe, there&#8217;s a natural pause in your breath," said Bradley, 23, of Stayton, Ore. "When your breath stops, that&#8217;s when you squeeze the trigger. The shot should come as a surprise to you."

Soldiers with Company D, 2nd Battalion, 2nd Infantry Regiment have been training and mentoring Afghan troops at a camp for the last two months.

Things went smoothly for the first group the Americans taught to shoot. They had a company of Afghan soldiers zeroed in on their rifles and qualified as basic marksmen within two days, said Lt. Col. Dan Hurlbut, commander of 2nd Battalion, 2nd Infantry Regiment.

Over the past couple of years, the U.S. government has been updating the Afghan army&#8217;s stocks of AK-47s and other Soviet-era weaponry with M-16 rifles and other American armament. But basic marksmanship training for many Afghan army units has been spotty.

"There were guys who&#8217;d never fired their weapons before," Hurlbut said.

As part of a new strategy intended to reverse the course of the war, which senior U.S. and NATO officials now describe as a "stalemate," President Barack Obama has ordered 4,000 more soldiers to Afghanistan to train the country&#8217;s army and police.

The first company of Afghans that the Company D soldiers trained were soon reassigned. It was evident Sunday that their replacements wouldn&#8217;t be so easy to deal with.

First, the Americans had to provide the bullets. The Afghans, who are always short on the most basic supplies, had been instructed by their commander not to waste their own ammo.

But when the Afghans started shooting, it became evident few of them had learned much from Bradley&#8217;s instruction.

Several Afghans insisted on shooting without the support of the sandbags. Many of them jerked the trigger, instead of squeezing it. The U.S. soldiers zeroed them as best they could, and if the Afghans got close to the center of the target, they figured that was good enough.

Then it became clear that many of the Afghans weren&#8217;t using their own rifles, which rendered any effort to get them zeroed mostly pointless.

In all fairness, the U.S. troops were trying to teach the Afghans in the space of an afternoon something that they&#8217;d taken days to learn themselves in training.

"It&#8217;d take a week of explaining to them how this stuff works," Bradley said.

Most of the Afghans at least managed to hit somewhere on the target, even if they got nowhere close to the center. A handful were pretty decent shots.

Arroyo turned to the Afghan soldier and congratulated him.

"Next time, use your own weapon, and I&#8217;ll put you here," he said, pointing to the middle of the target. A translator conveyed what Arroyo had said.