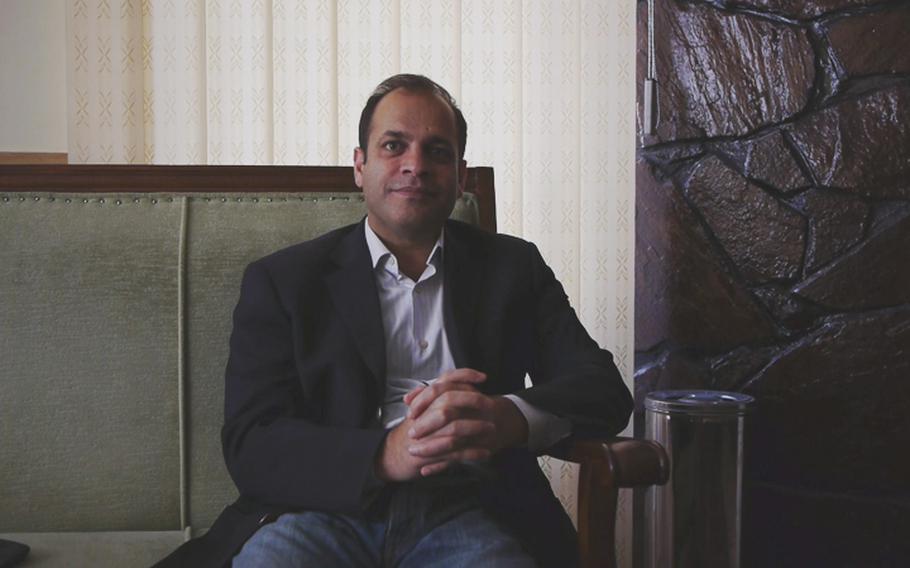 Buy Photo
Haroun Mir, a political analyst in Kabul, said the upcoming peace jirga largely amounted to a political maneuver by Afghan President Hamid Karzai as he seeks to reassert himself after a troubled election campaign and months of mounting international criticism. (Stars and Stripes)

KABUL &mdash; Delegates from across Afghanistan began converging on the capital this weekend for a conference designed to end a war that American and Afghan officials have long said cannot be won by fighting.

As U.S. troops prepared for a major operation in Kandahar and Taliban fighters launched a trio of brazen attacks a week and a half ago against some of the country&rsquo;s most heavily guarded spots, the news does not augur well for a peace process struggling to find footing.

&ldquo;This peace jirga is a nice idea, but really this is the wrong time,&rdquo; said Khalid Pahstoon, a member of parliament from Kandahar. &ldquo;On the one hand, the international forces are about to launch a big operation. On the other hand, the Taliban are not even participating because they believe they are already winning the war.&rdquo;

The Afghan government has sought to limit expectations for what it terms a &ldquo;consultative jirga,&rdquo; saying it represents only the beginning of a process. Some 1,500 delegates from across the country are expected to attend the three-day conference, ranging from members of parliament and provincial councils to tribal elders and religious leaders. Roughly 20 percent of the delegates are women. The Taliban was not invited, but sympathetic tribal leaders are expected to represent an indirect form of Taliban participation.

Diplomats from the U.S. and other countries have been invited to the opening ceremony, likely on Tuesday, but will not attend the jirga.

&ldquo;This is an Afghan process that has to take place in an Afghan setting,&rdquo; said NATO spokesman Tony White.

Organizers say they hope the jirga, which will center on two days of small-group discussions before reconvening to present recommendations, will help the government better understand the insurgency and identify how and with whom to negotiate.

&ldquo;This will be unlike earlier processes where we tried to negotiate, but we didn&rsquo;t know what mechanism to use or who to talk to,&rdquo; said Najib Amin, a lead organizer. &ldquo;We&rsquo;re hoping to learn ... how do we approach them, and what do they want.&rdquo;

That goal underscores just how embryonic the peace process remains, despite years of efforts to find a negotiated settlement. The ideas floated by the government ahead of the jirga largely hew to a familiar two-track strategy aimed at weaning low-level fighters from the insurgency with promises of jobs and money while hoping at least some &ldquo;reconcilable&rdquo; commanders can be persuaded to lay down their arms.

Few in Kabul expect that strategy to meet with any more success than it has in the past.

For one thing, programs to win over low-level fighters are expensive. During a January peace conference in London, Afghan President Hamid Karzai sought international funding for a $1 billion reintegration program that would provide jobs to fighters who broke with the insurgency. So far, donors have pledged about $160 million.

&ldquo;I don&rsquo;t know how President Karzai can convince the international community to pay for a project that would be fully under his control when there are so many concerns about corruption and he has really done nothing to address them,&rdquo; said Haroun Mir, who heads the Afghanistan Center for Research and Policy Studies in Kabul.

Mir said the focus should be on negotiations with insurgent leaders, who can draw on a deep recruiting pool and have kept up a steady campaign of threats and violence against anyone who accepts government money. But like others, Mir said those negotiations face long odds.

&ldquo;The Taliban already controls more than half the country,&rdquo; he said. &ldquo;If they are able to beat American and NATO forces, why should they abandon their position of strength and come down and negotiate with a government that is disliked not only by the Afghan people but which is criticized by the international community?&rdquo;

Senior U.S. officials, including Secretary of Defense Robert Gates, have said negotiations are unlikely to produce results as long as the Taliban believes the war is going their way &mdash; a view underpinning an American strategy aimed at breaking the insurgency&rsquo;s momentum and opening space for an acceptable peace deal.

Even those who believe some Taliban leaders might be amenable to making peace now say the process will first need to overcome a deep current of suspicion.

&ldquo;The main problem is that the Taliban does not trust the government,&rdquo; said Arsallah Rahmani, a former Taliban minister and now a member of parliament who has helped lead back-channel talks with the Taliban leadership in Pakistan. &ldquo;They believe they would not be safe if they made peace because there are still prices on them. Also, they don&rsquo;t want to negotiate with this government because they believe it is made by America.&rdquo;

The jirga has sparked new tensions within the Afghan government itself, which has been deadlocked by a series of disputes between Karzai and parliament. Some parliamentarians criticized Karzai for hand-picking the delegates to the jirga and said it was a poor representation of Afghan society.

&ldquo;The jirga was an effective mechanism 100 years ago, but why go back to 18th-century structures when we now have a parliament?&rdquo; said Fawzia Kufi, an MP from Badakhshan in northern Afghanistan. &ldquo;They&rsquo;re calling this the beginning of a process but, from my perspective, it&rsquo;s not a process. It&rsquo;s just a snapshot of a process which they show to make it look like there&rsquo;s a process.&rdquo;

Kufi said the Taliban&rsquo;s publicly stated demands, which include the withdrawal of Western troops and an overhaul of the Afghan government, are not acceptable.

The jirga also represents an effort by Karzai to cement a central role after months of withering international criticism and what was widely seen as a fraudulent election campaign, some observers said.

&ldquo;He&rsquo;s trying to show leadership and re-establish his legitimacy,&rdquo; said Wahid Muzhda, an author and journalist. &ldquo;It&rsquo;s also designed to pressure the Americans, to show that he is proceeding on his own path whether or not the Americans are committed to him.&rdquo; Muzhda said Karzai&rsquo;s warm welcome in Washington earlier this month, an abrupt about-face by the Obama administration, showed that the tactic might be working.

Others said Karzai&rsquo;s stance goes beyond a short-term strategy for confronting U.S. criticism and was, at least in part, about his long-term survival.

&ldquo;He is not convinced that NATO and in particular the U.S. military will be able to defeat the Taliban, so he&rsquo;s thinking ahead,&rdquo; Mir said. &ldquo;He wants to extend this olive branch to the Taliban while he is still in a position of relative strength so that if the U.S. is unsuccessful and he is forced to make peace later, at least he can say he was willing to make peace now.&rdquo;