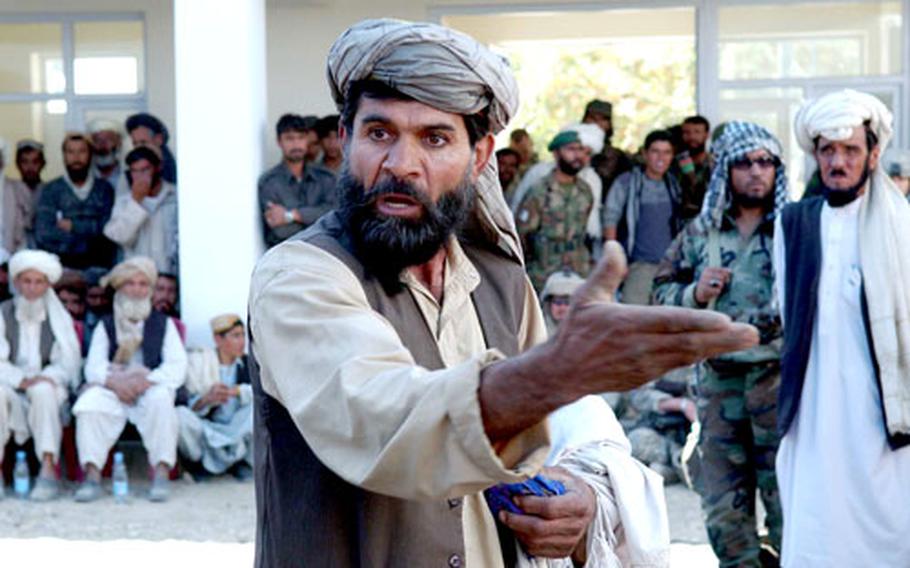 Daulat Khan complains bitterly about the local police during a shura, or meeting, held in Miri, Afghanistan on Sunday. (Michael Abrams / S&S)

Daulat Khan complains bitterly about the local police during a shura, or meeting, held in Miri, Afghanistan on Sunday. (Michael Abrams / S&S) 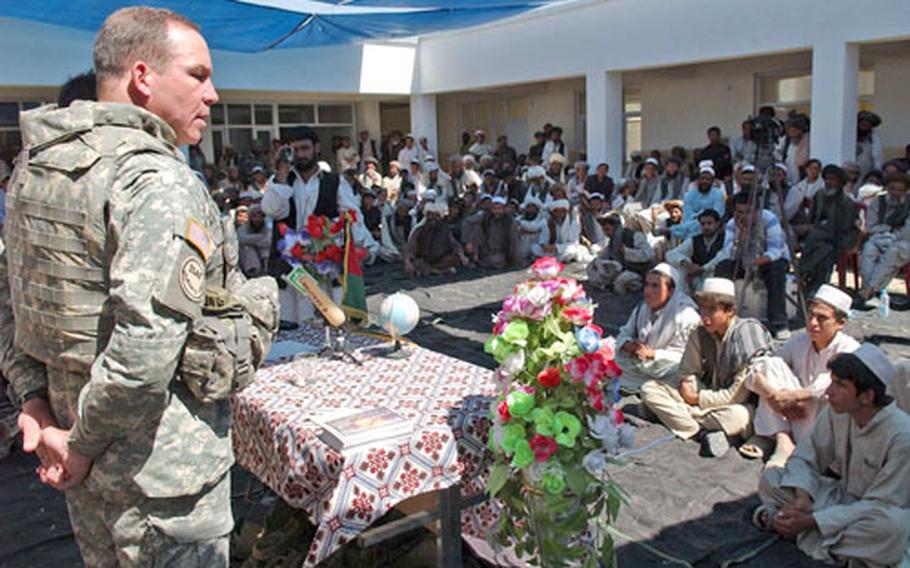 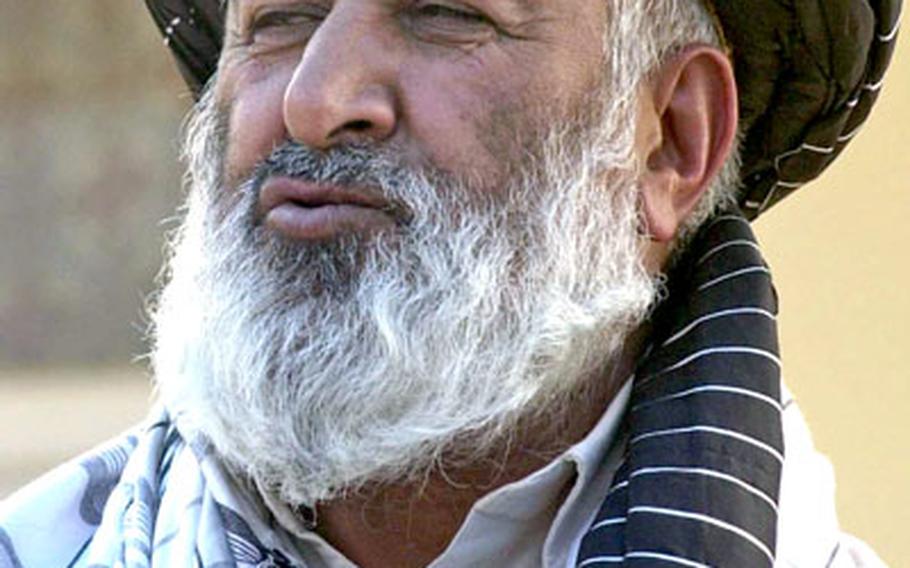 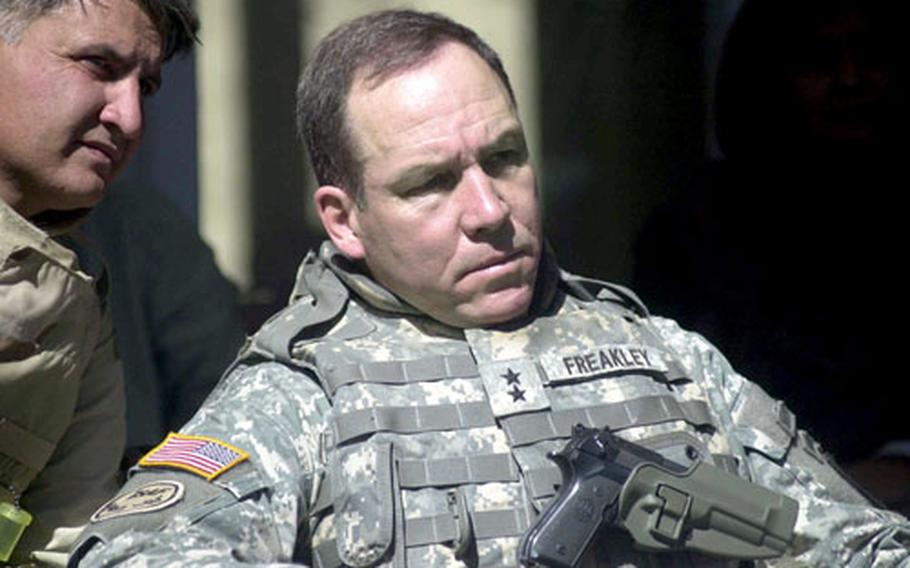 Maj. Gen. Benjamin C. Freakley listens through an interpreter to what is being said at the shura. (Michael Abrams / S&S) 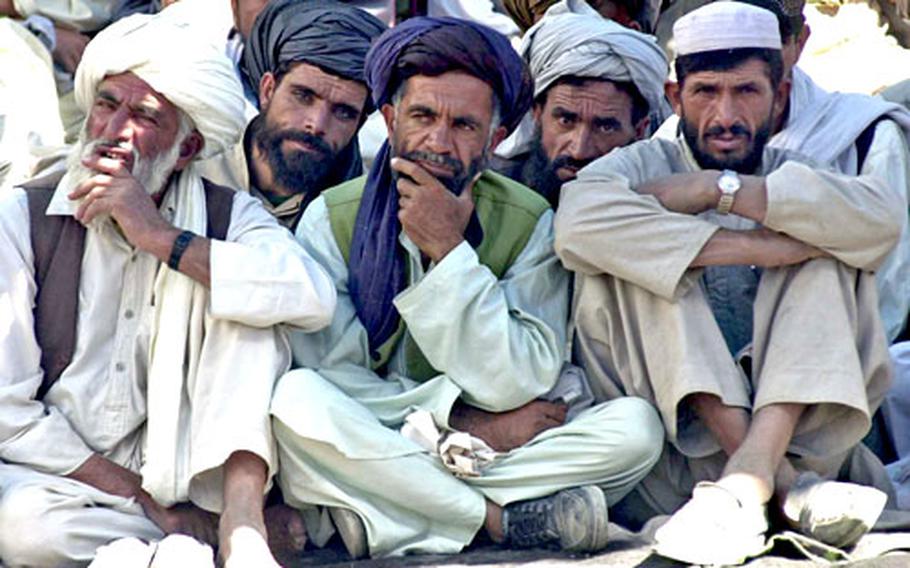 Local men listen during the shura, or meeting, held at the government compound in Miri, Afghanistan on Sunday. (Michael Abrams / S&S)

ANDAR DISTRICT, Afghanistan &#8212; Of the couple of hundred men at the shura, among the square-jawed U.S. soldiers and the Army general and all the former mujahedeen who&#8217;d once fought the Soviets and were now old men, the unlikely hero of the day was an outraged local man who interrupted the governor.

The police were supposed to bring security, the man yelled, but instead they robbed and harassed the people. He glared at the police sitting in front of him, said they had a corrupt commander and helped the Taliban.

U.S. commanders agreed as well, and because of what the man, identified as Daulat Khan, said, things happened.

On Sunday, as the shura, or meeting, ended, all 70 of the Afghan National Police &#8212; whom U.S. troops found when they entered Miri last week holed up inside a decrepit fortress after Taliban fighters threatened to kill them and their families &#8212; were sent packing.

They were immediately moved elsewhere to prevent reprisals against the local people, according to Col. John Nicholson, commander of Task Force Spartan and the 3rd Brigade, 10th Mountain Division.

New police that were better trained and more disciplined, it was hoped, would be brought in to replace them, joining Afghan army troops and U.S. troops that moved into the Andar District last week to confront Taliban fighters who&#8217;d preceded them.

The shura, organized by the Provincial Reconstruction Team based in Ghazni city, was the culmination of one part of Operation Mountain Fury, the latest U.S. offensive that was to include both combat and stability operations in the eastern part of the country.

The district, in the strategically important Ghazni province, had been largely without a U.S. military presence, suffered under bad policing and government, and seen little progress, U.S. officials said.

That vacuum had been filled over the past few months by Taliban, who&#8217;d moved in from the Pakistan border after encountering a heavy force there of Afghan and U.S. soldiers, according to Maj. Gen. Ben Freakley, operational commander of U.S. and NATO forces in Afghanistan.

The elders at the shura said Taliban had been there, were everywhere. But a task force consisting primarily of soldiers from the 2nd Battalion, 87th Infantry Regiment found little resistance as they moved a convoy of some 70 vehicles into the area from their base in Paktika.

The battalion entered early in the morning, with no shots fired, despite anticipation of enemy contact. Lt. Col. Chris Toner, battalion commander, who had said before the mission began that insurgents would fight, flee or blend back into the population, believed the fighters had fled into the mountains.

A partial solution for Ghazni was to encourage and enable local men to join the police, then get them training. Freakley said the province&#8217;s men hadn&#8217;t joined up in part because they didn&#8217;t want to go to a training center in another province. So possibly, he said, a training center would be built in the area.

After securing the town &#8212; where the women and few girls were rarely seen, men stayed to themselves and stared, and large groups of boys gathered constantly to ask for pens and radios &#8212; some soldiers went out on patrols.

Others took on the task of cleaning up a new district center that was built last year by the U.S. but never outfitted with furniture or staff and was unused, except by the sub-governor.

Although Toner was supposed to provide security, he decided to provide more. He hired some 40 local men to help in a two-day, pre-shura cleanup, put up Hesco blast walls and install a 60-foot flagpole in front of the district center.

He met with an Afghan general and recommended that a local Afghan army commander be replaced after a dispute in which the army and police almost opened fire on each other, and after he reportedly declined to go after Taliban fighters. The Afghan general told Toner that the commander would not only be replaced, but arrested.

The district chief also lost his job, although he retained his freedom. He was replaced Sunday by someone appointed by the governor.

But the anger and frustration of the men at the shura were evident.