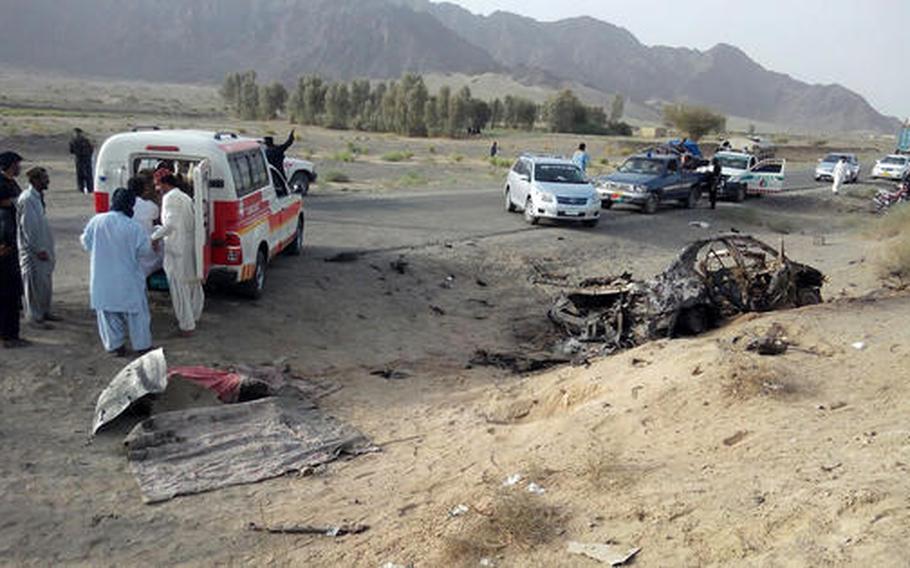 This photo taken by freelance photographer Abdul Malik on Saturday, May 21, 2016, purports to show volunteers standing near the wreckage of the destroyed vehicle, in which Mullah Mohammad Akhtar Mansour was allegedly traveling in the Ahmed Wal area in Baluchistan province of Pakistan, near the Afghanistan border. A senior commander of the Afghan Taliban confirmed on Sunday that the extremist group's leader, Mullah Mohammad Akhtar Mansour, has been killed in a U.S. drone strike. Afghan officials say another Taliban leader — known only as “Muzamil" — was killed on Tuesday, May 24, 2016. (Abdul Malik/AP)

KABUL, Afghanistan — The Taliban’s “shadow governor” in southern Helmand province was killed in an airstrike, Afghan authorities announced Tuesday, but the insurgents immediately denied the report.

Known by his nom de guerre “Muzamil,” the man was seriously wounded in the strike on Monday and later died of his injuries, Helmand province police chief Aqa Noor Keentoz said. Several other Taliban fighters also were killed in the bombing, he said.

The airstrike came as the insurgents were said to be picking a new leader following the death of Mullah Muhammad Akhtar Mansour in a drone strike along the Afghanistan-Pakistan border on Saturday.

Keentoz said the strike, conducted by Afghan forces, was carried out in the Marjah district, where government forces have been fighting to wrest control from the Taliban.

In a statement posted online, the Taliban claimed that their governor for Helmand was Haji Mullah Abdulmanan Akhund and that Muzamil is his deputy. They also said none of their officials in the province has been harmed.

The insurgents have “shadow governors” for all of Afghanistan’s 34 provinces, but rarely reveal the names for security reasons. They routinely deny reports that top officials have been harmed or killed.

Helmand province, where nearly 1,000 American, British and other international troops died during the 15-year war, has traditionally been a stronghold for the Taliban. Since the U.S. and international forces withdrew, militants have overrun large swaths of the province.

NATO officials have said recently that they expect Helmand to be the site of the next major Taliban offensive following a lull in fighting in April when insurgent fighters laid down their weapons to harvest opium — the Taliban’s main source of revenue — from the abundant poppies there.

Elsewhere, in southern Afghanistan, a roadside bomb killed at least four civilians and wounded five others traveling in a minivan in Kandahar province early Tuesday morning. The blast occurred in the Shah Wali Kot district at around 7 a.m., a government spokesman said.