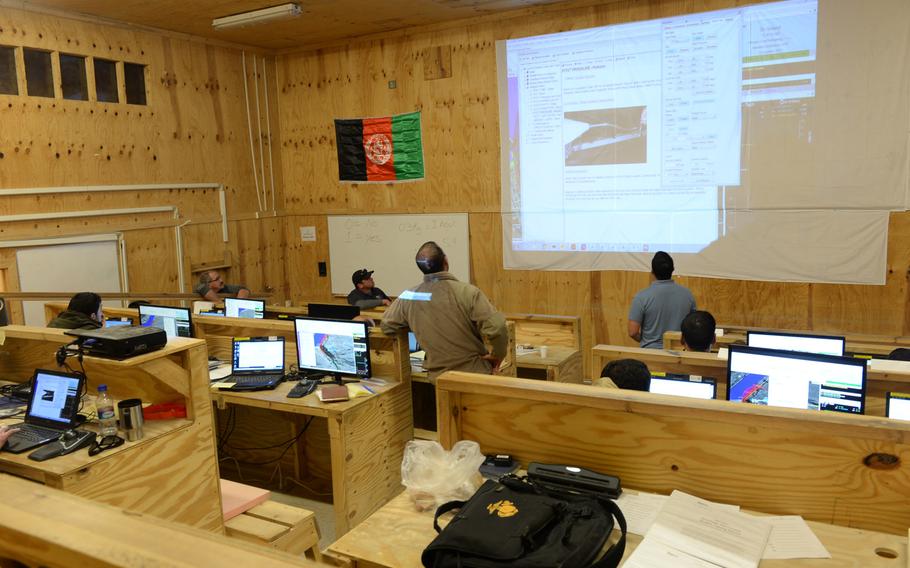 Instructors employed by Insitu, a Boeing subsidiary, teach trainee Afghan drone pilots how to operate ScanEagle unmanned aerial vehicles at a school outside the city of Mazar-e-Sharif on Wednesday, Oct. 26, 2016. The Afghans are currently setting up their first surveillance drone program. ()

Instructors employed by Insitu, a Boeing subsidiary, teach trainee Afghan drone pilots how to operate ScanEagle unmanned aerial vehicles at a school outside the city of Mazar-e-Sharif on Wednesday, Oct. 26, 2016. The Afghans are currently setting up their first surveillance drone program. () 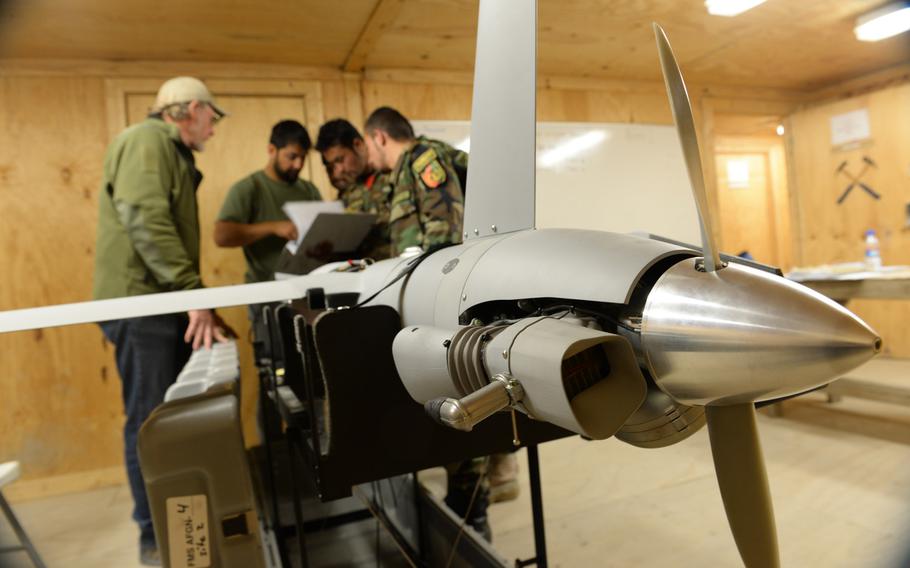 Buy Photo
Trainee maintainers check a manual on the ScanEagle unmanned aerial vehicle at a school outside the city of Mazar-e-Sharif on Wednesday, Oct. 26, 2016. (Phillip Walter Wellman/Stars and Stripes) 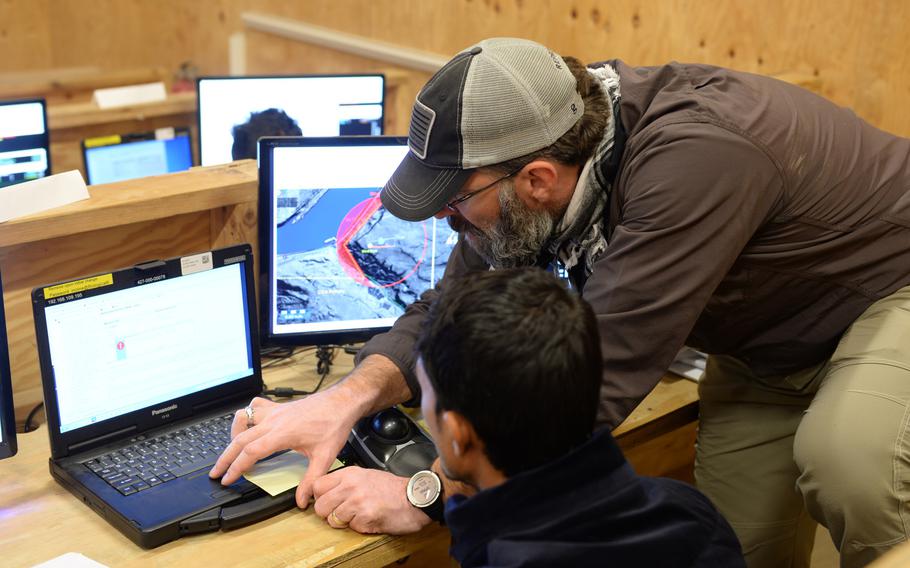 Buy Photo
ScanEagle instructor Chris Schoenen helps a student who is training to become a surveillance drone pilots at a school outside the city of Mazar-e-Sharif on Wednesday, Oct. 26, 2016. (Phillip Walter Wellman/Stars and Stripes) 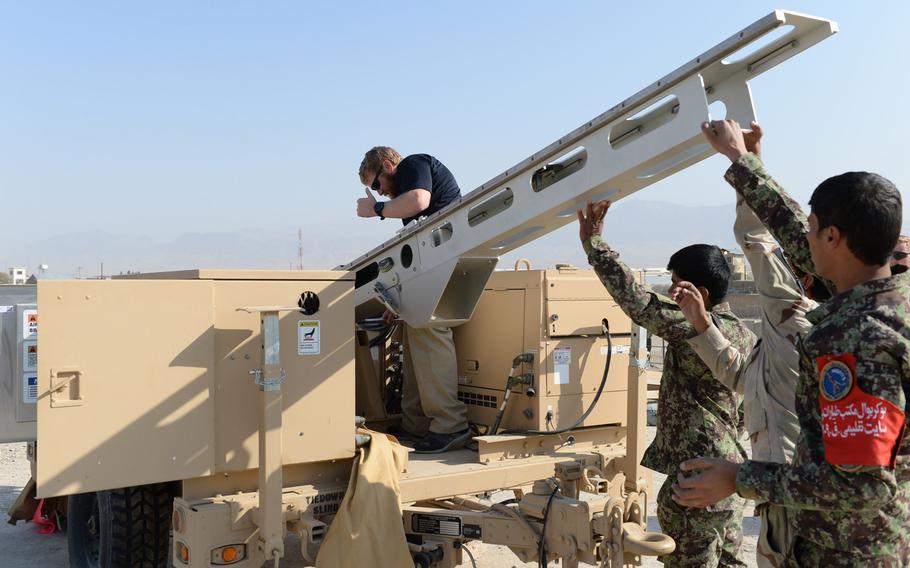 Buy Photo
Instructor Cody Cavender helps set up the ScanEagle drone launcher outside a training center near the city of Mazar-e-Sharif on Wednesday, Oct. 26, 2016. (Phillip Walter Wellman/Stars and Stripes)

CAMP SHAHEEN, Afghanistan — Inside a two-story schoolhouse on this Afghan military base near the northern town of Mazar-e-Sharif, several students are training to become part of the country’s first surveillance drone program.

Afghan forces rely heavily on international forces for their air surveillance and reconnaissance, but Afghanistan’s military and its foreign backers hope that a new fleet of Afghan-owned-and-operated ScanEagle unmanned aerial vehicles will allow them to acquire more battlefield intelligence themselves and become less dependent on foreign forces.

“We’re training the Afghans to take over this mission on their own,” said Ben Meyle, 31, a former Army sergeant with the 303rd Cavalry Regiment, who supervises the ScanEagle instruction. “Right now we do a lot of the (surveillance) missions here in Afghanistan and we want to see the Afghans take over their own country.”

Afghan forces currently use manned Pilatus PC-12 planes to conduct surveillance missions, but they are planning to expand their intelligence gathering capabilities, especially in light of a recent surge in Taliban activity that has given the insurgents control of more territory than at any time since a U.S.-led invasion ousted them from power in 2001.

“The government of Afghanistan recognizes the need for better intelligence to enable it to secure the nation against the constant insurgent threat,” said U.S. Air Force Maj. Robert Faith, who advises the Afghan military on the ScanEagle program. “The ScanEagle was selected over additional manned aircraft and other unmanned aircraft systems based on its capabilities, cost and sustainability.”

The ScanEagle school opened in April after nearly a year of planning. The first class of students graduated in October. A small cadre of Afghan officers and noncommissioned officers manages the school, while American contractors employed by Insitu — a subsidiary of aviation giant Boeing — provide the instruction.

All of the students here come from the Afghan National Defense and Security Forces. The current class consists of 10 trainee pilots; four trainee maintainers, who perform maintenance on the drones and the equipment needed to fly them; and six students training to become mission coordinators and analysts, who ensure the aircraft fly over the right targets and analyze the images collected.

Scores of qualified servicemembers are needed in all of these roles for the Afghans to maintain an indigenous surveillance drone program to cover the country’s most contested areas.

There are plans for at least one ScanEagle detachment to be built into each of the Afghan army’s six regional corps. Each will provide surveillance of conflict areas and be able to operate sophisticated cameras in day and night operations.

The first detachment is already operating in the restive southern province of Helmand. The ScanEagle school’s first group of graduates is there providing real-time intelligence to the ANA’s 215th Corps under the advice of Insitu contractors, who have all previously operated coalition ScanEagle sites around Afghanistan.

While the Afghans oversee and operate the flights, operations in Helmand and at future ScanEagle detachments will continue to function under the advice of U.S. military personnel and international contractors until the Afghans are able to confidently run the program on their own, officials said.

ScanEagle unmanned aircraft systems are equipped with high-definition and infrared cameras that can produce live video feeds. The aircraft, with a wingspan of about 10 feet, can stay airborne for up to 24 hours at an altitude of 15,000 feet. Each costs about $100,000.

“It’s really effective,” said Cody Cavender, 35, a former Army sergeant who trains maintainers at the ScanEagle school. “The camera has really good optics for its size, and it can provide the Afghans with a lot more situational awareness of what’s going on around them without necessarily putting people in harm’s way.”

But for the drones to be effective, the people operating them must become experts at what they are doing. And, according to the instructors, training Afghan students to use this high-tech equipment has been challenging.

“The majority of the students haven’t had a lot of exposure to computer systems or laptops and such, so teaching them the technology, you kind of have to stand back and think, ‘How deep do I need to go so that they’re confident?’” said Patrick Foley, 62, who retired from the Navy in 1994 and has been working for Insitu for more than eight years.

Patrick said some of the Afghan troops learning how to become drone maintainers had never used tools before they came to the school.

“Back home everybody grew up either working on a bicycle or working on a car or a motorcycle or something like that. That’s not the norm here,” he said. “So getting people to understand the basic concept of tools, that’s a challenge.”

Another challenge is that many of the students aren’t fluent in English, the language in which the ScanEagle manuals are written and classes are held. Constant support from interpreters is required. For all of these reasons, the training in Afghanistan takes about three times longer than it would in the United States.

Organizers are optimistic that qualified Afghans will be operating ScanEagle detachments in all regions of the country within the next three years. That’s important, they say, because of uncertainty over future international troop numbers.

Most foreign forces left Afghanistan at the end of 2014, when NATO’s combat operations ended and was replaced by a training and advising mission. There are currently about 13,000 NATO troop in Afghanistan, of which nearly 7,000 are American. About 3,000 other American troops are in the country on a separate counterterrorism mission.

NATO Secretary-General Jens Stoltenberg said in July that coalition troop levels in 2017 would remain at about the same level as they are now, but those numbers could change. The goal is to keep supporting Afghan forces until they are self-sufficient. One of their biggest weaknesses has been in air power.

“They’ve already lost a lot of support, so the more support they use from the multinational forces, they’re going to need something to offset that, so this will help out,” said Kristen Kokkeby, 37, a former Army sergeant with the 501st Military Intelligence Brigade, who is training pilots at the ScanEagle school.

But the ScanEagle program will help Afghan forces become self-sufficient only if other areas of the military are improved, Kokkeby said.

“To me this is just a very small piece of the whole pie,” he said. “You got to build the rest of the pie, too, in order to make it work, because if you don’t have the other pieces then it’s just an expensive asset that’s flying around,” he said.