Afghanistan working toward some semblance of gender equality 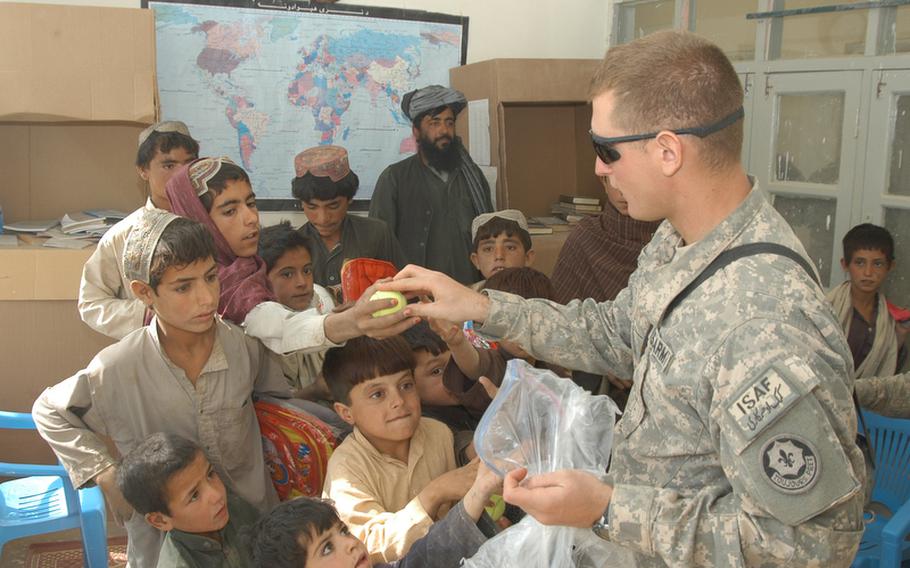 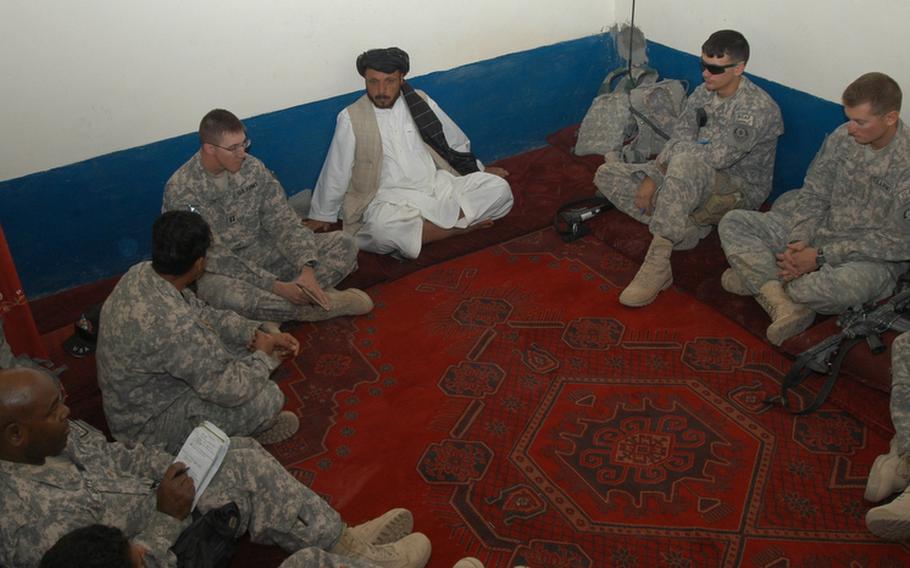 Buy Photo
U.S. soldiers meet with Sahib Jan, an Afghan Highway Police commander and the most powerful man in Robat, a village in southern Afghanistan. Jan asked for more fuel for this patrols and roadside checkpoints. Soldiers said they would be bringing winter coats and other cold-weather gear for Jan's men, but stressed that the Afghans have to do a better job of tracking such things because new coats will not be handed out every year. (Jon Rabiroff/Stars and Stripes) 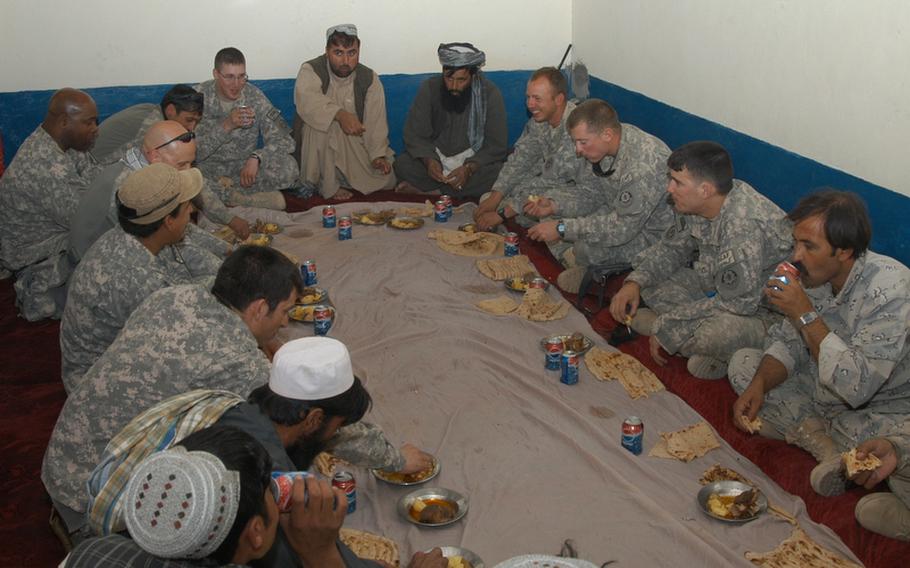 Buy Photo
U.S. soldiers, Afghan Highway Police and residents of Robat, a village in southern Afghanistan, share a sheep meal. The flat bread served with the meal was prepared by female U.S. soldiers who were shown how to make it by some of the Afghan women of the village. (Jon Rabiroff/Stars and Stripes) 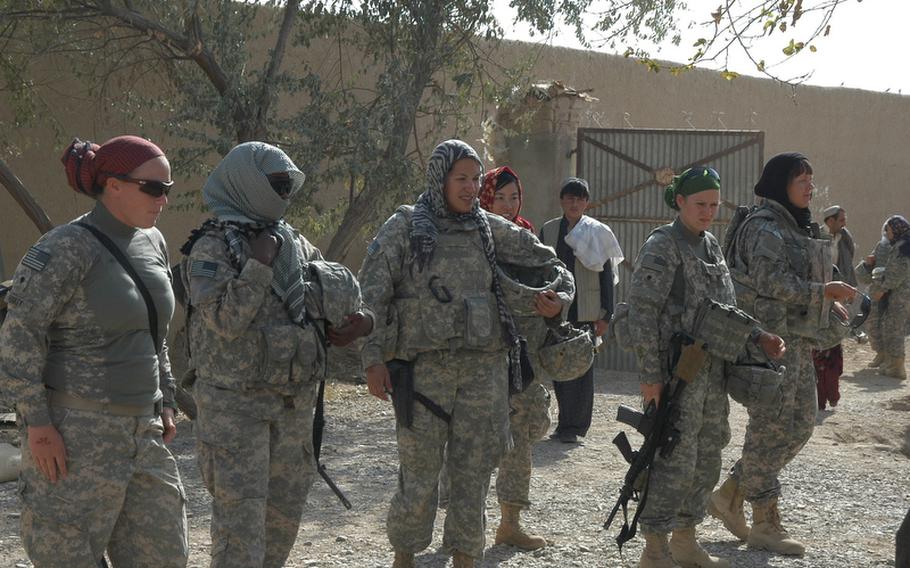 Buy Photo
Members of the 4th Squadron, 2nd Stryker Cavalry Regiment Headquarters Troop's Female Engagement Team, and a few female volunteers, emerge after being shown how to make flat bread by some of the Afghan women in the village of Robat, in southern Afghanistan. The American women used the opportunity to ask the village women about their needs. (Jon Rabiroff/Stars and Stripes) 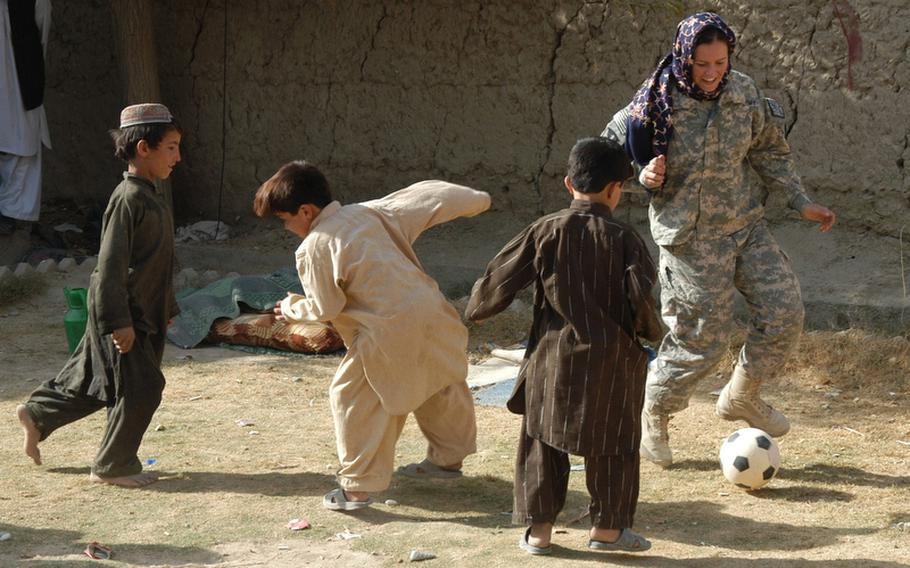 Buy Photo
Second Lt. Randy Wintermantel plays soccer with some of the children of Robat, a village in southern Afghanistan, during a recent visit by U.S. soldiers. The soldiers handed out book bags in the nearby school, and female soldiers were shown how to make flat bread by some of the Afghan women of Robat. (Jon Rabiroff/Stars and Stripes) 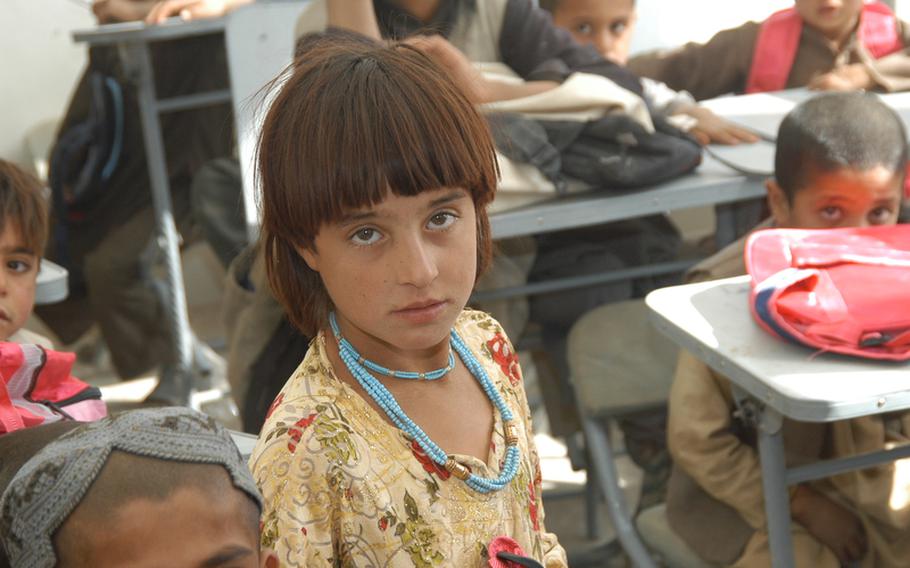 Buy Photo
A girl stands in the middle of a classroom in Robat, Afghanistan, where she studies alongside boys, thanks to the relative security of the area. The Taliban believe the education of females is against the teachings of Islam and has bombed and burned hundreds of schools in recent years for teaching girls. (Jon Rabiroff/Stars and Stripes) 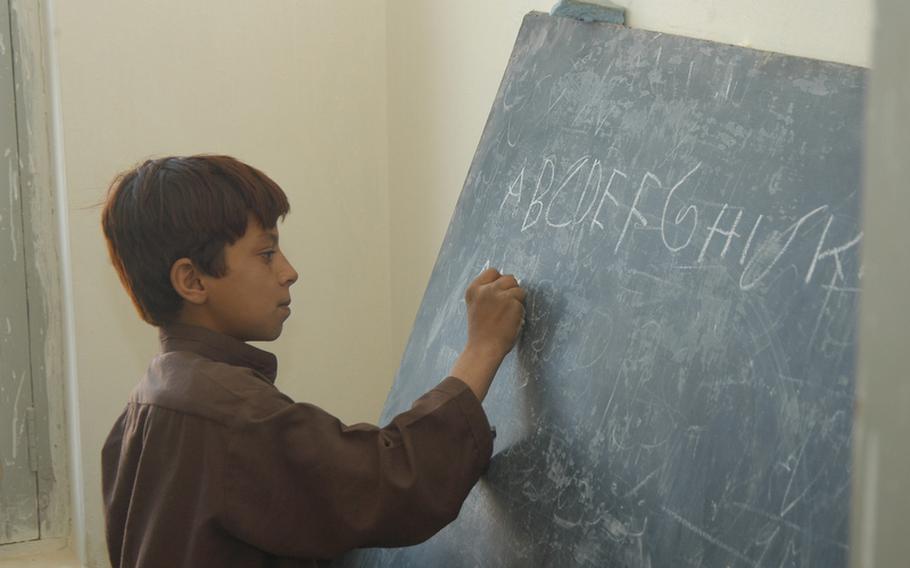 Buy Photo
A student in Robat, in southern Afghanistan, shows visiting U.S. soldiers how he can write out the English alphabet. Sahib Jan, the most powerful man in the remote village, said in order for a Afghan community to provide education for its children, there must first be security. (Jon Rabiroff/Stars and Stripes) 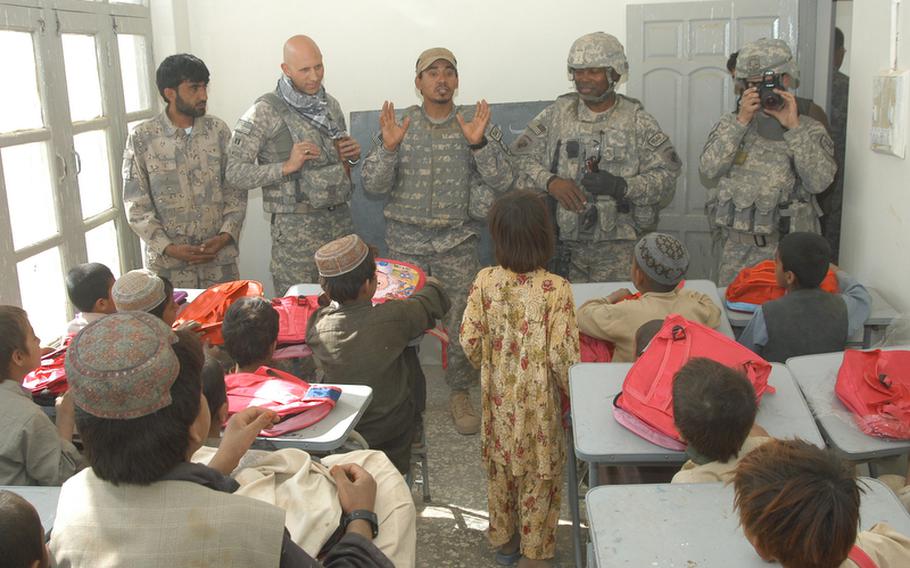 Buy Photo
U.S. soldiers and a member of the Afghan Highway Police take questions from students at a school in Robat in southern Afghanistan during a recent visit, during which book bags were handed out to all the children. (Jon Rabiroff/Stars and Stripes) 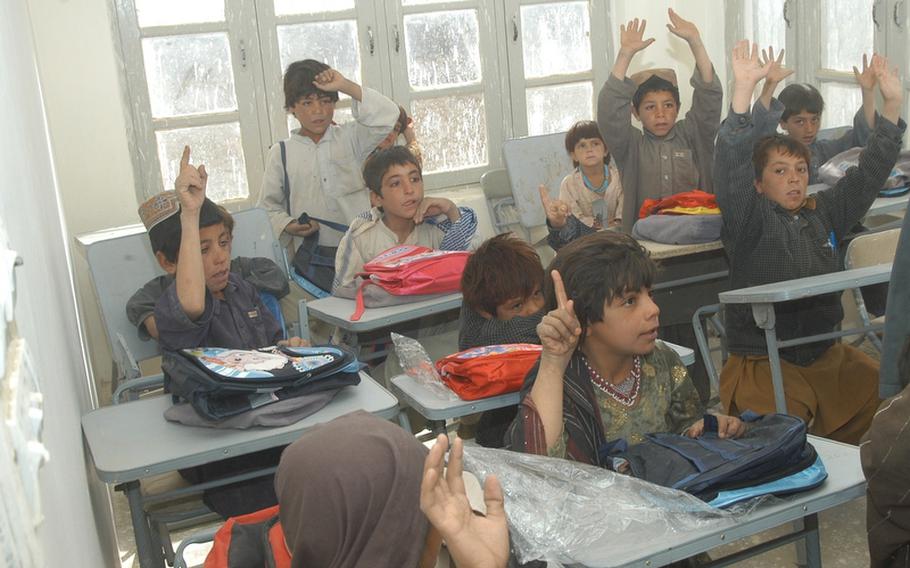 Buy Photo
Students at a school in Robat, Afghanistan, raise their hands during a session with visiting U.S. soldiers. There are about 15 girls in the school, at least two of which can be seen in this class. (Jon Rabiroff/Stars and Stripes)

ROBAT, Afghanistan &mdash; In this remote Afghan village, the distance between the school and the compound of its most powerful resident is 100 yards, and thousands of years.

At the school, about 15 girls attend classes alongside dozens of boys thanks to the relative security of the area, which means the Taliban cannot act on its opposition to the education of females, a conviction that has led to the burning or bombing of hundreds of schools in recent years.

Down the road, at the home of the affable Sahib Jan &mdash; the local Afghan Highway Police commander and most respected village elder &mdash; the local women are kept out of sight of visiting U.S. soldiers, preparing a meal for men with whom they are not allowed to eat. Female soldiers are not even welcome to sit in on a meeting of the military contingent, Jan and his subordinates.

&ldquo;To me, the girls and the boys are the same,&rdquo; Jan said through an interpreter during the meeting. &ldquo;We would like to provide an education for both of them,&rdquo; although Jan would prefer that happen in separate schools, or separate classrooms. &ldquo;They can become whatever they want to when they grow up.&rdquo;

That said, when boys are born, &ldquo;there is celebration,&rdquo; he said. &ldquo;When a daughter is born, we are not that happy.&rdquo;

While Jan says the genders are equal, his views on what equal means are quite different from the Western way: &ldquo;In our culture, men and women are not supposed to be together.&rdquo;

That is just one example of the religious, moral and cultural differences that U.S. and coalition officials must accept as they continue their mission in Afghanistan &mdash; that no matter how much Western-style government, political and military influence they wield here, anything approaching equality for women is still generations away &mdash; if it happens at all.

&ldquo;It saddens me to go to a culture and know, at this point in time, they&rsquo;re not afforded the same rights,&rdquo; said Army Spc. Tiffany Hall &mdash; a member of the Female Engagement Team for the 4th Squadron, 2nd Stryker Cavalry Regiment&rsquo;s Headquarters Troop.

&ldquo;Maybe one day we&rsquo;ll get there, but I know that day is not today. We&rsquo;re doing multiple things to help the community ... better its living situation and get out from under the Taliban foothold. Until we can help that aspect first, we can&rsquo;t concentrate on getting the equal rights that we would want.

&ldquo;We have to do one step at a time. It&rsquo;s a process.&rdquo;

On a recent Saturday, a contingent of soldiers from the 4th Squadron&rsquo;s K and Headquarters troops ventured from the base at Spin Boldak to Robat &mdash; a village of about 10,000 south of Kandahar in southern Afghanistan &mdash; for what they believed would be an unprecedented opportunity to spread goodwill in the area and get access to a number of the normally cloistered women of the community.

First stop was the sparsely appointed school, where soldiers and Afghan Highway Police officers handed out book bags to the dust-covered children. The soldiers answered questions from the students in a couple classrooms, the most interesting of which was why squadron chaplain Capt. Joe Duwors shaves his head. When he confessed that he did not have much on the top of his head, a student suggested he still had enough on the sides to let it grow.

Duwors then started to explain through an interpreter that the U.S. military was there to support the government of Afghanistan, but cut his speech short when another soldier pointed out the children were no longer paying attention.

The soldiers then dropped off soccer and tennis balls with the school&rsquo;s headmaster, Fazal Rehman, who thanked the group and said, &ldquo;Our children are so happy. They will be learning well.&rdquo;

Asked about the girls in the school, he said, &ldquo;They come for an education. They want to learn. They want to write the future of Afghanistan.&rdquo;

The group then walked down the road to Jan&rsquo;s compound, where an offhand remark the week before had set the stage for an unusual cultural exchange. One of the soldiers commented on the flat bread that was served, prompting one of the villagers to invite the unit to bring its female soldiers back so the local women could teach them how to make bread, thus helping them land husbands.

So members of the Female Engagement Team and a few other volunteers disappeared through a gate and out of sight of the men, hoping to learn a little about breadmaking, and as much as possible about the local culture as seen through the shrouded eyes of about a dozen of the village women.

Referring to the cooking lesson, 2nd Lt. Randy Wintermantel, one of the vounteers, said, &ldquo;It is a kind of Susie Homemaker for me, but hey &mdash; if that&rsquo;s how it gets done, why not?

&ldquo;That part is probably the hardest for me. You&rsquo;re a female soldier and you expect to do the same thing the guys do. But, you have to understand that&rsquo;s the culture here.&rdquo;

Female Engagement Teams have been started all over Afghanistan in recent months, to reach out to women who are forbidden to interact with male soldiers.

&ldquo;There&rsquo;s a whole lot of needs for them that maybe we&rsquo;re not heeding because we&rsquo;ve never been able to interact with them,&rdquo; Wintermantel said.

Hall said communication was awkward at first, but things loosened up when the female soldiers tried to follow directions on how to spread dough on a very large pan.

&ldquo;There was a lot of laughing as we attempted to do it without making holes ... and there were a lot of holes,&rdquo; she said.

After teaching the soldiers how to prepare vegetables, the Afghan women retired briefly to prepare the meat for the meal. The women then sat down to eat with the female soldiers in one part of the compound, and children carried plates of food to the men in another area.

The local women were most interested in which soldiers were married and had children, Hall said. They also asked whether the soldiers knew how to fire their weapons.

Hall said the women told her that transportation to hospitals is an issue for the village residents, because the closest facilities are about 25 miles away, in Spin Boldak or Kandahar. Dental care, she was told, is virtually nowhere to be found.

Eventually, the younger women and girls brought out henna supplies and painted tattoos on the hands of some of the soldiers.

&ldquo;It was really heartwarming to see that they would reach out to us and try to introduce us to some of their culture,&rdquo; Hall said. &ldquo;The fact that they see us both as a soldier and a wife someday &hellip; it was really touching.&rdquo;

On the other side of compound, the male soldiers told Jan what they could bring his men in the way of supplies for the winter, but they urged him to get some of what he needed from the applicable Afghan government agencies.

Jan said, &ldquo;I control the whole area with the people helping me,&rdquo; including the &ldquo;very, very hard-working women&rdquo; of the village who cook and raise the children.