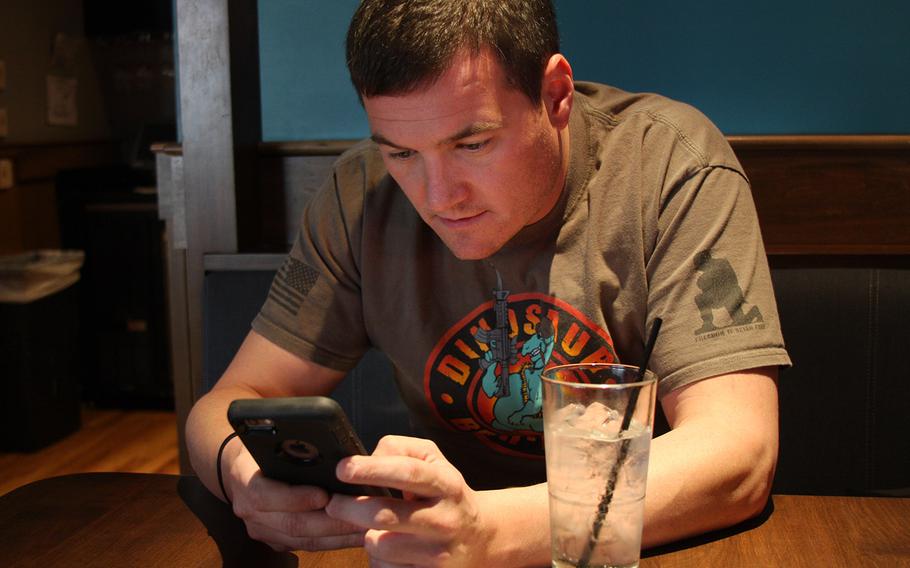 Matt Zeller, a former U.S. Army intelligence officer whose interpreter saved his life by shooting two Taliban during a firefight, coordinates furniture and clothing deliveries for former interpreters recently arrived to the U.S. Zeller is the founder of No One Left Behind, a non-profit group that helps former Afghan and Iraqi interpreters get to the U.S. and find jobs and housing once there. (Heath Druzin/Stars and Stripes)

Matt Zeller is still here because of his Afghan interpreter.

The former Army captain is alive because an Afghan he didn’t know risked his life to shoot and kill two insurgents who were sneaking up on Zeller in the midst of withering rifle fire.

That interpreter was Janis Shinwari and the incident sparked a deep friendship that led Zeller to help Shinwari immigrate to the United States when the interpreter’s work with Americans made him a prime Taliban target. When Shinwari arrived at Dulles airport with his wife and two small children, Zeller was there to greet him.

After an emotional reunion, Zeller pointed to the four small carry-on bags the family carried between them.

“I said, ‘Let’s go get the rest of your luggage,’ and that’s when I realized that was all they were allowed to bring,” Zeller recalled. “I realized he’s going to be homeless if I don’t do something.”

Former U.S. military and government interpreters from Afghanistan and Iraq face plenty of hurdles getting a Special Immigrant Visa, which was created to give those under threat for their service safe passage to America. Many wait years for the visa due to red tape and an agonizing security vetting process.

But those who do get their visa often arrive in America with no job, no housing and no one to shepherd them through the dizzying transition.

The same day Zeller met the man he calls his brother at the airport, he started a GoFundMe campaign to help Shinwari. He raised $35,000 in 72 hours, mostly from strangers.

But when he tried to give the money to Shinwari, he balked. What about all of the other interpreters who needed help, he asked.

So Zeller and Shinwari took that seed money and started No One Left Behind. What started as a two-man operation in 2013 has now resettled well over 1,500 interpreters and family members and is operating in eight cities across the country, and plans to open in Houston and Sacramento in the coming months.

He estimates the current U.S. cap of 7,000 Afghan interpreters who can receive Special Immigrant Visas is 5,000 too few and says more needs to be done for interpreters once they arrive in the U.S.

“If we fail to take care of these people it’s as inexcusable and as awful as it would be to knowingly leave behind an American servicemember,” Zeller said.

No One Left Behind helps interpreters navigate the Byzantine visa process and when interpreters reach the U.S. they are there to offer assistance finding housing, job placement, furniture and a car.

Each weekend, legions of volunteers, many of them former interpreters settled in the U.S., crisscross the DC metro area, where the non-profit group is based, picking up donated furniture and clothes and dropping them off at apartment complexes where newly arrived interpreters are starting new lives.

Shinwari is often one of them.

“It’s like if you get a bird from his cage and free it,” he said about reaching the United States after years of Taliban threats. “When I was back (in Afghanistan) I was worried about my children and their future. Now we are safe and we are here to help other translators.”

For more information on No One Left Behind, visit www.nooneleft.org