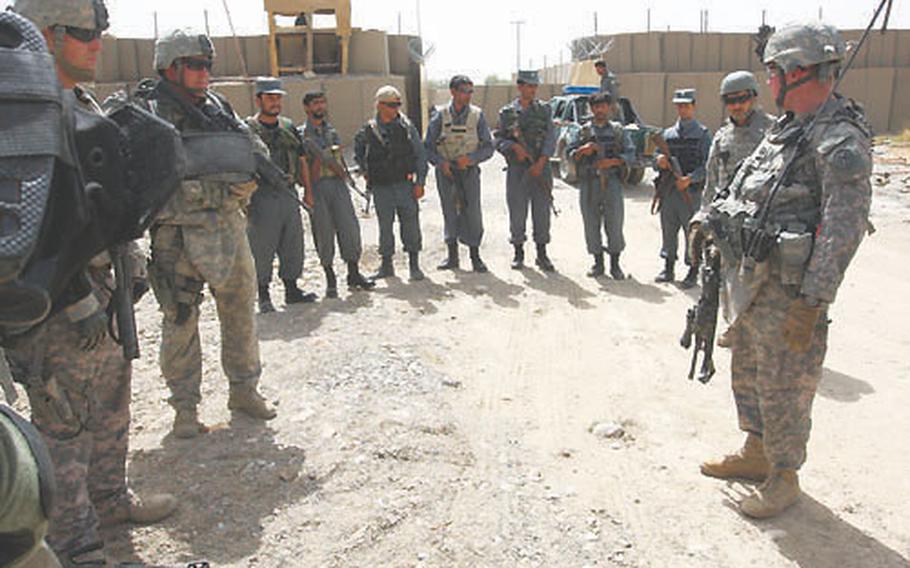 KANDAHAR, Afghanistan &#8212; U.S. units training police in southern Afghanistan endorsed a plan that would put all American troops under a single command but warned that a proposal to dramatically increase the number of Afghan security troops would require a major influx of U.S. trainers, who are already in critically short supply.

The proposals, announced late last week by Secretary of Defense Robert Gates, come as the U.S. military is widely expected to increase troop levels in Afghanistan, where American casualties have exceeded those in Iraq this summer amid a growing insurgency.

The change in the command structure, which could go into effect this month, would put some 19,000 U.S. troops currently operating outside NATO&#8217;s International Security Assistance Force, or ISAF, under the command of U.S. Gen. David McKiernan, the NATO commander in Afghanistan.

McKiernan already commands about 15,000 U.S. troops as part of ISAF, which also includes 38,000 troops from other countries.

The switch would be especially welcome to U.S. trainers in southern Afghanistan, who now fall under the separate American command known as Operation Enduring Freedom, but who operate alongside NATO troops from Canada and the United Kingdom.

"Any time you can have a less confusing chain of command, you&#8217;re better off," said U.S. Army Col. John Cuddy, the commander of U.S. police training efforts in the south. "Right now, sometimes the coordination isn&#8217;t as good as it could be."

"They know their job, but they got here and got something a little different," he said. "It&#8217;s not a typical mission."

But Cuddy warned that U.S. units dedicated to training Afghan security forces are already struggling to fill their ranks.

The so-called Police Mentor Teams, or PMTs, are designed as 16-member units made up of senior officers and noncomissioned officers. But with troops stretched thin, most of the teams are under strength and many of the members are lower-ranking soldiers who haven&#8217;t attended the two-month mentoring course designed to train the trainers.

For example, a team mentoring Afghan National Civil Order Police in rural Kandahar province has 14 members, five of whom have attended the training course &#8212; a figure officers say is representative.

The U.S. military currently has about 15,000 troops training Afghan soldiers and police across the country.

The Pentagon did not release a price tag for the proposed increase of the Afghan Army from about 65,000 to 122,000 troops, but estimates that it would cost $1 billion to add 10,000 troops and $100 million to sustain them for a year.