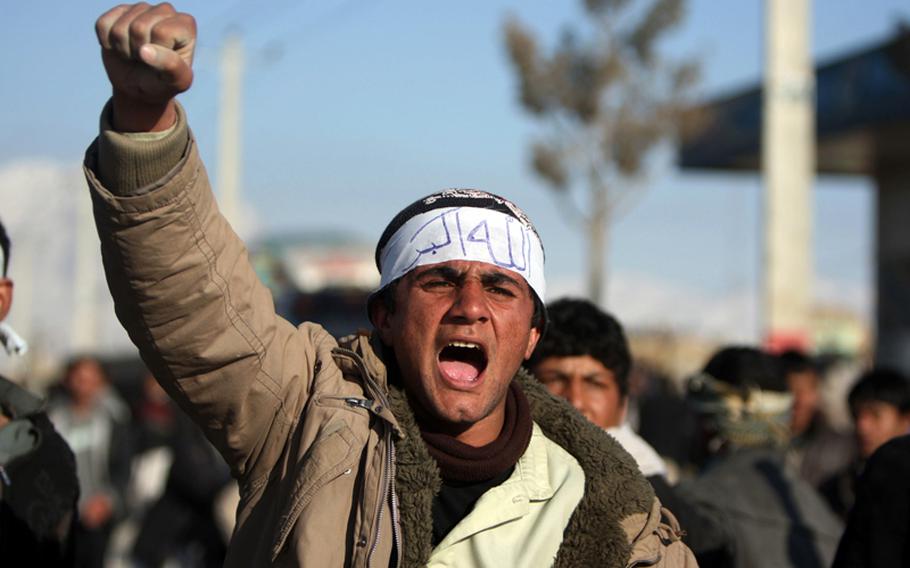 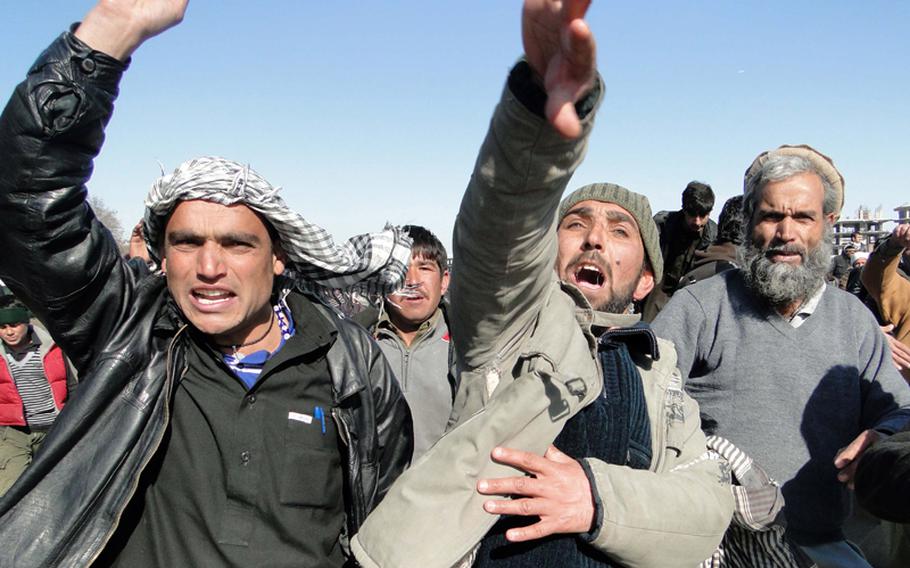 Anti-American protesters gathered on February 24, 2012, in central Kabul, near the Afghan presidential palace, on the fourth day of demonstrations against the burning of Qurans at U.S.-run base. (Ali Safi/MCT)

Despite an apology from President Barack Obama and a plea for calm from Afghan President Hamid Karzai, violent protests racked Afghanistan again Friday, the fourth day of upheaval over coalition soldiers burning Qurans at a U.S. base.

Twelve people were reported killed in the deadliest day of demonstrations so far, as Afghan security forces clashed with protesters across the country one day after an Afghan soldier shot and killed two U.S. soldiers.

Late Thursday, U.S. Gen. John Allen, NATO&rsquo;s commander in Afghanistan, visited the U.S. base in Nangarhar province where the soldiers were slain and urged troops to resist the impulse for retribution.

Allen, who earlier this week publicly apologized for the burning of the Qurans, said Friday that coalition and Afghan officials would continue to investigate the incident.

&ldquo;Working together with the Afghan leadership is the only way for us to correct this major error and ensure that it never happens again,&rdquo; he said in a statement.

More than 20 people have died since protests erupted Tuesday following reports that soldiers at Bagram Air Field burned several copies of the Quran removed from the base&rsquo;s detention facility. Coalition officials said detainees had written &ldquo;extremist&rdquo; messages in the texts.

Afghan officials reported that police killed six people during protests in the western city of Herat, a region of the country that has remained relatively stable since the U.S.-led war against the Taliban began in 2001.

In Kabul, the nation&rsquo;s capital, the largest of several marches drew an estimated 4,000 people. Shouts of &ldquo;Death to America!&rdquo; rose into the crisp afternoon air as some protesters threw stones at police. The U.S. Embassy and United Nations compounds remained locked down.

Thousands turned out to protest in Baghlan province to the north and in the eastern provinces of Khost, Laghman and Nangarhar. Police fired warning shots during some of the demonstrations to gain control of the crowds.

Afghan officials had worried that public anger would intensify on Friday, the Muslim holy day of the week. Their fears were realized soon after prayers finished in the early afternoon and mosques started emptying out.

Karzai&rsquo;s call for peace earlier in the week, an appeal openly contradicted by several members of parliament, appeared as futile as Obama&rsquo;s letter of apology, which Ryan Crocker, the U.S. ambassador to Afghanistan, delivered to Karzai on Thursday.

Dr. Mahmood Khan, who represents Kandahar province, said in an interview Friday that he supports the protests and advocates punishment for the soldiers who burned the Qurans.

But he added that &ldquo;other countries&rdquo; were sending people into Afghanistan to exploit the &ldquo;clean feelings&rdquo; of protesters and incite violence.

&ldquo;They are coming here and misusing the demonstrations for propaganda,&rdquo; he said.

Afghan officials have long blamed elements within Pakistan, where protests over the Quran burning had spread by Friday, for funding and directing the Taliban-led insurgency that has plagued Afghanistan for more than a decade.

Experts on Afghanistan suggest that, while Afghans feel genuine anger over the Quran desecration, the Taliban has sought to manipulate that collective ire for its own purposes.

&ldquo;You have small groups of people here who skillfully influence the Afghans and can mobilize protests with several thousand people,&rdquo; said Davood Moradian, a former Karzai adviser and an assistant professor of political science at The American University in Kabul. &ldquo;They are very good at tapping into emotions.&rdquo;

Those emotions simmer near the surface in a country weary of war and facing a future that may be even more violent than its recent past.

&ldquo;There&rsquo;s a lot of pent-up anger and frustration,&rdquo; said Martine van Bijlert, co-director of the Kabul-based Afghanistan Analysts Network. &ldquo;So when something like (the burning of Qurans) happens, the groups that want to start up trouble know they can do so very quickly.&rdquo;