Afghanistan steps up effort to keep tabs on police Cpl. Eric Meyer of the 118th Military Police Company talks with an Afghan policeman earlier this month in Jalrez valley in eastern Afghanistan&#39;s Wardak province. A plan is under way to register the Afghan National Police. (Geoff Ziezulewicz / S&S)

Cpl. Eric Meyer of the 118th Military Police Company talks with an Afghan policeman earlier this month in Jalrez valley in eastern Afghanistan&#39;s Wardak province. A plan is under way to register the Afghan National Police. (Geoff Ziezulewicz / S&S) An Afghan National Police officer waits in the back of a pickup truck with a machine gun before a meeting in August with tribal elders in the village of Osman Kheyl, in Kandahar province in southern Afghanistan. (Drew Brown / S&S) 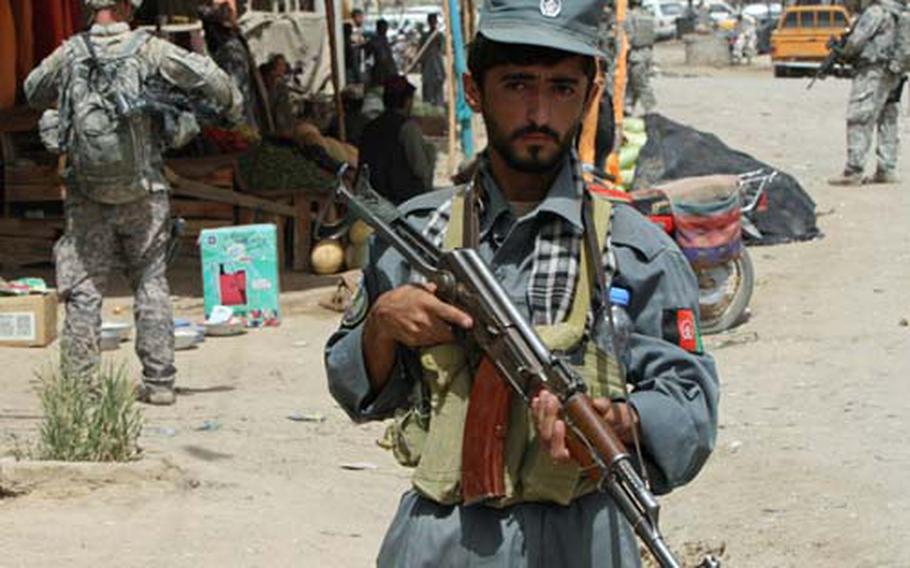 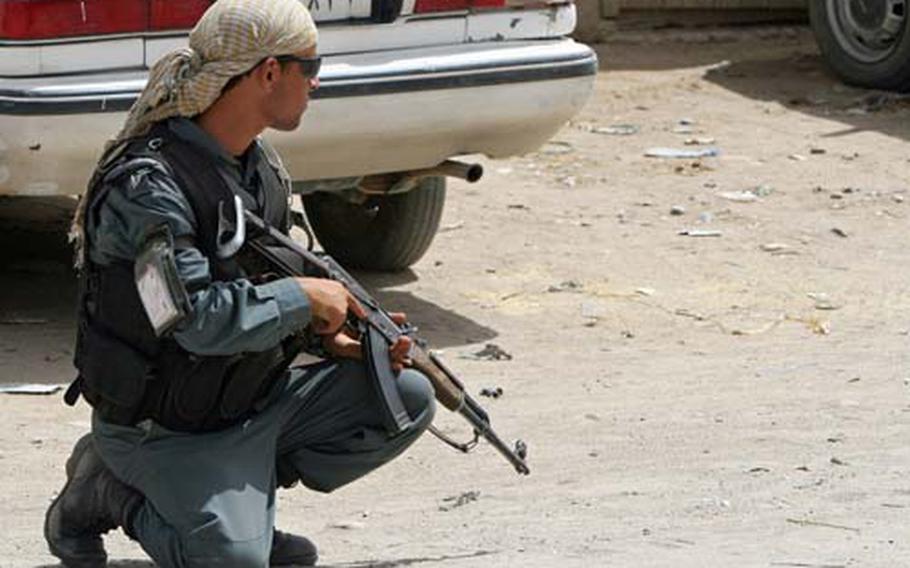 An Afghan National Police officer crouches during a halt while on foot patrol in the Maywand district bazaar, in Kandahar province. U.S. advisers are training and mentoring Afghan police in southern Afghanistan as a first line of defense against Taliban insurgents. (Drew Brown / S&S)

WARDAK PROVINCE, Afghanistan &#8212; In a step toward more accountability, the Afghan government is starting to collect vital information on the 95,000 members of the national police, a force that has become synonymous with unprofessionalism and corruption.

Fingerprints, facial recognition points, weapon serial numbers and other data on Afghan National Police began to be collected in October as part of a program called the Personnel Asset Inventory.

The Ministry of the Interior has registered 16,000 police officers so far in Kabul and 2,700 in Kandahar, about half that province&#8217;s force, according to Army Lt. Col. David Hylton, spokesman for NATO Training Mission-Afghanistan.

The second phase of the registration is just beginning in key districts throughout the south, and the program will expand to the rest of the country next month, Hylton said in an e-mail. He says the program is Afghan-led, with mentoring and other assistance from NATO. The Combined Security Transition Command-Afghanistan is funding the effort, which will cost about $95,000.

In addition to the biometric and weapon information, policemen are undergoing drug tests and some will receive retinal scans as they gather at their respective provincial capitals to be registered. The biometric information will be compared with similar registries such as those compiled by NATO forces on detainees and suspected insurgents. A similar inventory of the Afghan National Army is in the works as well, Hylton said.

Policemen who don&#8217;t show up for the inventories will be dropped from the payroll, Hylton said. New recruits will provide similar information and undergo screenings as well.

The efforts are in line with President Hamid Karzai&#8217;s inaugural address last week, in which he said he wanted Afghan security forces to take the lead in keeping the country secure within five years. But critics are skeptical the forces can improve that quickly.

A report issued this year by London&#8217;s Royal United Services Institute and the Foreign Policy Research Institute says that Afghan police officers are generally underpaid, illiterate and suffer from high levels of drug use. The illiteracy "restricts the quality of recruits, the effectiveness of police training, and even their ability to write reports and record critical information," according to the report.

British officials say that 60 percent of the ANP in southern Afghanistan&#8217;s volatile Helmand province use drugs, according to the report.

Taliban infiltration of the ranks and bribe-taking are also recurring concerns about the ANP, which have a broad range of duties, including general policing, counterinsurgency, border control and countering narcotics production and distribution.

Hylton said the only challenges so far in registering the ANP have been "the normal challenges you face in Afghanistan &#8211; transportation, communications, weather and so on."

No officers have been dropped from the rolls yet, he said. After the inventory is completed, the rolls will be scrubbed and personnel on leave, hospitalized or out of the country for training will be cross-checked on the list. The Interior Ministry will then drop the no-shows who didn&#8217;t have an excuse not to be registered, he said.

Meanwhile, an electronic payment system was put in place this year to try to ensure that paychecks wind up in the pockets of police officers. A major crimes task force was announced this month to better ferret out government corruption, including in the security forces.

The 118th Military Police Company in Wardak province west of Kabul has been trying to conduct its own inventory of ANP members for the past few months, but the effort has been hindered by security and logistical challenges, said Capt. Kendall Robinson, the company commander.

The company&#8217;s effort to track members of the ANP took on greater urgency after the 118th&#8217;s Pfc. Brandon Owens and Sgt. Aaron Smith of the 2nd Battalion, 87th Infantry Regiment were killed by a rogue policeman in the province on Oct. 2.

"It helps us confirm what we see every day, who we&#8217;re working with," Robinson said.