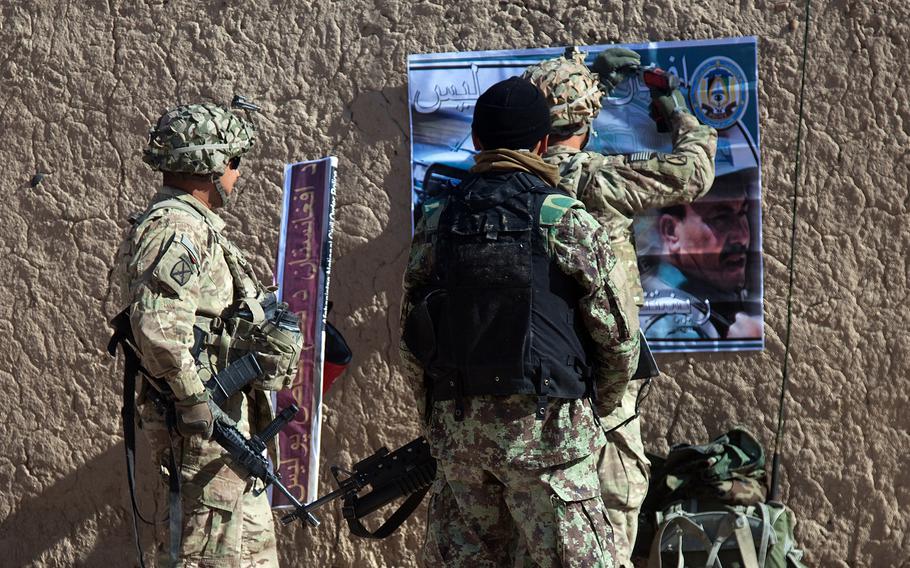 U.S. troops and an Afghan National Army soldier hang a poster on a wall at the Usmankhel Village, Kandahar province, Afghanistan, Dec. 18, 2011. (U.S. Department of Defense)

Towns in the Wild West often had “Wanted” posters offering a reward for helping catch a bad guy.

Southern Afghanistan has a lot in common with the Wild West including regular gunfights and wanted posters alerting servicemembers to various folk who the authorities are looking for.

Lately, jokers at the base have taken to adding their own comments to some of the wanted posters.

A recent target for the graffiti artists was a poster that warned people to watch out for an Afghan National Army soldier, who escaped from custody after he allegedly shot at foreign troops.

The posters stated that his whereabouts were unknown, but somebody had written “in Pakistan” on one of them.

They also advised people who saw the fugitive to detain him, but someone had scrawled “shoot on sight” on another.

Not all of the bad guys on the wanted posters are terrorists.

Some feature a police sketch of someone, who could be a member of the military, suspected of a sexual assault.

Another person featured on posters may be living with a guilty conscience. One advises personnel to be on the lookout for someone in a U.S. Army uniform who, possibly by accident, fired a gun inside one of the base dining facilities. Apparently, there’s security camera footage of a person fitting that description fleeing the scene.

Kandahar’s Role 3 hospital is the most sophisticated medical facility in Afghanistan. It boasts state-of-the art operating theaters where skilled surgeons work to save the lives of troops wounded in action.

Right next door, is a less well known but no less impressive Role 3 Veterinary Clinic where the military’s top animal doctors provide a similarly high level of care to military working dogs wounded on the battlefield.

There are still more than 50,000 U.S. military personnel in Afghanistan, according to official figures, but how many military working dogs are deployed there?

That’s classified, according to Grimm, although he was willing to reveal that the combat pooches are all German shepherds and Belgian Malinois trained to sniff out explosives or drugs, or do “bite work.”