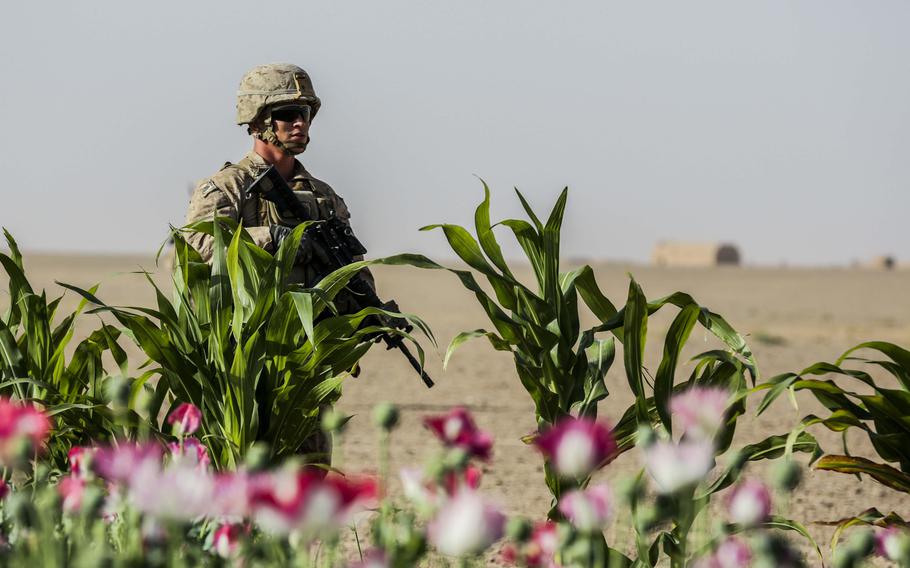 Opium production has nearly doubled in Afghanistan in 2017, reaching a record high, according to a joint survey by the Afghan government and the United Nations.

In the report released Wednesday, the Ministry of Counter Narcotics and the U.N. Office of Drugs and Crime said opium production jumped to 9,000 metric tons (9,900 tons) so far in 2017, up 87 percent from 4,800 metric tons last year.

Several bombings carried out by the insurgents or an offshoot of the Islamic State group operating in Afghanistan, including high-profile attacks in the capital of Kabul, have highlighted a worsening security situation this year.

The rise in production comes as the U.S. and NATO are preparing to send thousands of more troops to Afghanistan under President Donald Trump’s strategy intended to shift the balance in what military officials have described as a declining stalemate in the 16-year war against the Taliban. The insurgents rely heavily on opium production to fund their operations.

Afghanistan is the world’s top cultivator of poppies, which produce a sticky, yellow residue that is used to make heroin and opium. The annual harvest — estimated to be worth about $1.4 billion — accounts for about 7 percent of the country’s gross domestic product.

During their brief reign that began in the late 1990s, hard-line Taliban Islamists virtually eradicated opium production in the country at the urging of the U.N.’s counternarcotics agency. This slashed the world’s poppy production by three-quarters in the summer of 2001. Their regime was cut short by the U.S.-led invasion later that year, after the terrorist attacks of Sept. 11. Since then, production has continuously expanded.

Nearly 60 percent of the country’s opium, about 5,200 metric tons, was produced in the country’s south, which includes the insurgency’s heartland, the survey said.

“It is high time for the international community and Afghanistan to reprioritize drug control,” UNODC Executive Director Yury Fedotov said in a statement.

Despite eradication efforts in 14 provinces, cultivation of the crop expanded this year to three new provinces — Ghazni, Samangan and Nuristan. A record 328,000 hectares (810,500 acres) was under cultivation, compared with 201,000 hectares in 2016, researchers found.

In southern Helmand province, where in the past seven months the Marine-led Task Force Southwest has aided Afghan forces in beating back a Taliban offensive, production has spread to nearly 64,000 hectares.

Besides political volatility, conflict and corruption, a lack of jobs and education also affect farmers’ decisions to grow the illicit crop, the survey’s authors said. A shift in the Afghan government’s focus on battling insurgents in densely populated urban areas may have left rural populations vulnerable to greater insurgent influence, leading to the increased cultivation.

The Taliban are reported to be in control of more territory now than at any time since they were ousted from power 16 years ago.