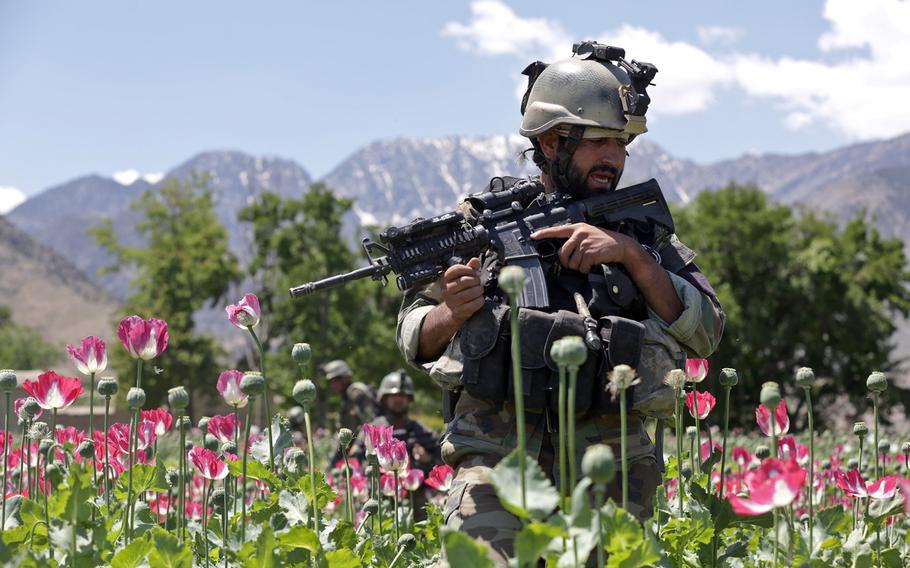 An Afghan National Army commando leads the way on a patrol through a poppy field during a clearing operation in the Khugyani district of Nangarhar province, Afghanistan, on May 9, 2013. ( Kaily Brown/U.S. Army)

Opium poppy cultivation in Afghanistan surged to record heights in 2013, increasing for the third straight year in a row and confirming the country’s status as the world’s No. 1 exporter of the opium crop.

According to the United Nations Office on Drugs and Crime’s annual Opium Survey, published in November, two factors were behind the rise in cultivation: high opium prices and speculation due to the withdrawal of U.S. and international troops from Afghanistan. Cultivation of the crop spread to two previously poppy-free provinces, Faryab and Balkh, in northern Afghanistan.

In an interview with Stars and Stripes, Yury Fedotov, head of the United Nations Office on Drugs and Crime, said the ability of international organizations to continue working in Afghanistan and combating the trade would partly depend on the size of the international presence after 2014, when U.S. combat troops are slated to withdraw. Whether U.S. and NATO forces remain depends on a bilaterial security with the U.S., which is being held up by Afghan President Hamid Karzai.

“Many of these activities are linked to the support of (the) international presence in Afghanistan,” Fedotov said. “We need to help Afghanistan to restructure its economy and ensure sustainable development after the withdrawal of foreign forces from this country.”

Eradication efforts throughout the country declined in 2013. A total of 7,348 hectares — some 18,157 acres — of verified eradication was carried out by Afghanistan’s governors, a decline of 24 percent from 2012.

The major uptick in poppy cultivation this year has been an unwelcome reminder of the uncertain allegiances after U.S. troops leave the country. While the UNODC says it has programs in place that are meant to give Afghan farmers an alternative crop choice, those programs have been largely unsuccessful.

“It’s hard for or them to sell their products,” Fedotov said, “while they don’t have such a problem when they’re growing opium poppy.”

And as U.S. troops pass responsibility for security to the Afghan National Security Forces, the flow of drugs from Afghanistan to the rest of the world is likely to continue.