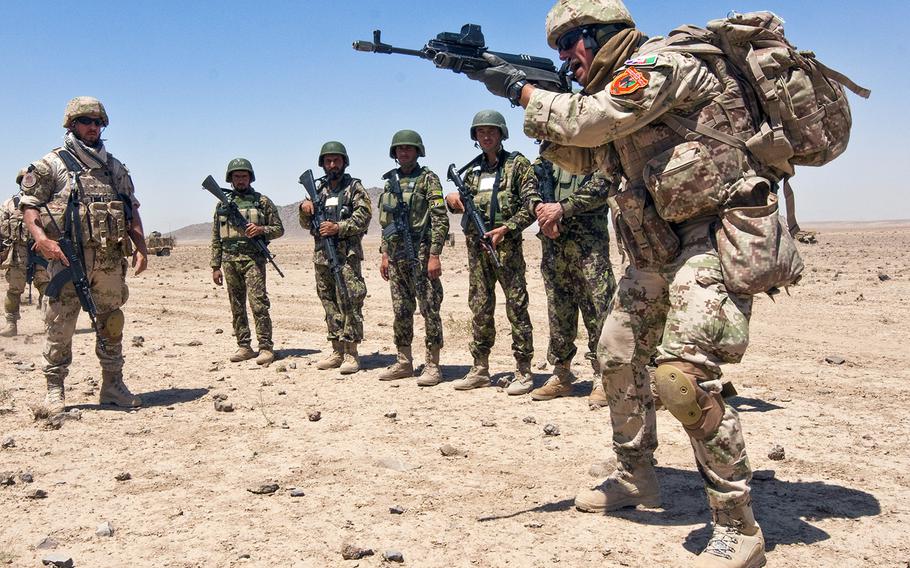 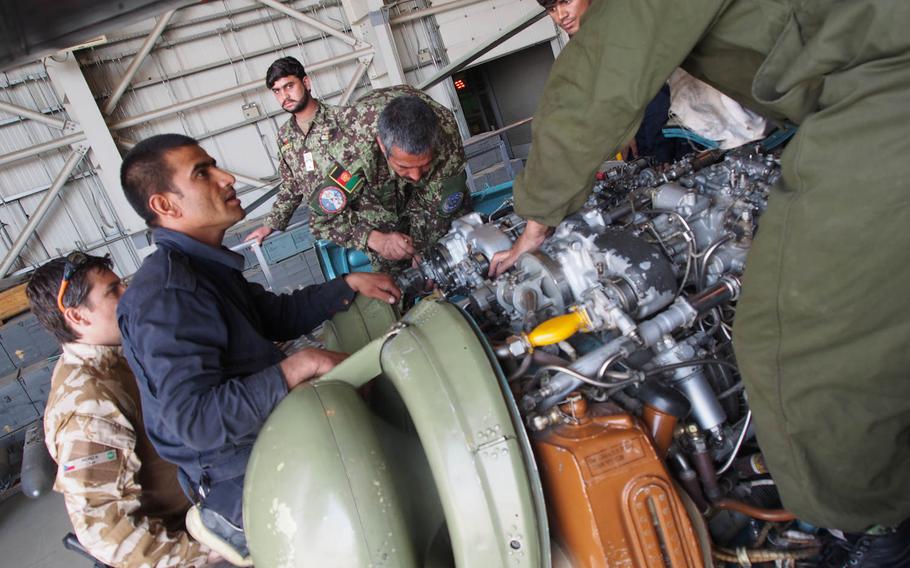 Buy Photo
Afghan Air Force personnel perform maintenance on a helicopter while under the watch of Czech advisors. With no guarantees that foreign troops will be in Afghanistan past the end of the year, NATO trainers are trying to get the air force self-sustaining by the end of 2014. (Heath Druzin/Stars and Stripes)

After nearly 13 years of war in Afghanistan, NATO leaders had hoped at this week’s summit in Wales to hail the first democratic transition of power in the country and to reaffirm a commitment of military and monetary support beyond the departure of international combat troops at the end of the year.

But the leadership crisis that has ensued from a disputed presidential election and significant fighting between insurgents and Western-trained Afghan forces in many areas of Afghanistan threaten to undermine NATO’s message of progress and its future commitment to the country’s stability.

The most recent evidence of that uncertainty is the fact that the two presidential candidates — Abdullah Abdullah and Ashraf Ghani — decided Sunday not to attend the meeting so they could continue talks toward forming a new joint government.

Instead, Defense Minister Bismillah Mohammadi will lead a delegation from the current Afghan government, which will also include the ministers of economy and foreign affairs.

While U.S. and NATO officials acknowledge the complications caused by the political uncertainty, they insist that the problems don’t detract from the NATO-led coalition’s achievements.

In a State Department blog post on Thursday, U.S. Ambassador to NATO Douglas Lute gave a taste of the message NATO will likely embrace: The alliance is ready to help, but only if the Afghans do their part.

“After 12 years, NATO can be proud of its legacy in Afghanistan,” he wrote. “And NATO’s commitment doesn’t end when ISAF’s combat mission ends at the end of 2014. We will provide the tools and the training, and the Afghans will provide the courage and the will to succeed. Much remains to be done but Afghanistan’s future is in the hands of Afghans, while NATO stands ready to support.”

NATO Secretary-General Anders Fogh Rasmussen said Monday the conclusion of the electoral process was “vital,” but he was upbeat ahead of the summit.

"We have done what we set out to do,” he said at news conference in Brussels. “We have denied safe haven to international terrorists. We have built up capable Afghan forces of 350,000 troops and police. So our nations are safer, and Afghanistan is stronger. "

But the foundation for that future support remains very much in question because of the presidential election, which has dragged on for months amid allegations of widespread fraud and threats of splinter governments or civil unrest.

At stake is the future presence of international troops, as well as the billions of dollars in foreign aid that Afghanistan’s government depends on — among other things, to pay the salaries of the Afghan military and police, who have largely taken over responsibility for countering the Taliban insurgency.

Troop levelsKarzai has refused to sign a bilateral security agreement that would set the terms for nearly 10,000 American troops to remain in Afghanistan into next year, mostly as advisers and trainers. A similar agreement with NATO has been held up because of its dependence on the American presence.

Both presidential candidates have said they would sign the deal, and NATO leaders had hoped to welcome the new president at the summit. But the impasse over the runoff vote has prevented the inauguration of a new head of state.

“We are approaching the definite deadlines now,” NATO’s senior civilian representative to Afghanistan, Maurits Jochems, told reporters in Kabul in mid-August. “Soon we will have to take tough decisions because if there isn’t a legal basis for our continued presence in Afghanistan, we will have to withdraw everything by the end of the year.”

Without the agreement, which would protect American troops from local prosecution, among other issues, U.S. officials say they would be forced to withdraw all their forces.

That’s a scenario that few officials in or out of Afghanistan favor, but analysts say the possibility looms larger every day the agreement remains unsigned, with the clock ticking toward the end of the year.

Ahmad Majidyar, an analyst with the American Enterprise Institute, said NATO allies had hoped that a successful election would have enabled a smooth transfer of power "But the unending political crisis in Kabul and the latest upsurge of Taliban violence across the country make it difficult for NATO leaders to boast about achievements, justify troop withdrawal, and plan for post-2014 support mission in Afghanistan," he said

Analyst Luke Coffey expressed a similar view in a recent brief for the conservative Heritage Foundation. “NATO should avoid using the summit as a victory lap for its mission in Afghanistan,” he wrote “Recent events in Iraq show what happens when the U.S. fully disengages after combat operations end. The end-of-2014 deadline for Western-led combat operations is not the end of the war but simply a continuation of the [anti-insurgency] campaign led by the Afghans and supported by the international community.”

For months now, top officials from NATO and its member countries have been pushing for a resolution to the Afghan election crisis in time for the summit, but even the most optimistic estimates are that an audit of disputed ballots won’t be completed until almost mid-September.

U.S. Secretary of State John Kerry twice flew to Kabul to try to mediate and head off a crisis that some fear could lead to broader fighting and chaos as the international coalition departs at the end of the year. Officials from the U.S. and other donor countries have repeatedly told Afghan leaders that future aid is contingent on a successful and peaceful transfer of political power.

International aidSince the U.S. toppled the Taliban regime in 2001, it has contributed nearly $93 billion in assistance to Afghanistan, of which more than $56 billion has been spent training, equipping and supporting Afghan security forces, according to a Congressional Research Service report released in July.

During past meetings, including the last NATO summit in Chicago in 2012, international donors assumed that the size of the Afghan forces would drop from its current level of more than 350,000 to about 228,000 after 2014. On the basis of that assumption, it was determined that about $4.1 billion per year would be necessary to fund those forces.

But while neither NATO nor the Afghan government has confirmed future numbers, it is widely expected that the increasingly bloody fighting will require the government to continue to field about 350,000 troops and police into the foreseeable future, requiring about $6 billion per year.

According to the CRS report, even the $4.1 billion amount was considered difficult to raise, with many countries’ contributions still unspecified.

It’s not clear what specific decisions, if any, NATO leaders will be making at the summit given the continued uncertainty. But NATO officials say they will be sending a signal that they are prepared for a long-term commitment.

Had the election been decided according to its original schedule, a new president could have attended the NATO summit, allowing the alliance to focus on plans for future troop levels, as well as providing Afghan officials an opportunity to push for continued aid.

“It makes it difficult for Afghanistan to advocate for itself at this crucial moment,” said Graeme Smith, a Kabul-based analyst for the International Crisis Group. “They are making the case for more aid already, but this really complicates it.”