Afghanistan's economy is seen as 'not sustainable' 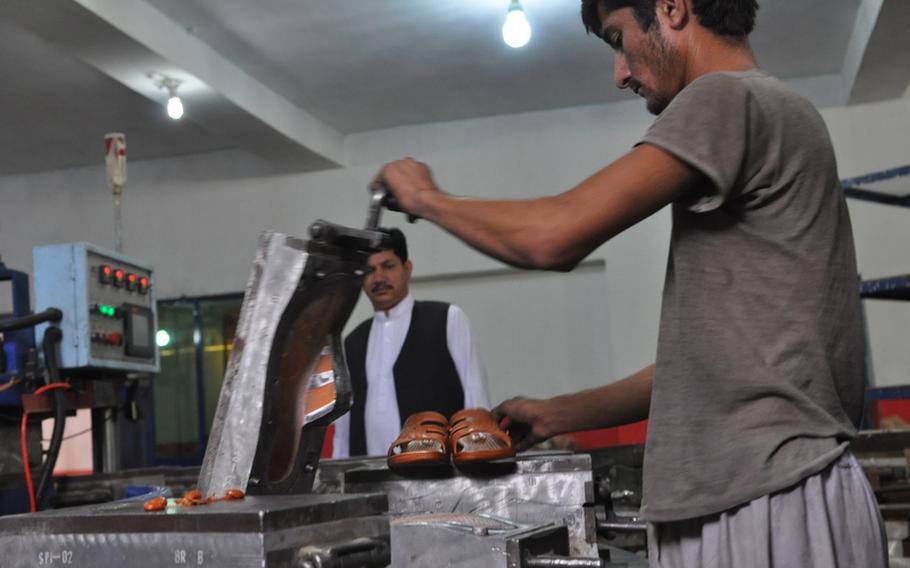 A worker pulls sandals out of a mould at Shorhat Plastics factory in Kabul as company owner Abdul Jaffar Safi looks on. Safi, president of the Afghan Industrial Association, a trade group representing more than 1,200 Afghan manufacturers, says many are struggling as international organizations and money start to decrease. (Heath Druzin/Stars and Stripes)

A worker pulls sandals out of a mould at Shorhat Plastics factory in Kabul as company owner Abdul Jaffar Safi looks on. Safi, president of the Afghan Industrial Association, a trade group representing more than 1,200 Afghan manufacturers, says many are struggling as international organizations and money start to decrease. (Heath Druzin/Stars and Stripes) 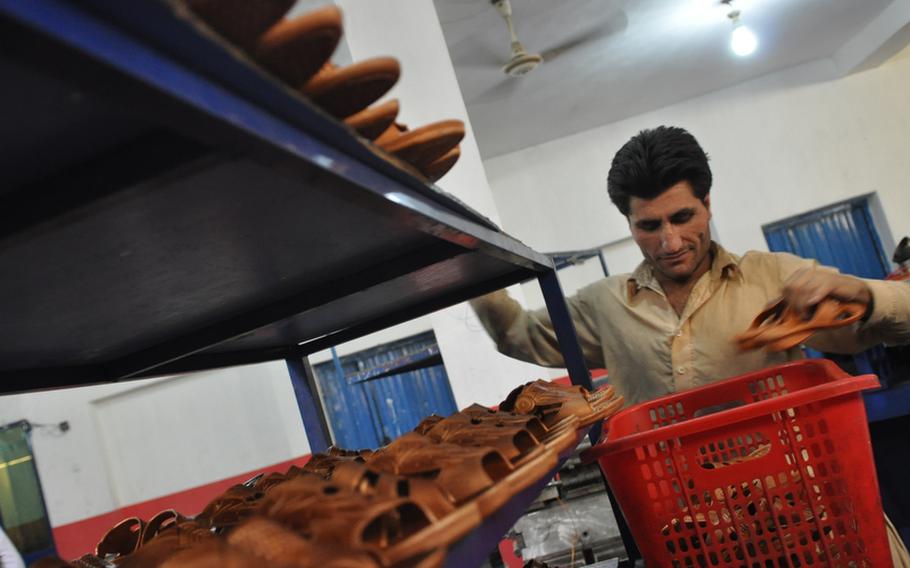 A worker sorts sandals at the Shorhat Plastics factory in Kabul. Sales at the factory, as at many Afghan businesses, have slumped as international organizations and militaries begin scaling back operations in Afghanistan. (Heath Druzin/Stars and Stripes)

KABUL &mdash; While waiting to speak to Afghanistan&rsquo;s finance minister about the future of the Afghan economy, two visitors recently got a sense of the present when they were served the customary cup of tea. The red, white and blue mugs read, &ldquo;USAID: From the American people.&rdquo;

Much has been made about the $16 billion pledge of aid to Afghanistan at the Tokyo Conference earlier this month, but with militaries scaling back operations and aid money drying up, the future of the Afghan economy, tied so tightly to foreign money and riddled by endemic corruption, looks bleak.

According to the World Bank, 97 percent of Afghanistan&rsquo;s gross domestic product comes from foreign money, largely from aid groups and military provincial reconstruction teams, not to mention the many jobs created by sprawling military bases hungry for interpreters and laborers and international organizations willing to pay high salaries and inflated rents.

With militaries rapidly withdrawing &mdash; by the end of August there will be 23,000 fewer U.S. troops in the country than there were at the beginning of the year &mdash; and aid money expected to drop sharply in the coming years, an economy almost entirely dependent on outside money will have to adjust, and many experts see a painful transition ahead.

&ldquo;The whole economy is dependent (on foreign money). The whole economy is not sustainable; that&rsquo;s why, as we move forward, the aim should be to help Afghanistan&rsquo;s self-reliance,&rdquo; Afghan Finance Minister Hazrat Omar Zakhilwal said.

Aid from Afghanistan&rsquo;s largest donor, the United States, dropped from $4.1 billion in 2010 to $2.5 billion in 2011, according to Oxfam, and the World Bank has estimated that overall aid to the country could drop as much as 90 percent by 2025.

Trade group President Abdul Jaffar Safi&rsquo;s constituents are nervous. They&rsquo;ve seen a 30 percent drop in business in just the past year. The struggles of the Afghan Industrial Association, which represents more than 1,200 manufacturers, including some of the country&rsquo;s largest, could be a bellwether for the country.

&ldquo;Already there is a decrease in production as well as sales,&rdquo; he said. &ldquo;It&rsquo;s having a big effect on Afghan manufacturing.&rdquo;

Safi&rsquo;s own plastics factory, located down a pitted dirt road on the ragged industrial edge of eastern Kabul, has seen a similar drop in business, even though the inexpensive shoes and sandals he pumps out are aimed at Afghan buyers.

But as foreign money dries up and jobs dwindle, many Afghans have less money to spend at the local bazaar. Safi worries that if business continues to decline, he may have to lay off some of the 160 employees of Shorhat Plastics.

Ghulam Mabi Yousofi has been in the carpet business for nearly 40 years, taking over a family business started by his grandfather. As violence in the country scared off the traders who used to come to Afghanistan and buy Yousofi&rsquo;s carpets in bulk, he relied more and more on foreigners &mdash; both in the military and from international organizations &mdash; for his business.

For the past two years, his shop has been struggling as his main customer base has dwindled. He&rsquo;s even debating whether to keep his place at the weekly Afghan bazaar at the International Security Assistance Force headquarters, a once-lucrative market that has dried up. Last time he was there, he sold nothing, having to swallow the $100 cost of renting space and transporting all of his wares across town.

&ldquo;When the foreigners are gone, the whole carpet business will stop,&rdquo; he said. &ldquo;A person cannot eat the carpet &mdash; you have to sell it.&rdquo;

With the exodus of foreigners, many of Afghanistan&rsquo;s most qualified young people also are likely to be out of a job.

Young, educated English speakers are sought after by militaries and aid organizations looking for translators and advisers. As those organizations scale back operations, unemployment, already estimated at more than 35 percent, is likely to worsen, said Hamid Ullah Farooqi, an economics professor at Kabul University and the former minister of transportation and aviation.

Most of Farooqi&rsquo;s students say they are looking for ways to leave the country, and he doesn&rsquo;t blame them &mdash; the post-aid landscape looks bleak.

&ldquo;I don&rsquo;t see any place to create jobs,&rdquo; he said.

Part of the problem?

With so much of the economy reliant on foreign aid, finding sustainable income will be crucial for Afghan businesses, farmers, and the government, but many of the country&rsquo;s most promising revenue sources are contingent on improved security, which is still a shaky proposition.

Zakhilwal, the Afghan finance minister, would like to restore Afghanistan to its former place as an exporter of agricultural products like raisins and dried fruits, though that will take a leap in infrastructure and persuading poppy farmers to grow less lucrative crops.

Long part of a trade route along the Silk Road, Afghanistan could once again be a transit hub for goods moving from South Asia to Central Asia and from China to the Middle East, Farooqi said. Those overland routes, though, require improved security, and as the recent bombing of 22 NATO supply trucks in normally quiet Samangan province showed, there is a long way to go. With fewer international troops and financial aid promised for only so long, it could be even more difficult to protect long-haul truckers in the coming years.

&ldquo;We don&rsquo;t know what&rsquo;s going to happen after 2015,&rdquo; Farooqi said, referring to the last year of the pledge of financial aid to Afghanistan made by the international community at the recent Tokyo Conference.

Many blame short-sightedness on the part of aid organizations, such as the U.S. Agency for International Development, for creating both unsustainable projects and a handout culture that has left many Afghan businesses unable to compete without assistance. USAID, the largest provider of aid in the country, has been repeatedly criticized in Government Accountability Office reports for poor oversight of projects and lax vetting of contractors both in Afghanistan and Iraq.

&ldquo;That&rsquo;s their response &mdash; to spend the money and write a report,&rdquo; he said. &ldquo;It&rsquo;s just a waste of time and a waste of money.&rdquo;

Many of the aid workers implementing projects live in walled compounds in Kabul and rarely visit their projects, let alone speak to Afghans who might use them, said Martine van Bijlert, co-director of the Kabul-based Afghanistan Analysts Network.

&ldquo;The international community just doesn&rsquo;t really know how to do sustainable aid,&rdquo; she said. &ldquo;They don&rsquo;t know how to fix a country, and they&rsquo;ve been satisfied spending enormous amounts of money without knowing [what works] and without wanting to find out. The bulk of the money has made relatively few people rich.&rdquo;

Interviewed Monday, a U.S. Embassy official in Kabul said American government aid projects are often caught between trying to stem insurgent activity in the short-term &mdash; such as helping farmers get their goods to market to build trust in the Afghan government &mdash; and building something the Afghan government is ready to maintain down the road.

&ldquo;Sustainability is critical, but it&rsquo;s a complex question,&rdquo; the official said. &ldquo;If we don&rsquo;t build the highway until we&rsquo;re sure the government can fix the potholes on it, we&rsquo;re not fulfilling the mandate that we&rsquo;re getting from Congress.&rdquo;

Beating back corruption is another mammoth challenge. According to Transparency International, Afghanistan ranks as the world&rsquo;s fourth-most corrupt country, and business owners complain about having to pay bribes for even the smallest transactions.

In reassuring the international donors meeting in Tokyo, President Hamid Karzai vowed to fight graft in his government, but that pledge has met with much skepticism in Afghanistan.

&ldquo;The legal economy is going almost to zero; you cannot find a legal economy,&rdquo; Farooqi said. &ldquo;Anyone who is involved in this economy, they are directly or indirectly involved in corruption. Otherwise, they can&rsquo;t compete.

One thing seems sure for the future of Afghan businesses: They&rsquo;ll eventually need to find local customers to replace the foreigners.

For Rostam Yusef Zai, co-founder of Pink Taxi, now is the time to diversify his customer base. The Kabul-based company has catered almost exclusively to foreigners since its founding in 2007, but Zai is now trying to build a base of professional Afghans to soften the blow of a reduced international presence.

&ldquo;In the past few months, we&rsquo;ve had a lot of customers who are Afghans,&rdquo; he said. &ldquo;It&rsquo;s an improvement; it&rsquo;s a development.&rdquo;

Safi, the president of the manufacturer&rsquo;s group, has a plan to promote Afghan-made products. He proudly displays a pair of his sandals, imprinted with &ldquo;Made in AF.&rdquo;

Too many Afghans are buying Chinese- and Pakistani-made goods, he said, and he is spearheading an advertising campaign to prod fellow countrymen to spend their money on locally made products.

But television spots are expensive, so Safi is looking for outside funding.

He&rsquo;s currently in talks with USAID.