Afghanistan presidential candidates key to fate of nation, legacy of US 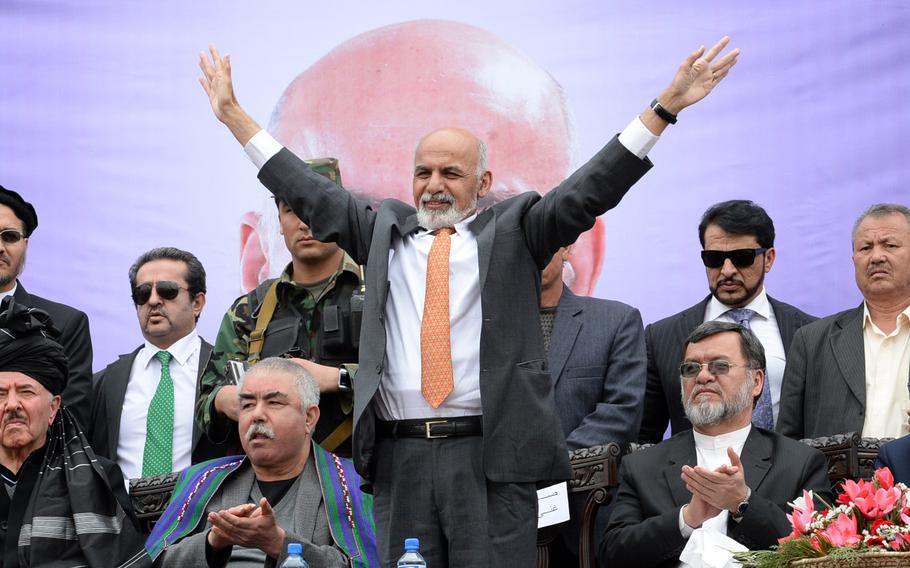 Afghan presidential candidate Ashraf Ghani waves to the crowd at a campaign rally in Kabul. He told supporters that the election represents a chance for the people of Afghanistan to put aside politics and lead. ( Josh Smith/Stars and Stripes)

KABUL — An Islamist and former warlord. A bookish technocrat. The president’s longtime rival and his handpicked man. One of these will likely dictate Afghanistan’s future and the legacy of America’s longest war.

Though they are campaigning across the country as salt-of-the-Earth Afghans, all the major candidates are from the Afghan elite. All have spent significant time abroad. Perhaps most significantly, all have vowed to do what President Hamid Karzai has refused to do: sign a security agreement with the U.S. that would pave the way for a much reduced but continuing international military presence in the country.

Such a presence is seen by many as key to bolstering the Afghan security forces as they continue to battle an entrenched insurgency.

Whether Afghans accept the outcome of the election, the first democratic transition of power in Afghanistan’s history will help determine whether the war-ravaged country moves closer to stability or slides deeper into chaos.

The election also will serve as a litmus test for a mission that has severely tested the 65-year-old NATO alliance and determine the future of Afghanistan’s relationship with the U.S., which has deteriorated to the point of open hostility between Washington and Karzai.

“The path that President Karzai has taken in the past few years has been to blame everything on the international community… it’s very disappointing,” Abdullah told Stars and Stripes during an interview at his compound deep in the Panjshir Valley. “I think that the goodwill that existed a few years ago doesn’t exist there anymore.”

Born in Kabul in 1960, Abdullah graduated from ophthalmology school before joining the Afghan resistance to the Soviet Union. He eventually became an adviser to famed anti-Soviet commander Ahmad Shah Massoud, who was assassinated days before the 9/11 attacks in the U.S.

Abdullah came in second behind Karzai in the 2009 presidential election, but he declined to participate in a runoff after alleging massive fraud on behalf of the incumbent.

If elected, Abdullah promises he will get Afghanistan’s relationship with the West “back on track.”

He says Karzai’s policies toward the Taliban have caused Afghanistan to seek peace negotiations from a position of weakness.

“While the genuine desire for peace should be made clear and genuine effort should be made, at the same time it has to be very clear to the Taliban that, should they choose the path of violence and terrorism, the people in the country will stand united and defend the rights of their citizens,” he said.

Ashraf Ghani A former Afghan finance minister, Ghani earned advanced degrees from Columbia University in international relations and anthropology. He spent almost a decade teaching at Johns Hopkins University and then another 10 years at the World Bank.

That was all before the Taliban regime fell in 2001. Since then Ghani has worked to develop government programs ranging from the plan for a transitional administration and to reorganizing the country’s chaotic finances.

Now his campaign slogan is “change and consistency,” terms that may seem contradictory but indicate that the veteran technocrat wants to continue the policies that he thinks are effective while reforming those that aren’t.

Like other candidates, he supports signing a security agreement with the U.S., but he doesn’t see foreign troops as key to long-term peace in Afghanistan, said his spokesman, Sulaiman Khapalwak.

“You can’t bring peace through fighting,” Khapalwak said. “Peace talks will be the main focus of the approach to the Taliban.” While Ghani would establish a commission to mediate between the Taliban and the Afghan and international governments, he promises no such negotiations for any foreign fighters who may be involved in the insurgency.

Zalmai Rassoul The son of a doctor, Rassoul himself became a doctor after studying medicine in France. After the U.S. invasion of Afghanistan in 2001, he served in several government posts, including Afghanistan’s national adviser and foreign minister.

A longtime confidant of Karzai, he is widely seen as the palace’s man, though his campaign denies getting any help from the government. Though he has been polling behind Abdullah and Ghani, he is likely to get a bump from Karzai’s tacit support.

Along with battling corruption, Rassoul’s first priorities include restarting peace talks with the Taliban.

“Peace is the only solution to the fight,” his spokesman, Javed Faisal, said.

Building a strong relationship with America would also be a top goal of a Rassoul presidency, Faisal said.

“We do need a counterpart to support us, and it’s very good for the United States of America to stay here to eliminate al-Qaida and other terrorist groups, which are in Afghanistan or outside of Afghanistan threatening the security of the world,” he said.

Abdul Rab Rassoul Sayyaf Among candidates with the potential to garner significant votes, Sayyaf is the one who makes the West most nervous. A long-time Islamic hardliner, he has been seen as anti-American who even has a terrorist movement in the Philippines, the Abu Sayyaf, named after him. He fought against the Soviets in the 1980s and commanded a feared militia in the civil war that broke out after Moscow withdrew from Afghanistan in 1989. He is also one of several presidential and vice presidential candidates accused of wartime atrocities — most infamously, a massacre of the minority Hazaras in the early 1990s — though he denies all charges.

A former professor and Islamic scholar, Sayyaf was instrumental in bringing Osama bin Laden to Afghanistan in 1996, though he has since sworn off extremism and condemned terrorism. He is regarded as a fringe candidate but is likely to gain at least enough votes to play spoiler.

During his campaign, Sayyaf has positioned himself as more moderate, saying that Afghanistan needs a Western military presence past the end of this year.

One area where he differs greatly from the other candidates is his uncompromising view on the Taliban. He is critical of Karzai’s overtures to the insurgent group.

“Those who surrender and come back to Afghanistan, they can live here, but those Taliban who are making violence in the country — every day they are killing kids, killing women — Professor Sayyaf won’t make any compromise with them,” Fahim Kohdamani, a spokesman for Sayyaf, said. “We won’t be like the Karzai government.”