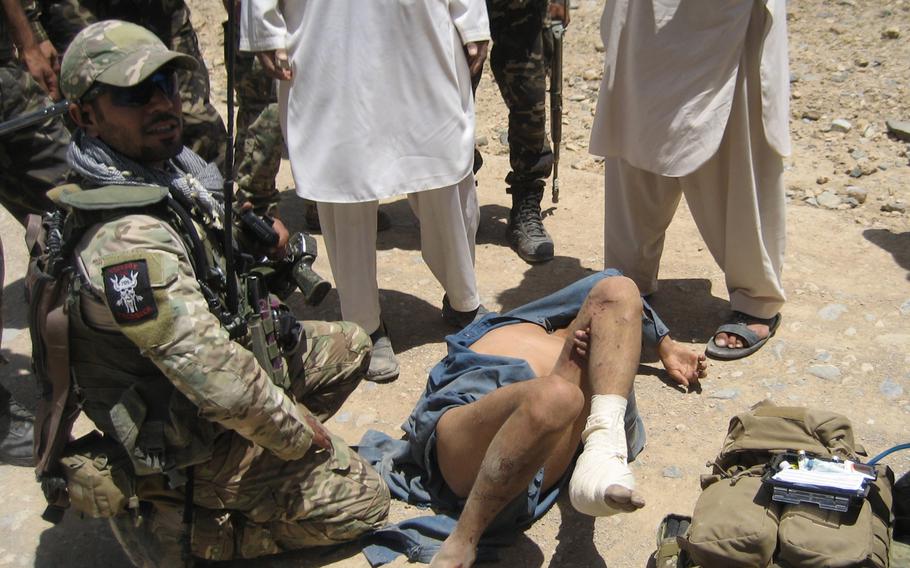 An Afghan soldier tends to a child after a roadside bomb exploded in Logar province, Afganistan, in July 2017. Afghanistan surpassed Syria as the world's least peaceful country, according to a report from an Australia-based think tank. (Courtesy Resolute Support)

An Afghan soldier tends to a child after a roadside bomb exploded in Logar province, Afganistan, in July 2017. Afghanistan surpassed Syria as the world's least peaceful country, according to a report from an Australia-based think tank. (Courtesy Resolute Support) 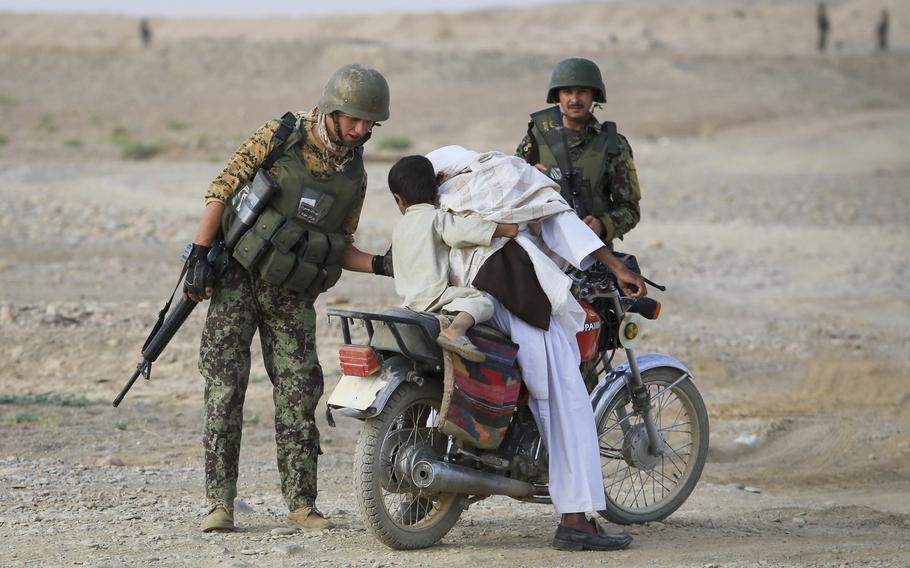 An Afghan soldier helps a child off a motorcycle while conducting searches at a vehicle checkpoint in Shekasteh Tappeh, Helmand province, Afghanistan, July 2014. Afghanistan surpassed Syria as the world's least peaceful country, according to a report from an Australia-based think tank. (Darien J. Bjorndal/U.S. Marines)

KABUL, Afghanistan – Afghanistan is now the least peaceful country in the world and its people are losing confidence in its security forces, according to a new report by an Australia-based think tank.

The country supplanted Syria, which was the least peaceful in 2018. The two countries join South Sudan, Yemen and Iraq in the five least peaceful countries, the nonpartisan Institute of Economics and Peace said in a report released Wednesday.

The report assigns countries a peacefulness score based on perceptions of safety, the presence of armed conflict, and on how much of the country is militarized.

For the first time in five years, the average level of global peacefulness rose in 2018, which the report said was due to conflicts in Ukraine and Syria winding down. The report noted that while the number of conflicts has risen since 2015, due to a rise in nongovernmental groups fighting each other, the total number of deaths from all conflicts has fallen by a quarter.

Afghanistan became the deadliest spot in the world for terrorism, according to a report by the same institute in December. That report noted that one in every four people who died from an act of terrorism in 2017 lived in Afghanistan.

Afghanistan has been at war for much of the last four decades, with American troops fighting in the country since 2001.

Security-related incidents were up 39% during the winter fighting season, compared to a year earlier, according to the Armed Conflict Location and Event Data Project’s data.

People in Afghanistan are also more worried about street crime. Over the last 10 years, people feel less safe, with the average percentage of respondents who say they feel safe walking alone at night falling by 20%.

U.S. diplomats, led by peace envoy Zalmay Khalilzad, have met with Taliban representatives in recent months for several rounds of direct talks that have progressed further than any previous negotiations.

The Trump administration’s South Asia strategy is focused on finding a diplomatic solution to end the conflict and has included an accelerated U.S. bombing campaign against Taliban targets, aimed at pushing the insurgents to the negotiation table.

The talks have not yet included the government in Kabul, which the Taliban views as a U.S. puppet.

Over a period of 10 years, global peacefulness has decreased due to an uptick in terrorism and internal conflict, the report by the Institute of Economics and Peace said.

More people around the world feel they have more freedom in life and their countries are better places to live for ethnic and religious minorities, according to polls cited by the report. However, those polled said that daily feelings of sadness, worry and stress have increased over the same period.

Iceland remains the most peaceful country in the world, a spot it has claimed for the last decade.